Survivors of the bloody Odessa May 2 clashes and subsequent tragedy at Trade Union House, where nearly 50 people were burnt alive, have organized international photo exhibits in order to convey the events with a new clarity denied to viewers by Kiev.

Violent clashes erupted on May 2 between rival rallies of anti-government protesters and radicals supporting the coup-imposed Kiev government. The confrontation led to a tragedy that left 48 people dead and 247 injured, as nationalists burnt the protester camp and then set fire to Trade Unions House with anti-Kiev activists trapped inside. The actual death toll could be much higher, as many of those who managed to escape the flames were then either strangled or beaten with bats by radicals, according to witness reports.

Despite desperate calls from witnesses, Odessa fire brigades came to the scene of the notorious Trade Unions House blaze only 38 minutes after it was reported, leaked transcripts of emergency calls show. The fire claimed the lives of 48 people in May.

The leaked transcripts involve calls which local emergency services reportedly received on the evening of May 2.

“We’ve made the full length documentary about the massacre in Odessa. Please have a look and support our work if you like it!”

The first part of Odessa 5/02 documentary film, compiled of the extensive amount of video footage done on that day by various witnesses and investigated throughout an independent view point. Soon we’ll post the second part that will include further footage, few interviews of survived witnesses as well as the Right sector searches inside of the building later that night. Thank you all, friends, for a positive feedback! We encourage you to rip this video using http://www.clipconverter.cc and re-upload it to your channel in order to spread this material and protect it from being deleted by Youtube. 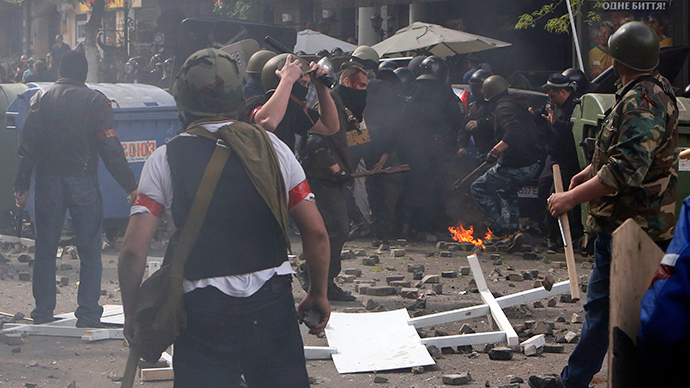 Anti-goverment activists and supporters of the Kiev government clash in the streets of Odessa May 2, 2014 (Reuters / Yevgeny Volokin)

Cities in eastern and southern Ukraine have become battlefields as the junta in Kiev has unleashed military and paramilitary thugs on the people of those regions.

At the same time the media, with its critical role in shaping public opinion, has also become one of the principal theaters in this ongoing conflict, with Western propaganda being one of the most potent weapons.

Andriy Parubiy, the National Security and Defense Council boss of the junta in Kyiv, announced on Sunday the Ukrainian military will expand the “active stage of the operation in towns where extremists and terrorists are carrying out illegal activities.”

The renewed effort to assert control and defeat anti-junta activists and paramilitaries in Donetsk, Sloviansk, Kramatorsk, Kostyantynivk and other towns in eastern Ukraine coincides with news the CIA and FBI will work with the regime to put down popular uprisings against the government in Kyiv.

On Monday, coup Interior Minister Arsen Avakov said the failure of police in Odessa, where violence claimed the lives of dozens of people over the last few days, has resulted in the formation of “Kiev-1,” a paramilitary comprised of “civil activists” who previously worked with the fascist Right Sector and Svoboda to overthrow Ukraine’s elected president in February.

National Security and Defense Council boss Parubiy was the founder of the Social National Party of Ukraine, a fascist political party fashioned after the Nazis. It became Svoboda, a nationalist party led by Oleh Tyahnybok, a prominent member of the Verkhovna Rada, the Ukrainian Parliament.

Sixty-seven anti-government activists detained by police in the south Ukrainian city of Odessa have been released after a crowd of locals blocked the Interior Ministry building. Those released reportedly included survivors from the deadly May-2 fire.

A crowd of Odessa residents, which included many women and elderly people as seen on live video streams from the scene, cheered and hugged the released activists.

– Radicals shooting at people in Odessa’s burning building caught on tape (RT, May 4, 2014):

New video has emerged online which shows a man shooting at the windows of Odessa’s burning House of Trade Unions. At least 39 anti-government activists died in the flames on May 2 in the building besieged and set ablaze by radicals.

A man in the video is wearing a bulletproof vest and is shoots several times in the direction of the burning House of Trade Unions.

At least 31 anti-government activists have died in a fire at Odessa’s Trade Unions House. Some burned to death, while others suffocated or jumped out of windows, the Ukrainian Interior Ministry reported. The building was set ablaze by pro-Kiev radicals.

Some 40 people, including 10 police officers, were also injured in the incident, the official statement said.

A total of 43 people have died in Odessa violence on Friday and 174 others have sustained injuries. Twenty-five of those remain in critical condition, according to Odessa City Council.