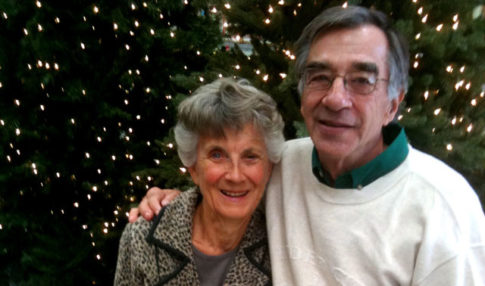 Working for the Gerson Institute, I hear many remarkable stories of people who have used the Therapy to heal themselves. One of these remarkable people is Joyce Forsythe, who just enjoyed another holiday with her family – 7 ½ years after being diagnosed with stage IV mantle cell, non-Hodgkin’s lymphoma. I want share Joyce’s story with you, because it is not only a remarkable testament to the healing power of the Therapy, it also shows how important it is that people know about the therapy before they become ill.

Since it is her story, I will let Joyce tell you about her healing journey, in her own words.

In July of 2005, at the age of 68, I found a mass in my abdomen. PET and CT scans showed my spleen had grown to the size of a football. I had my spleen removed and after a biopsy received a diagnosis of stage IV mantle cell, non-Hodgkin’s lymphoma. My oncologist at Dana Farber recommended a cocktail of four different chemotherapy drugs. He hoped these drugs would put my cancer into remission for a couple of years.

I had learned about Dr. Max Gerson’s therapy 30 years earlier when we lived outside of New York City near his medical practice. As a long-time subscriber to the Gerson newsletter, I had always planned to start the Gerson Therapy if I got cancer. So, I turned down the chemotherapy and told my oncologist that I would do Gerson’s holistic cancer Therapy instead. He reminded me that my cancer was stage IV. Nutrition wouldn’t hurt, but it wouldn’t help. I had read Dr. Gerson’s book and the many patient cases in the newsletters over the years. The oncologist’s warnings were no deterrent for me.