Very few Americans who don’t live near it have ever heard of the Waste Isolation Pilot Plant (WIPP), a federal nuclear waste repository approximately 26 miles east of Carlsbad, New Mexico, but some experts are saying that something very serious happened there recently — something that could affect tens of millions of Americans. However, you’re not likely to read much about it in the institutional media.

According to the Carlsbad Current-Argus, a local newspaper, “traces of radiation” were found in February northwest of the WIPP following tests by the Carlsbad Environmental Monitoring and Research Center, a division of the College of Engineering at New Mexico State University. The tests showed “evidence of trace amounts of americium and plutonium on an air filter” at a nearby sampling station off the WIPP access road.

(Note: Measurements are taken after air passes through the filtration system. Also, the June data is shown in 4-hour intervals, while most in February are around 8 hours.) 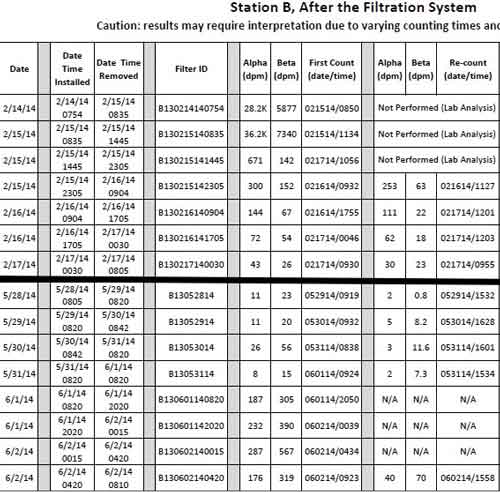 Chris Harris, former licensed Senior Reactor Operator and engineer, June 19, 2014 (at 33:45 in): I do believe the part about it being a hydrogen explosion [at WIPP]– due to the decomposition of the green kitty litter — that causes a whole bunch of problems, and one of them is that this is a huge dirty bomb. >> Full interview here

Insight New Mexico interviews Don Hancock, director of the Nuclear Waste Safety program and administrator at Southwest Research and Information Center, June 12, 2014 (at 4:00 in): They haven’t been able to physically get to the one or more containers that… exploded, or had some kind of a deflagration. They had pictures of one container that’s clearly breached, has holes, the lid is off, there are signs that there’s melting around, small amounts of fire, etc… So clearly something major happened. We still don’t know how many containers are involved, I think it’s very likely that its more than the one… the reason I think there’s probably more than is while this particular container has 16 or 17 curies of plutonium and americium [592 billion to 629 billion becquerels] in it, which is a much larger amount than what the average container is, there are containers including ones sitting right beside it that have more radioactivity. We don’t know how much came out, but from what we do know, it looks to me that it was more than what could have come out of a single container. >> Watch the fwull interview here

Read moreWIPP Expert: “Very likely” multiple nuclear waste drums exploded, risk of more occurring; It was clearly something major… signs of fire at container holding over 500 billion Bq of Plutonium and Americium — Nuclear Engineer: “This is a huge dirty bomb”

– Officials: Leakage seen on “many” nuclear waste drums in WIPP underground — We think the seals have degraded — Public “should be concerned” about another explosion — 1,000s of radioactive drums now seen as too risky to move (VIDEO) (ENENews, June 13, 2014):

AP, June 11, 2014 (emphasis added): Scientists investigating a mysterious radiation leak at the federal government’s underground nuclear waste dump have identified five other potentially explosive containers of waste from Los Alamos National Laboratory that are being stored at a site in West Texas, New Mexico Environment Secretary Ryan Flynn told a legislative panel Tuesday. […] Asked if the public should be worried, Flynn said: “Every member of the community should be concerned. … But I don’t think they should be worried. I don’t think people should be panicked about another drum exploding because we required (the U.S. Department of Energy) to plan for that and have a system in place to protect the public.” […] The Department of Energy has dozens of the world’s finest scientists trying to identifying what type of reaction could have caused the leak, Flynn said after the hearing. But he estimated it would be months before a definitive cause is determined. Until then, Flynn said, it is hard to speculate on what if any action can be taken to finish getting the last of thousands of barrels of decades-old waste off the Los Alamos campus in northern New Mexico. […] given the uncertainty of what caused the radiation leak, transporting the waste now is seen as too risky. Flynn said it also remains unclear how long the Waste Isolation Pilot Plant will be closed or how long it will take the [WIPP] plant to seal off the rooms where more than 350 other barrels of suspect waste from Los Alamos are currently stored.

Read moreOfficials: Leakage seen on “many” nuclear waste drums in WIPP underground — We think the seals have degraded — Public “should be concerned” about another explosion — 1,000s of radioactive drums now seen as too risky to move (VIDEO)

– Concern for “full plutonium flash” at WIPP nuclear site that affects other drums and triggers spreading disaster — Plutonium-239 is a main radioactive material in drum that exploded — Anonymous Employee: The warnings were ignored… “They put us in danger” (ENENews, June 8, 2014):

Sante Fe New Mexican, June 9, 2014: On the night of Feb. 14,  waste in an underground salt cavern in Southern New Mexico created so much heat the drum’s lid cracked. Radiation leaked out. Heavy bags of magnesium oxide stacked on top of the containers to prevent leaks shifted and disintegrated from the force of the reaction. […] The parent waste drum came from a waste stream including liquids such as hydrochloric and nitric acids, kerosene, methanol, silicone oil, nitrate salts, heavy metals and two main radioactive isotopes — plutonium-239 [the primary fissile isotope used for the production of nuclear weapons] and uranium-238. Ascarite, diatomaceous earth, vermiculite and kitty litter were added to soak up any liquids. […] “A lot of the drums we opened up had a lot of liquid,” said one former employee familiar with the process, who spoke on condition of anonymity because he was not authorized to speak with the media. […] EnergySolutions also switched from a clay-based kitty litter to Swheat, an organic kitty litter, for absorbing fluids. It is unclear why the contractor made the switch or whether LANL approved the switch, and lab officials wouldn’t comment. The former employee familiar with the repackaging process said EnergySolutions staff tried to warn the company’s administrators that the switch in kitty litter was a bad idea. The nitrate salts and the wheat-based kitty litter created a combustible mix, according to chemists. The warnings were ignored, the employee said. “They put us in danger, too,” he said. EnergySolutions did not respond to multiple requests for comment […]

Read moreConcern for ‘FULL PLUTONIUM FLASH’ at WIPP nuclear site that affects other drums and triggers spreading disaster – Plutonium-239 is a main radioactive material in drum that exploded – Anonymous Employee: The warnings were ignored … ‘They put us in danger’

– Top Science Journal: “Time bombs” at WIPP nuclear site? “High alert over risk of new explosions” in hundreds of plutonium-contaminated drums — AP: 4 years may be needed just to seal off area where drums stored — Experts go down to check if ground ‘still stable’ (VIDEO) (ENENews, May 31, 2014):

Nature, May 28, 2014: Nuclear-waste facility on high alert over risk of new explosions — US repository scrambles to seal off barrels […] Time bombs may be ticking at the United States’ only deep geological repository for nuclear waste. US authorities concluded last week that at least 368 drums of waste at the site could be susceptible to the chemical reaction suspected to have caused a drum to rupture there in February. That accident caused radioactive material to spill into the repository and leak into the environment above ground. […] To mitigate the threat of further exploding drums, the New Mexico Environment Department (NMED) in Santa Fe issued an order on 20 May giving the US Department of Energy […] until 30 May to come up with a plan to “expedite” the sealing of panel 6 and part of panel 7. [A reaction] blew the lid off of the container [an official cautioned,] “It is not yet known how, or if, the reaction created the rupture in the drum(s)” […] The DOE added that current assumptions and precautions about the hazards of operating the WIPP are being “evaluated and revised”.

For months state and federal government has been looking into an incident involving radioactive waste at a disposal site in New Mexico. Now, Investigators believe the culprit may have been the wrong kind of cat litter.

In February the Waste Isolation Pilot Plant (WIPP) near Carlsband, New Mexico was placed on lockdown prompted by the detection of radiation. The underground nuclear waste dump is the only such facility in the entire country.

An accident investigation report put out by the Department of Energy in April delved into both the immediate causes, as well as a lack of safety culture leading up to the accident.

KOAT, May 20, 2014: 500 WIPP barrels of questionable nuclear waste packed with kitty litter — New Mexico environment officials said more than 500 barrels of waste from Los Alamos National Laboratory were packed with the kitty litter suspected of causing a chemical reaction and radiation release […] In addition to 369 containers at the dump, environment officials said 57 more are still at Los Alamos and more than 100 are in storage in West Texas.

AP, May 20, 2014: New Mexico: 500 barrels of questionable nuke waste […] packed with the kitty litter suspected of causing a chemical reaction and radiation release at the nation’s underground nuclear waste dump. Environment Secretary Ryan Flynn Tuesday gave the U.S. Department of Energy and the contractor that runs [WIPP] until Friday to detail plans for permanently sealing the underground rooms where more than 300 barrels of the potentially dangerous containers of waste are stored.

Dept. of Energy, May 16, 2014: Visual evidence that shows a damaged waste container […] “In the new pictures, the [ Los Alamos National Laboratory] container has a cracked lid and shows evidence of heat damage. Workers will continue investigating […] if any other containers were involved or damaged,” said a DOE spokesperson.

LANL director Charles McMillan message to lab personnel, May 16, 2014: “similar waste drums here at the Lab and those sent to Waste Control Specialists in Texas are in a safe and controlled configuration […] we do not believe there is any imminent threat to the safety of our employees, the public, or the environment at this time. […] While many details remain unknown, additional investigative work is being planned to pinpoint the cause of the breached drum, the radiological release, and whether other containers were involved”

– Rebellion in the USA – Protesters Take Over Albuquerque City Council and Attempt to Arrest Police Chief (Liberty Blitzkrieg, May 13, 2014):

There is something very, very wrong with the Albuquerque, New Mexico police department, and the citizens have just about had enough. Before I get into the heart of this story, I need to provide you with a little background. The Albuquerque Police Department (APD) is well known for its outrageous and inappropriate use of violence. So much so that it has been under investigation by the Department of Justice, which wrote a letter to the Mayor of Albuquerque on April 10, 2014 condemning the police force. Here’s an excerpt from the letter: