Amateur video showing the aftermath of one of the explosions

At least 36 people have been killed after two female suicide bombers blew themselves up on Moscow Metro trains in the morning rush hour, officials say.

Twenty-four died in the first blast at 0756 (0356 GMT) as a train stood at the central Lubyanka station, beneath the offices of the FSB intelligence agency.

About 40 minutes later, a second explosion ripped through a train at Park Kultury, leaving another 12 dead.

The FSB said it was likely a group from the North Caucasus was responsible.

The BBC’s Richard Galpin in Moscow says no group has yet said it carried out the attacks, but past suicide bombings in the capital have been carried out by or blamed on Islamist rebels fighting for independence in Chechnya.

In February, Chechen rebel leader Doku Umarov said “the zone of military operations will be extended to the territory of Russia… the war is coming to their cities”.

At an emergency meeting with senior officials, President Dmitry Medvedev vowed to uphold the “policy of suppressing terror and the fight against terrorism”.

“We will continue operations against terrorists without compromises and to the end,” he said. 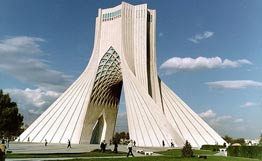 A top Russian official is arriving in Tehran on Sunday to discuss security, topical international and regional issues, the Supreme National Security Council of Iran said on Sunday.

Sobolev will be paying a return visit to Tehran following a visit by Jalili to Moscow in December 2007, Iran’s Supreme National Security Council said.