A massive cloud smelling like ‘hell’ sparked a widespread panic in Moscow. Residents were afraid of a toxic gas after warnings to stay indoors.

The source of the rotten eggs smell turned out to be a leak from a sulfur dioxide processing facility at an oil refinery in Moscow, the Emergencies Ministry confirmed.

The city’s ecology watchdog and the Emergencies Ministry said that the level of hydrogen sulfide was over the permitted level for a short period of time, while the levels of sulfur dioxide remained within the norm. The two gases are byproducts of oil processing.

The smell created a wave of panic on local social media. 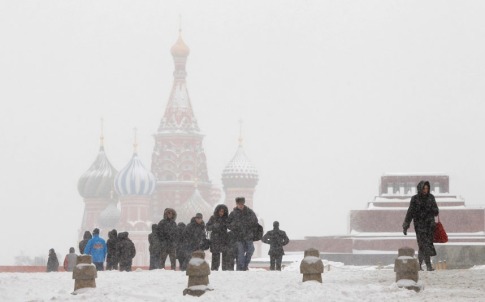 This weather is what we would normally expect on the tenth of November.

Russians could have to deal with a series of snowfalls, reported newspaper Gazeta.

“On October 17, cold air will flow into the capital region with north-east winds, reducing the thermometer: up to four degrees in the capital and minus four in the Moscow region. North and north-east of the region might see some wet snow”, said news agency Moskva.

After the weekend, temperatures will continue to drop.

Read moreEdward Snowden Is No Longer In Moscow

– Desperately Seeking Snowden: Where In The Russian Airport Is The Fugitive Whistleblower? (ZeroHedge, July 6, 2013)

MOSCOW  – The Moscow authorities have refused to grant permission for an opposition rally against “political repression” that was to be held later this week on that grounds that there is no such thing in Russia.

A fire broke out on Sunday at a Moscow nuclear research center that houses a non-operational 60-year-old atomic reactor, emergency officials reported as Russia’s nuclear agency Rosatom said the blaze had not been accompanied by any open flames and posed no threat of a radiation leak. Charles Digges, 05/02-2012

Russian Prime Minister Vladimir Putin has played down his party’s losses at Sunday’s parliamentary election as inevitable for a party in power.

Thousands of police and interior troops are on alert in Moscow, after one of the biggest opposition rallies in the city centre for years.