FEARS of the unknown long-term effects from the global financial crisis have sparked a new gold rush.

With retail and wholesale clients around the world stocking up on the precious metal, the Perth Mint has been forced to suspend orders.

As the World Gold Council reported that the dollar demand for gold reached a quarterly record of $US32 billion ($50.73 billion) in the third quarter, industry insiders said the race to secure physical gold had reached an intensity that had never been witnessed before.

He said Europe was leading the demand, with Russia, Ukraine, Middle East and US all buying — making up 80 per cent of its sales. One European client purchased 30,000 ounces for $33 million.

“We have never seen this before and are working right at capacity. And we are seeing it from clients in the shop buying one ounce, right up to 30,000 ounces from overseas clients,” Mr Currie said.

Investors have rushed to buy gold bars and bought exchange traded funds, worth US$2.8 billion – the biggest inflow on record.

The onset of a global recession and falling stock markets have triggered a stampede for gold – the traditional safe haven during times of uncertainty.

According to the World Gold Council, exchange traded funds are the main beneficiary of the flight to safety. ETFs experienced their strongest quarterly inflow during the third quarter since SPDR®Gold Shares – the first gold ETFs – were launched in November 2004.

But the Council added that bullion dealers around the world reported an unprecedented surge in demand for coins and small bars. It said that there had been reports outright shortages of gold and high premiums over the gold spot price. The US Mint temporarily suspended sales of American Buffalo gold 1 ounce coins after its stocks were depleted, while UK, German and Austrian coin dealers have also reported an enormous increase in demand during the third quarter, it added.

The average gold price edged down slightly between June and September, to $870.88/oz, from $896.11/oz in the previous three months. Gold traded as high as $986/oz on July 15, the day after the US Treasury and Federal Reserve Bank announced plans for a joint bail-out of mortgage giants Fannie Mae and Freddie Mac, but fell sharply later in the quarter to a low of $740.75/oz on September 11. This proved short lived, however. By the end of the quarter, the gold price had rebounded to $884.50/oz.

The financial crisis is prompting people to look for safer forms of investment than stocks and shares.

The interest in gold coins is so great that many of the world’s major mints are struggling to keep up with demand, including the Austrian Mint, which produces the Vienna Philharmonic – one of the best-selling bullion coins worldwide.

Sales of Vienna Philharmonic gold coins have gone up by more than 230% since last year.

Kerry Tattersall, the director of marketing at the mint, says production has gone into overdrive.

“We are running at present something like three shifts on all of the machines, on the presses, producing both gold and the silver bullion coins.

How gold coins are made

“We’ve actually got delays in delivering orders in silver. With gold, we are just about keeping pace, but it is a bit of a struggle.”

In September alone, the mint sold 100,000 ounces in gold coins – in normal times it would take three to four months to sell that much.

Central banks have all but stopped lending gold to commercial and investment banks and other participants in the precious metals market, in a move that on Tuesday sent the cost of borrowing bullion for one-month to more than twenty times its usual level.

The one-month gold lease rate rocketed to 2.649 per cent, its highest level since May 2001 and significantly above its five-year average of 0.12 per cent, according to data from the London Bullion Market Association.

Gold lease rates for two, three and six months and for a year also jumped to levels not seen in the last seven years.

NEW YORK, Oct 7 (Reuters) – Unprecedented demand for precious metals and volatile markets forced the U.S. Mint to cease production for the half-ounce and quarter-ounce popular American Eagle gold coins for the rest of this year and to supply other bullion coins on an allocation basis.

“Due to the extreme fluctuating market conditions for 2008, as well as current market conditions, gold and silver demand is unprecedented and the demand for platinum is unusually high,” the U.S. Mint said in a Monday memorandum to its authorized coin dealers.

“The U.S. Mint has worked diligently to attempt to meet demand, however, blank supplies are very limited and it is necessary for the U.S. Mint to focus remaining bullion production primarily on American Eagle Gold One Ounce and Silver One Ounce Coins,” the Mint said.

LONDON – Gold market manipulation conspiracy theorists should be having a field day.  The past few weeks have seen solid evidence that physical gold demand from individuals is soaring. We have seen the U.S. Mint having to suspend one ounce Gold Eagle coin sales because of what it terms ‘unprecedented demand’, Indian gold sales have picked up enormously in the past few weeks leading to purchasers having to wait several days for deliveries as the traditional sellers are short of gold, while yesterday we hear that Abu Dhabi, a major trading centre for precious metals, has seen gold sales rise by 300 percent in volume and 250 percent in value in August compared with a year ago.

According to a Reuters report quoting Abu Dhabi Gold and Jewellery Group Chairman Tushar Patni “It was the best month the market has seen in almost 30 years and it compensated for any drops we have seen earlier this year.  We had never expected that if gold fell below $800 an ounce we would see a 300 percent increase in volume and 250 percent in value, especially as many buyers are abroad on holiday.” 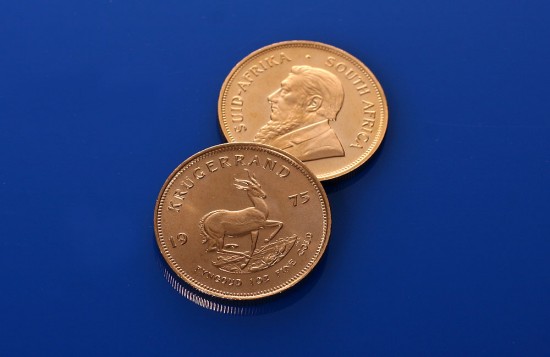 NEW YORK (Reuters) – The U.S. Mint said it must allocate the American Eagle bullion coins among dealers to cope with overwhelming demand as it resumed taking orders for the popular coins on Monday.

“The unprecedented demand for American Eagle gold one-ounce bullion coins necessitates our allocating these coins among the authorized purchasers on a weekly basis until we are able to meet demand,” the U.S. Mint told its authorized American Eagle dealers in a memo dated August 22.

Last week, soaring demand forced the U.S. Mint to suspend temporarily sales of the American Eagles, creating a shortage in the one-ounce version of the coins, which are also available in other weights and denominations. 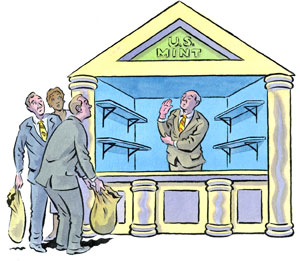 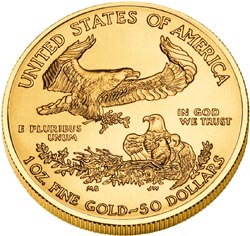