Helen should really educate herself about global warming and about the elitists who really run our governments, MSM and the corporations.

Other than that THANK YOU so much Dr. Helen Caldicott!!!

Dr. Caldicott referred to this as a process of “cover-up and psychic numbing.”  Looks like it may be working.

Dr. Caldicott talks about the dangers and hidden costs of nuclear power then tells the awful truth in minute detail about the actual scale of the Fukushima disaster and compares it to the nuclear disasters of Chernobyl and Three Mile Island.

Recent studies estimated that a million people have died so far from Chernobyl.

– Los Angeles Rain Radiation Over Five Times Normal (Video): ‘This Might Be The Hottest Rain That We’ve Ever Had In Los Angeles’

“Countless people… will hate the new world order… and will die protesting against it.”
– H.G. Wells, The New World Order (1939)

“As we are addressing these challenges, these problems raised by these protest movements, we will gradually find our way towards a new world order.”
– Mikhail Gorbachev 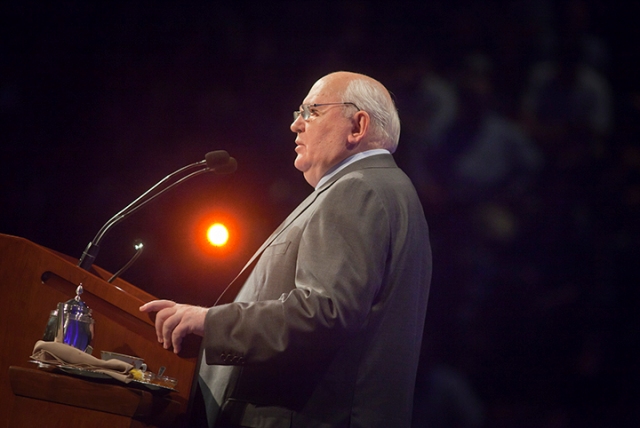 “We are reaping the consequences of a strategy that is not conducive to cooperation and partnership, to living in a new global situation,” said Mikhail Gorbachev, former President of the Soviet Union, to a crowd of 3,600 on Oct. 19 in the Allan P. Kirby Field House and many others via a live streaming broadcast in 13 locations from coast to coast, including northern Mexico. “People are asking ‘why do our leaders want to decide everything at the expense of the people?’”

Gorbachev was referring to the series of uprisings around the world including the Occupy Wall Street demonstrations here in the United States. “The world needs goals that will bring people together,” he said. “Some people in the United States were pushing the idea of creating a global American empire, and that was a mistake from the start. Other people in America are now giving thought to the future of their country. The big banks, the big corporations, are still paying the same big bonuses to their bosses. Was there ever a crisis for them? . . . I believe America needs its own perestroika.”

Mikhail Gorbachev:
“Yet we see the United States approving a military budget and the defence secretary pledging to strengthen conventional forces because of the possibility of a war with China or Russia.

Mikhail Gorbachev has accused the United States of mounting an imperialist conspiracy against Russia that could push the world into a new Cold War. 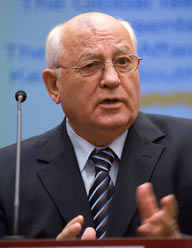 With Dmitry Medvedev due to be inaugurated today as Russian president, the Soviet Union’s last leader said that the White House’s claims of peaceful intentions towards its former superpower rival could no longer be trusted.

Delivering one of his most scathing attacks on the US, Mr Gorbachev told The Daily Telegraph that a US military build-up was under way to contain a resurgent Russia.

From Nato’s expansion plans in the former Soviet Union to Washington’s proposals for a bigger defence budget and a missile shield in central Europe, the US was deliberately quashing hopes for permanent peace with Russia, Mr Gorbachev said.

“We had 10 years after the Cold War to build a new world order and yet we squandered them,” he said.

“Every US president has to have a war.”

The 1990 Nobel Peace Prize winner’s denunciation of the US mirrors the most belligerently anti-Western speeches of Vladimir Putin – who is said to consult Mr Gorbachev on foreign policy matters.

Mr Putin may be switching jobs to become prime minister, but many expect him to remain the most powerful figure in Russian politics.