A crude pipe bomb, reportedly adorned with a Swastika was detonated outside a house of Syrian migrants on the night of March the 4th. There were no injuries but police have only just made the apparent attack public and are investigating a potential “xenophobic” motive.

Two immigrant families caused traffic chaos in central Norrköping last week after they refused to get off their government transfer bus at their new home. The group had been given free use of an apartment in the historic, fashionable Nygatan district in the city centre but were apparently still dissatisfied.

A police spokesman said “We are still at the address because it is a bit messy there right now. The families are not satisfied with the standard of the apartment and therefore refused first to get off the bus”, reports Norrköpings Tidningar.

Eight asylum seekers aged between 18 and 21 from Syria and Tajikistan have been arrested after three girls aged between 11 and 14 were “massively molested” at a swimming pool. The girls reported being touched on the buttocks and chests.

The girls reported their assault to a pool employee immediately after they escaped the gang on Saturday afternoon, and the pool called police officers to the scene, according to a force report. German newspaper Welt reports there was “heated discussion” on the Facebook page of the Oberhausen police after it transpired the suspects were released from custody. 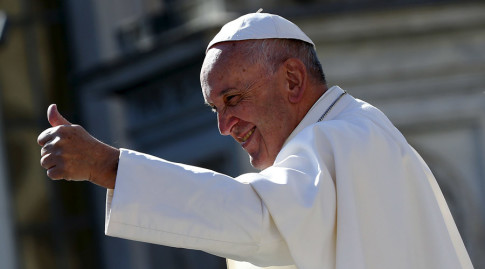 Europe is facing an ‘Arab invasion’, Pope Francis mused while addressing a French Christian group, adding that the trend is actually a positive one.

“We can speak today of Arab invasion. It is a social fact,” the pontiff said, according to extracts from his address earlier this week which were published by the Vatican newspaper L’Osservatore Romano on Thursday.

A 15 year old Afghani migrant was sexually abused by several other migrant teens after they had smoked an unknown quantity of marijuana. The victim was threatened at knife-point and abused by four attackers in a sports field with another migrant filming the entire ordeal on his smartphone. Police have so far arrested 2 of the attackers and say the other three are being sought in connection with the crime, reports Kleine Zeitung.

– Government Funded Website Teaches Migrants How To Have Sex… In 13 Different Languages:

An explicitly illustrated new website from the German Federal Centre for Health Education (BZgA) targeting migrants gives life lessons in sex, including different positions, prostitution, and how to engage in causal sex.

Launched in late February as a means to aid integration, the website is gathering significant attention abroad for its graphic cartoon depictions of sexual acts. The pictures, which often show dark-skinned men having sex with white women have been referred to as an illustration of Germany’s “welcoming culture” towards migrants by Swiss newspaper Blick, while Canada’s Ezra Levant called them conveniently “colour coded”.

Some illustrations of sex from the site / zanzu.de

Available in 13 languages including Arabic and Turkish, Zanzu.de is funded by the BZgA as well as the Federal Ministry for Health. Many of the issues dealt with by the site are explained to German children while they are at school in sex education classes, but for those coming from “Arab and African” countries this is not the case, reports the German Express.

“They say they are prepared to die for this cause. It won’t be long before they do.”

Calais, France — Desperate volunteers in a Calais refugee camp have issued an urgent plea to the U.N. to recognise the plight of a group of Iranians who sewed their mouths shut a week ago. The extreme protest — joined in solidarity by a British volunteer — was initiated to draw attention to the atrocities being carried out by the French government.

The latest shocking tale to unfold from the Calais camp — known as The Jungle — began on March 1st to raise awareness of the human rights violations taking place. Homeless, jobless, and now hopeless, eight Iranian men aged between 17 and 46 sewed each other’s lips shut in the extreme form of protest against the forced evictions of the southern side of the squalid camp. Their bold move has been supported by British volunteer, Tom Radcliffe, who has joined in solidarity.