Authorities in the Austrian town of Mistelbach issued a temporary pool ban for refugees following a sexual assault by a “dark-skinned’ man on a 13-year-old girl.

“This news was a shock,” said the town’s mayor, Alfred Pohl, as quoted by the Heute media outlet.

According to Austrian newspaper Kronen Zeitung, the attack happened on Wednesday afternoon.

The girl was first followed by a young man into the women’s changing room. Once there, he forced her to perform oral sex. The girl however fiercely resisted and started shouting, forcing the attacker to flee.

– French Man robbed and Beaten by arab Immigrant in bus

Three Syrian refugees reportedly raped a little girl at knifepoint in Idaho before urinating on her body, an incident that prompted furious residents to accuse Twin Falls city council members of covering up the assault.

The sexual assault allegedly took place on June 2, but has received virtually no media attention aside from one vague KMVT report.

However, residents have been circulating what really happened on social media, with the Creeping Sharia blog reporting that the victim was a young girl who was born premature and is “less developed for her age”.

The perpetrators were three Syrian youths aged 8, 10 and 13, with the oldest boy directing the assault.

– Tory MP forced to agree with Corbyn that there can be NO LIMIT on immigration:

A CONSERVATIVE MP was left floundering as yet another member of the Remain camp admitted there was no limit to immigration if the UK remains in the European Union.

– Turkey Resorts To Blackmail, Warns Europe It Will Unleash Refugees If No Visa-Free Travel:

Turkey would have to suspend its agreement with the European Union to stem the flow of migrants into the bloc if there is no deal to grant visa-free travel to Turks, Foreign Minister Mevlut Cavusoglu told state broadcaster TRT Haber on Tuesday.

– Migrants Responsible For 69,000 Crimes In Germany In The First Quarter: Police Report:

In the latest development that is certain to raise the heat under Merkel’s cabinet and may lead to even higher support for Germany’s anti-immigrant AfD party, Reuters reports that migrants in Germany committed or tried to commit some 69,000 crimes in the first quarter of 2016, according to a police report “that could raise unease, especially among anti-immigrant groups, about Chancellor Angela Merkel’s liberal migrant policy.”

Read moreMigrants Responsible For 69,000 Crimes In Germany In The First Quarter: Police Report

A document leaked from a public hospital in Sassari, Sardinia and brought to the attention of the public by Sardinian politician Mauro Pili, shows hospital management urging the premature discharge of patients in order to make room for 390 migrants (including a two-day-old newborn) expected to disembark that evening at nearby Porto Torres.

The letter to staff at the hospital demonstrates not only a complete lack of emergency preparedness but also shows that the hospital management appear to have a rather cavalier attitude to the health and welfare of the indigenous population. 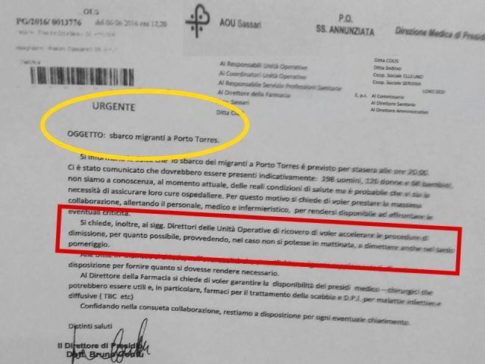 The section highlighted in red roughly translates as “Directors of hospital operational units are asked to accelerate the discharge procedure, as far as possible, by discharging patients in the late afternoon if you could not do so in the morning.

In his Facebook post, Mr. Pili rightly draws attention to the absurdity of the situation and decried the ruthless nature of the commnunication to staff and its potential impact on patients living in a “region that is in disarray”.

Paris Mayor Anne Hidalgo has announced plans to build a “humanitarian camp” next to one of the busiest train stations in the city, so that thousands of illegal migrants bound for Britain can “live with dignity.”

Hidalgo, who has often sparred with French President François Hollande for his refusal to accept more migrants, says her plan to help illegal migrants from Africa, Asia and the Middle East is a “duty of humanism.”

Critics counter that Hidalgo’s plan is a cynical ploy aimed at positioning herself to the left of the current president, as part of a political strategy to wrest leadership of the Socialist Party from Hollande, whose approval ratings are at record lows.

– Germany: Migrant Threatens Cop, Cop Does Nothing to Avoid Being “Sued for Racism”:

Video shows a German cop powerless to respond to threats from an African migrant due to fear he may be “sued for racism.”

The footage aired recently on RTL Television in Germany as part of a longer documentary.

The migrant was angry that a TV reporter filmed him, he responded by getting in the reporter’s face and threatening him, shouting repeatedly, “Why you film me?”

When the police officer intervenes to apologize and say “sorry,” he becomes the target of the migrant’s rage.

Read moreGermany: Migrant Threatens Cop, Cop Does Nothing to Avoid Being “Sued for Racism” (Video)