Residents of South Florida woke up Sunday morning to Hurricane Irma making landfall at 9:10 a.m. in the Florida Keys as a monster Category 4 storm with maximum sustained winds of 130 mph.

The monster storm made a second landfall later at 3:35 p.m. near Marco Island as it continued traveling north along Florida’s Gulf Coast. The National Hurricane Center (NHC) expects Irma to continue overnight into Monday before finally losing hurricane strength status.

#Irma is expected to bring heavy rainfall and flooding to much of Florida and portions of the southeast U.S. over the next few days @NWSWPC pic.twitter.com/veYDRoJNlg

By Sunday afternoon Irma had been downgraded to a Category 2 hurricane, but the NHC was still warning of an “imminent danger of life-threatening storm surge flooding along much of the Florida west coast.” More than 6.3 million people evacuated from their homes after the Florida governor ordered those in Irma’s projected path to seek safe shelter away from the storm. Curfews for 6:00 p.m. have been declared by local officials in the cities of St. Petersburg and Tampa Bay.

As Florida residents continue to brace for life-threatening storm surges of up to 15 feet, here are 11 surreal scenes from Miami that reminded us of a real-life disaster movie:

As of noon ET, Miami’s financial center appears to now be flooding as ocean water enters city streets as part of the storm’s surge. Earlier in the day, a crane which was thought to be able to withstand the direct hit of a Category 4 hurricane, collapsed in downtown Miami.

“I counted 38 homeless in roughly one click down 1st Street Miami.

In UK they are MICROWAVED to make them feel uncomfortable & move on.

The irony is MICROWAVING was used by US Military to kill the anti Cruise Missile Campaigners at RAF Greenham Common 30 years ago.”

“In laboratory animals, exposure for just 3 days during pregnancy when the brain is growing quickly reduced brain size 15 percent.“

According to shop owners and managers in the town of Wynwood, Flordia – also known as the “Zika Zone” – the area has been noticeably empty of the usual crowds that form to see the local murals and shop at local businesses.

The slow down in pedestrian traffic coincides with the intensified effort by the state of Florida to combat the mosquitos which carry the Zika virus by blanketing the town of Wynwood with insecticide. 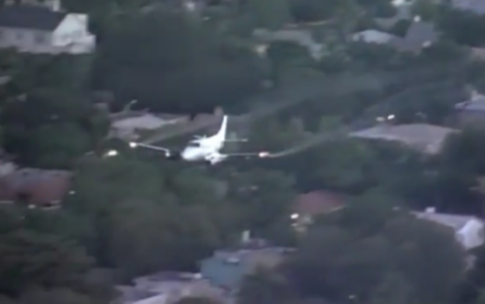 “It’s actually been pretty much a ghost town,” an eclectic plant shop owner in the area, who was only able to make one sale on an otherwise busy Saturday, told CBS Miami.

MIAMI (CBSMiami) – On December 10, more than two dozen police officers from across Miami Dade County converged on a blue Volvo that had crashed in the backyard of a townhouse on 65th Street just off 27th Avenue.

As the car was wedged helplessly between a light pole and a tree, nearly a minute passed before officers opened up – firing approximately 50 bullets at the car and the two unarmed men inside the vehicle.

Bullets were sprayed everywhere. They hit the Volvo, other cars in the lot, fence posts and neighboring businesses. They blasted holes in a townhouse where a 12-year-old dove to the ground for cover and a four month old slept in his crib.

Durham said the Marine Corps plans to show off its new battalions in Miami later this month at a conference put on by the Southern Command that is expected to be attended by government officials from Central American countries, such as Guatemala, Honduras, El Salvador and Belize.

The Corps activated three such battalions last month. Each is made up of roughly 500 military police officers and dozens of dogs. The Marine Corps has had police battalions off and on since World War II but they were primarily focused on providing security, such as accompanying fuel convoys or guarding generals on visits to dangerous areas, said Maj. Jan Durham, commander of the 1st Law Enforcement Battalion at Camp Pendleton.

A West Palm Beach couple who filmed Monday morning’s deadly officer-involved shooting on South Beach has accused officers of intimidation, destroying evidence and twisting the facts in the chaos surrounding the Memorial Day shootings – a charge that police officials say they know nothing about.

Meanwhile, a South Carolina man charged with DUI in a second officer-involved shooting that morning says he is innocent.

On Thursday, The Miami Herald spoke to the couple that saw the end of the 4 a.m. police chase on Collins Avenue, then watched and filmed from just a few feet away as a dozen officers fired their guns repeatedly into Raymond Herisse’s blue Hyundai. They say the only reason they were able to show the video to a reporter is because they hid a memory card after police allegedly pointed guns at their heads, threw them to the ground and smashed the cell phone that took the video.

The three-minute video captured on Narces Benoit’s HTC EVO phone begins as officers crowd around the east side of Herisse’s car with guns drawn. Roughly 15 seconds into the video, officers open fire.

Benoit filmed the incident from the sidewalk on the northeast corner of 13th Street and Collins Avenue, close enough to see some officers’ faces and individual muzzle flashes.

Shortly after the gunfire ends, an officer points at Benoit and police can be heard yelling for him to turn off the camera. The voices are muffled at times. The 35-year-old car stereo technician drops his hand with the camera and hurries back to his Ford Expedition parked further east on 13th Street.

The video shows Benoit get into the car, where his girlfriend, Ericka Davis, sat in the driver’s seat. He raises his camera and an officer is seen appearing on the driver’s side with his gun drawn, pointed at them.

The video ends as more officers are heard yelling expletives, telling the couple to turn the video off and get out of the car.

“They put guns to our heads and threw us on the ground,” Davis said.

Benoit said a Miami Beach officer grabbed his cell phone, said “You want to be [expletive] Paparazzi?” and stomped on his phone before placing him in handcuffs and shoving the crunched phone in Benoit’s back pocket. He said the couple joined other witnesses already in cuffs and being watched by officers, who were on the lookout for two passengers who, police believe at the time, had bailed out of Herisse’s car. It is still not known whether any passengers were in the car.

Four bystanders were shot in the gunfire and three officers suffered minor injuries.

Benoit said the officers eventually uncuffed him after gunshots rang out elsewhere and he discreetly removed the SIM card and placed it in his mouth.

Officers again took his phone, demanding his video. He said they took him to a nearby mobile command center, snapped a picture of him, then took him to police headquarters and conducted a recorded interview while he kept the SIM card in his mouth. He insisted his phone was broken.

Miami police could soon be the first in the United States to use cutting-edge, spy-in-the-sky technology to beef up their fight against crime.

A small pilotless drone manufactured by Honeywell International (HON.N), capable of hovering and “staring” using electro-optic or infrared sensors, is expected to make its debut soon in the skies over the Florida Everglades.

If use of the drone wins Federal Aviation Administration approval after tests, the Miami-Dade Police Department will start flying the 14-pound (6.3 kg) drone over urban areas with an eye toward full-fledged employment in crime fighting.