Blackwater, then Xe and now Academi.

Greystone is a subsidiary of Blackwater.

Dnepropetrovsk, March 25. /ITAR-TASS/. An overseas private military company will engages in the suppressing of protest moods of the mostly Russian-speaking population in the East of Ukraine, a source at the Security Service of Ukraine said Monday

“The case in hand is Greystone Ltd. company,” he said.

What Putin Has to Say to Americans About Syria

MOSCOW — RECENT events surrounding Syria have prompted me to speak directly to the American people and their political leaders. It is important to do so at a time of insufficient communication between our societies.

Relations between us have passed through different stages. We stood against each other during the cold war. But we were also allies once, and defeated the Nazis together. The universal international organization — the United Nations — was then established to prevent such devastation from ever happening again.

Here’s how serious the U.S. is about its African war on terror. The Pentagon is preparing to spend millions to create a privatized flying taxi service to fly its commandos everywhere from Libya to Congo.

That’s according to details in a recent solicitation notice for a Defense Department contract worth up to $50 million, expected to be handed over to a private contracting firm in August. Among the two main tasks contractors will be expected to carry out: medical evacuations during “high risk activities” — capable of being launched within a three-hour notice — as well as transporting equipment and commandos from Joint Special Operations Task Force-Trans Sahara (or JSOTF-TS) within the borders of potentially 20 African nations. When you want to keep a U.S. military footprint small, you have to contract out a lot of logistics services.

U.S. Special Operations Forces have a brand new home in Afghanistan. It’s owned and operated by the security company formerly known as Blackwater, thanks to a no-bid deal worth $22 million.

You might think that Blackwater, now called Academi, was banished into some bureaucratic exile after its operatives in Afghanistan stole guns from U.S. weapons depots and killed Afghan civilians. Wrong. Academi’s private 10-acre compound outside Kabul, called Camp Integrity, is the new headquarters for perhaps the most important special operations unit in Afghanistan.

The US security firm formerly known as Blackwater, which was barred from Iraq over a deadly 2007 shooting, has renamed itself a second time.

“We have had a year of extraordinary changes that have resulted in a new, better company,” ACADEMI president and chief executive Ted Wright said in a statement.

“I know that everyone at ACADEMI shares in this commitment to promote the highest standards of ethical conduct, compliance and integrity in all of our activities.

If you thought it was bad that Washington is paying a shady French mercenary to do its dirty work in Somalia, you ain’t seen nothing yet. Just wait to you see our latest ally: an admirer of Osama bin Laden with a gory past.

Richard Rouget, a notorious gun-for-hire who uses American funds to train African Union soldiers fighting in the ruins of Mogadishu, has been mentioned in connection with at least one murder. But U.S.-backed Somali government general Yusuf Mohamed Siad, a.k.a. “Indha Adde,” a.k.a, “The Butcher,” once ruled an entire region of Somalia with a bloody fist.

The U.S.-led international intervention in civil war-torn Somalia is unlike any of America’s other wars. Where the conflicts in Iraq and Afghanistan are fought by tens of thousands of U.S. troops, in Somalia Washington pays others to do most of the fighting. These proxies include merc firms, regional bodies such as the A.U. and local allies including the nascent federal government.

That means less direct danger to American lives. But in another sense it means more danger. The more that the U.S. relies on proxy armies to do its fighting, the more it risks those proxies usurping American support and directing it towards their own dubious ends. That’s the subject of ace reporter Jeremy Scahill’s latest piece in The Nation and also of my own feature for The Diplomat.

“As one of the main warlords who divided and destroyed Somalia during the civil war that raged through the 1990s, he brutally took control of the Lower Shabelle region,” Scahill wrote about Siad. “There are allegations that he ran drug and weapons trafficking operations from the Merca port.” Siad also readily admits providing protection to al-Qaida operatives and speaks fondly of the late Osama bin Laden.

Mind you, this is one of the top generals in the army of one of our closest allies in Somalia. 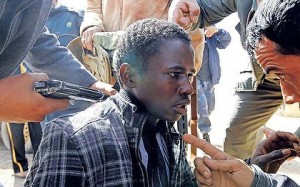 The mainstream media is already engaging in widespread damage control in an attempt to mitigate the fallout of the reality of the situation in Libya and the withering NATO-sponsored narrative of post-Gaddafi Libya.

To Syria now, where the UN is pulling out its staff amid growing concern about the violent crackdown by government forces against demonstrators. It comes as activists say over 30 people have been killed since troops seized control of the northern port city of Latakia.

But, director of the Center for Research on Globalization – Michel Chossudovsky – says the hype around the Syrian crisis is being orchestrated from abroad.

Blackwater’s rebranding continues at a torrid pace. Danger Room has learned the latest Washington greybeard hired to spruce up the image of the world’s most infamous private security firm is Jack Quinn, a top Washington lobbyist and former White House counsel to President Bill Clinton.

Now renamed Xe and owned by an investor consortium called USTC Holdings, the company is bringing Quinn — pictured left, with Rep. Joe Crowley — onto its board as an “independent director.” He’ll focus on “governance and oversight,” keeping the company out of trouble, especially with the government. USTC Holdings’ Jason DeYonker says that Quinn’s reputation for “commitment to the highest ethical standards of conduct in both the public and private sectors” makes him a great fit.

To be cynical about it, a man who gave legal advice to Clinton knows a whole lot about crisis management. Which is important, since Xe intends to keep providing security to U.S. diplomats in dangerous places – activities that, under its old leadership, led its guards into a shooting debacle that killed 17 Iraqi civilians in 2007.

Quinn is one of a string of board members and executives Xe brought on to draw a bright line between the old Blackwater and the new. All of them are powerful people, like ex-Attorney General John Ashcroft. Quinn’s lobbying clients include AT&T, old-folks association AARP and Visa.