A 15-year-old Connecticut girl remains held by Boston Children’s Hospital, a victim of the hospital’s “kidnap and ransom” operation, traditionally called “K&R.” K&R is not usually seen in hospitals, and that’s what makes this story so bizarre and disturbing.

Boston Children’s Hospital kidnapped the teen girl from her Connecticut family nearly 10 months ago under the excuse of a contrived medical diagnosis. Through legal maneuvering, the hospital managed to gain legal custody of the girl, and the “ransom demand” is the demand that the parents stop trying to remove the girl from the hospital so that Boston Children’s can generate maximum revenue from so-called “treatments” which have so far accomplished nothing.

“It is kidnapping,” said the girl’s father, Lou Pelletier. “It’s beyond any wildest nightmare that you could think of.”

Arnie Gundersen, Fairewinds Chief Engineer: We’re seeing scientist after scientist here at Fairewinds writing to us saying that they’ve got good science and they’re being ostracized in Japan and being forbidden for publishing scientific reports that show radiation health damage to Japanese people. So basically the government is sitting on the scientific community and preventing goods science from being done. Same as the doctors, the doctors have contacted us as well. They say they’ve been told not to tell their patients that their illness is radiation induced. So these guys have an oath as a doctor to be honest with their patients, and yet they’re basically ignoring their own oath and helping perpetuate a cover-up in the Japanese government. […]

Host: From where I sit, what you just described is madness essentially.

Gundersen: From where I sit it’s madness too. That’s the problem in Japan right now, is that nobody is willing to admit that the path they have chosen to take for the last two and a half years is crazy. 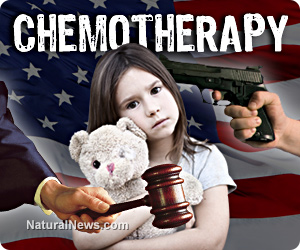 This is, essentially, chemotherapy at gunpoint or what I call “predatory medicine.” If the parents refuse the court order, they will be arrested at gunpoint and charged with various crimes. The Akron Children’s Hospital, which stands to profit from this decision, is the new medical mafia, poisoning children with mandatory “life sentences” handed down by a corrupt, medically ignorant justice system.

Proteus Digital Health which recently changed their name from Proteus Biomedical has been given approval by the U.S. Food and Drug Administration to dose you with a micro-chipped pill. The company has been working with the FDA since 2008, at its own admission, to ‘determine the regulatory pathway for this new technology.’ Just weeks ago, this ‘technology’ application was processed ‘in accordance with the de novo provisions of the Federal Food, Drug and Cosmetic Act for low-risk devices that have no predicate on the market.’

While these initial observances of the micro-chip scanning pill seem fairly benign, there are people with concerns that these micro-chips will be used for more nefarious reasons.

While swallowing a micro-chip-filled pill which is approximately the size of a grain of rice may have no physical risk (though this is obviously debatable since the body usually tries to purge anything that doesn’t belong in it), it certainly brings up important ethical questions about the right to privacy and the valid concern that this precedent setting allowance by the FDA will allow other micro-chipped ‘medicines’ to be used to control the masses.

– Horror as patient wakes up in NY hospital with doctors trying to harvest her organs for transplant profits (Natural News, July 11, 2013):

I’ve warned Natural News readers about this several times over the last decade: Do NOT become an organ donor! Although you may wish to help others out of the goodness of your (literal) heart, the sinister truth is that doctors routinely harvest organs from LIVING patients right here in the USA.

And here’s yet more proof. This true story will astound you.

Waking up on the organ harvesting table…

A woman named Colleen Burns recently opened her eyes to find herself on an operating table in a hospital in Syracuse, NY. Looking around, she noticed that she was the subject of the operation. It turns out doctors were about to harvest her organs and send them to other waiting surgeons who would transplant them into other patients.

This isn’t fiction. It was covered by ABC News and several other news sources. It really happened.

And how did it happen? Doctors falsely pronounced her dead by fraudulently claiming she had suffered “cardiopulmonary arrest” and “irreversible brain damage.” This gave them the medical justification to start slicing away even while the woman’s heart was still beating.

This is a big “holy crap I didn’t know that” fact about organ donations: Doctors don’t wait until you’re really dead. At least not by any normal definition of “dead.”