Despite a new poll published Monday suggesting that 76% of Americans expect that a non-GMO dairy label would mean the cows were fed non-GMO feed, a “Trojan horse” paragraph in Bill H.R. 1599, also known as the DARK Act, is set to deliver the exact opposite to consumers, as well as a massive boost to the Biotech industry. Warren Taylor, Co-Owner of Snowville Creamery in Ohio, stated Monday; “The DARK Act affirmed the U.S. government’s refusal to require GMO labeling despite almost universal public desire for GMO labeling. It makes labeling a federal function, so individual states cannot pass unique labeling laws. This is a common sense requirement in today’s marketplace. The most egregious part of the Act went almost completely unnoticed. A single Trojan horse paragraph at the end of the non-GMO product labeling section allows meat, milk, and eggs from animals fed GMO feed to be labeled as non-GMO. In this way the DARK Act went from not telling to actively intentionally misleading the public about the GMO content of meat, milk, and eggs.”

Meat producers are angry, vegetarians are feeling vindicated, and cancer experts are welcoming the most comprehensive pronouncement yet on the relation between our modern meat-eating lifestyles and cancer. 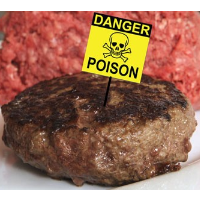 Eating a hamburger in the U.S. comes with the risk that it might contain fecal matter, based on research performed for Consumer Reports.

“There’s no way to tell by looking at a package of meat or smelling it whether it has harmful bacteria or not,” said Urvashi Rangan, executive director of the Center for Food Safety and Sustainability at Consumer Reports. “You have to be on guard every time.”

On the surface, Canada’s 1.2% inflation is negligible, and barely enough to keep up with the pace of overall growth as mandated by a few central bank academics. It is below the surface, however, that one finds the scary truth. Because when stripping away the sliding energy prices (which at the recent pace of short covering among oil speculators are about to surge) some scary numbers emerge, such as a 3.8% monthly jump in food prices, primarily as a result of a whopping 30-40% increase in select meat prices in the last 8 months.

How do ordinary people – which excludes those who work in central banks and have taxpayers fund their everyday purchases, which allows them to fully ignore soaring food and rent costs – survive in an environment of soaring food prices?

As the following brief documentary by CBC’s The National reveals, food inflation means people have no choice but to eat “far less beef” than they used to, “or chicken.” Others are ok with the runaway food inflation: “it doesn’t matter to me, I buy the meat at the price it is and that’s fine with me” say a gentleman who likely works for a hedge fund and BTFD for a living.

Germany’s top supermarkets, the powerhouses of Europe when it comes to retail, have delivered a blow to the biotech industry by forcing the German poultry industry to return to the use of non-GMO feed.

It was announced last Thursday that the German supermarkets, with a broad consensus, recently demanded from the German Poultry Association (ZDG) to stop using GMO feed for both egg and poultry meat production, starting from January 1st 2015. That is the date when the retailers want to receive GMO-free fed products again, meaning poultry suppliers will have to rush to get their feed supply chains free from GMO feed once more.

Yesterday, the U.S. Justice Department approved the merger between Tyson Foods and Hillshire Brands, requiring an important divestiture, but nonetheless allowing one of the largest meat processing mergers in years.

All food prices are rising everywhere.

HAIKU, Hawaii (INTELLIHUB) — I went to the local market today in search of a few steaks to barbeque tonight with my family and what I found may shock you.

Not only could I not afford the three cuts of steak I needed for the dinner I was going to whip up, to top it all off the steaks were very small by proportion.

At nearly $16.00 per pound I had to pass, looks like we will be eating a lot of rice and beans in the near future as meat has become unaffordable for most middle-class Americans.