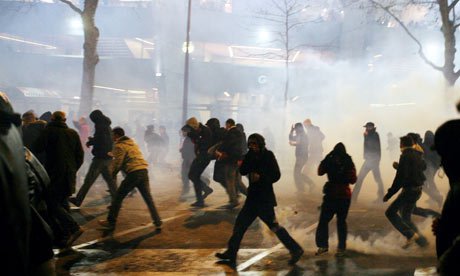 – French City with 40% Muslim Population is the Most Dangerous City in Europe:

Muslims have now set up unofficial checkpoints in various parts of Marseille.

The French city of Marseille has an estimated30 to 40 percent Muslim population and has been ranked as the most dangerous city in Europe.

The gritty Mediterranean port, France’s second-largest city, was appointed the “cultural capital of Europe,” a rotating European Union honor. City fathers launched beautification projects, created new tourism attractions and invited people from around the world to visit. A splendid stone esplanade was laid around the Old Port, peppered with novel sculpture, and a high-tech historical museum went up next to City Hall.

How did that work out?

France’s worst period of strikes and civil disobedience for 15 years has brought the city of Marseille almost to a standstill. 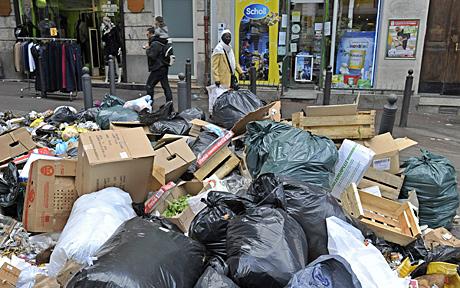 People walk past piled up garbage in Marseille, the result of an eleven day strike by rubbish collectors Photo: AFP

The cars abandoned along the stretch of motorway leading to Marseille Airport made it look as if the inhabitants of France’s second city had fled some terrible disaster.

Their owners had in fact parked as neatly as they could and dragged their suitcases to the terminal on foot to catch flights to holiday destinations and business meetings – the only way to get past the barricades that were thrown up by protesters on Thursday morning.

Marseille has been crippled by strikers. A fleet of huge ships cruises offshore, unable to dock, their lights reflecting against the still waters of the port at night. From the air it looks like a giant game of Battleships.

In the city centre, streets are still piled high with rubbish after the refuse collectors joined dock workers, train drivers, students and airport staff who have brought the city almost to a standstill.

The worst period of strikes and civil disobedience for 15 years erupted after President Nicolas Sarkozy tried to introduce austerity measures – in particular raising the retirement age from 60 to 62. As the anger rose, so did the piles of rubbish in Marseille’s streets.

“This city looks like a war zone,” said William Paterson, an American-French lawyer who has lived there for 18 years. “How can this be allowed to happen?”