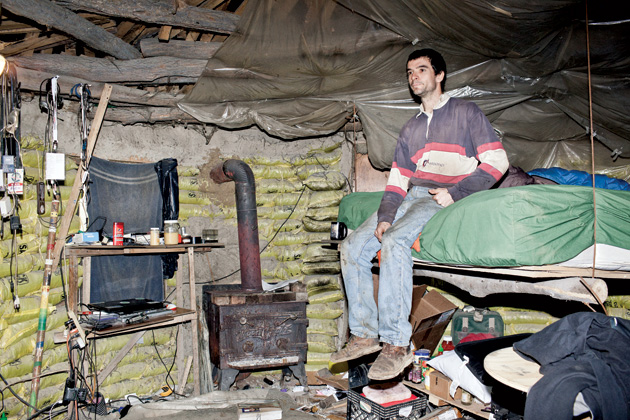 Marcin Jakubowski sits cross-legged on the dirt floor of a round hut in Missouri farm country, carefully making an open-faced mayo and cheddar sandwich. Inside the hut there’s a bed, a small desk, a few plastic containers (including one for food), and, occasionally, mice and snakes. It’s 104F out and only slightly cooler inside. There’s no fridge, so just how the mayonnaise hasn’t spoiled is something of a mystery. Jakubowski, who’s of average height and extremely fit, wears khakis and a long-sleeve oxford shirt. “What we are doing here is conducting a civilization reboot experiment,” he says. He carefully places cheddar shreds on top of the mayo, squirts the works with Sriracha hot sauce in a precise cross-hatch pattern, bites, chews. “It’s about sustainable living and having open access to critical information and tools.”

Jakubowski’s hut anchors a 30-acre compound near Maysville, Mo., full of wooden shacks, yurts, work sheds, flapping laundry, clucking chickens, and a collection of black and strange-looking machinery. A dozen or so people in their twenties, none of whom appears to have bathed in a while, wander around or fiddle with the machines. Jakubowski has named the place Factor e Farm, though the goal isn’t just the cultivation of crops. Rather, it’s to create a completely self-sufficient community that produces not only its own food, but also energy, tools, and raw materials for making those tools. Jakubowski’s ultimate purpose is both to live off the grid and to teach others—whether out of choice or necessity—how to do so too.

In 2007, Jakubowski began working on a minimum set of machines necessary to sustain a modern civilization. It comprises bread ovens, aluminum smelters, tractors, brick presses, and 46 others. Factor e Farm has already built 15 of these devices, including a computer-controlled torch table that can cut intricate patterns on metal with a jet of superheated ionized gas. Work will com-mence soon on a cement mixer, a sawmill, and an industrial robot. 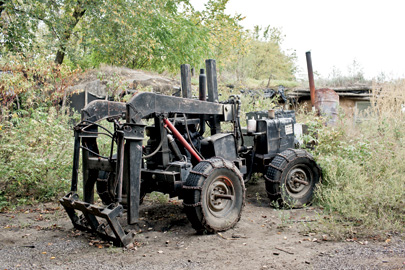 Most of Factor e Farm’s equipment runs on an in-house invention called a Power Cube. It’s a black metal box about the size of an office copier, with a 27-horsepower engine that runs a hydraulic pump. The Power Cube’s engine can drive the bulldozers; the pumps can power the table saws and other smaller, stationary machines.