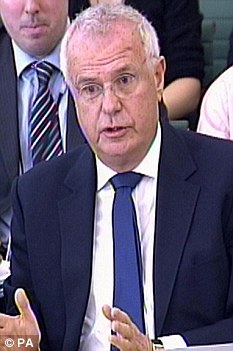 He also said he thought the worst of the financial sector crisis was over. (The worst is yet to come.)

There were immediate accusations that he was ‘glossing over’ the unprecedented risk to the public purse of saving the UK’s stricken financial houses.

The Government has pumped some £60billion into Royal Bank of Scotland, Lloyds TSB and HBOS through cash injections and by underwriting reckless loans.

Experts at the International Monetary Fund have predicted that the total bill will eventually reach a jaw- dropping £130billion. The rescue deal has helped swell national debt to record levels.

There has been outrage from ordinary families who will suffer for decades from soaring taxes and cuts to public services as governments grapple to get to grips with the financial disaster.

But Lord Myners insisted that the bailout was actually an ‘investment’ that would bear fruit. (Devaluation of the pound? The UK defaulting on its debt?)