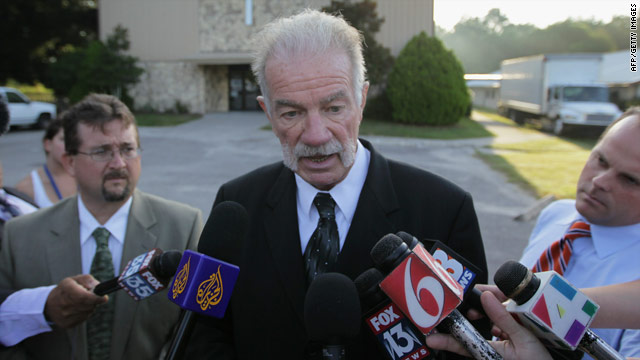 (CNN) — The pastor of a Florida church says his congregation has decided to call off the burning of the Quran that was to be held Saturday — the ninth anniversary of the September 11, 2001 attack on the United States by the al Qaeda terror network.

“We will definitely not burn the Quran,” the Rev. Terry Jones told NBC’s “Today” on Saturday “Not today, not ever.” The burning had been planned for 6 p.m.

Jones arrived in New York late Friday night and was working to set up a meeting with the imam in charge of the Islamic center planned near ground zero. The planned meeting, Jones had said, helped persuade him to halt the burning.

Earlier Friday, Jones gave mixed messages about whether he intends to carry out his plans, which have sparked international controversy and protests in the Muslim world. U.S. military leaders said the event would imperil the lives of troops abroad.

– Florida pastor not backing down on Koran-burning (Reuters)

– Should Petraeus have weighed in on Koran burning? General defends himself. (Christian Science Monitor) 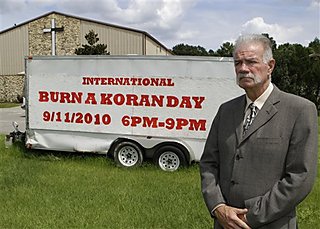 Rev. Terry Jones at the Dove World Outreach Center in Gainesville, Fla., Monday, Aug. 30, 2010. Jones plans to burn copies of the Koran on church grounds to mark the Sept. 11, 2001 terrorist attacks on the United States that provoked the Afghan war. (AP Photo/John Raoux)

The leader of a small Florida church that espouses anti-Islam philosophy said Wednesday he was determined to burn copies of the Koran on Sept. 11, despite pressure from the White House, religious leaders and others to call it off.

Pastor Terry Jones said at a press conference that he has received a lot of encouragement, with supporters mailing copies of the Islamic holy text to his Gainesville church of about 50 followers. He proclaimed in July that he would stage “International Burn-a-Koran Day” to mark the ninth anniversary of 9/11.

“As of right now, we are not convinced that backing down is the right thing,” said Jones, who took no questions.

Jones said he has received more than 100 death threats and has started carrying a .40-caliber pistol since announcing his plan to burn the book Muslims consider the word of God and insist be treated with the utmost respect. Jones, 58, was flanked by an armed escort Wednesday.

Gen. David Petraeus, the top U.S. and NATO commander in Kabul, took the rare step of a military leader taking a position on a domestic matter when he warned in an e-mail to The Associated Press that “images of the burning of a Koran would undoubtedly be used by extremists in Afghanistan — and around the world — to inflame public opinion and incite violence.”

Petraeus spoke Wednesday with Afghan President Karzai about the matter, according to a military spokesman Col. Erik Gunhus. “They both agreed that burning of a Koran would undermine our effort in Afghanistan, jeopardize the safety of coalition troopers and civilians,” Gunhus said, and would “create problems for our Afghan partners … as it likely would be Afghan police and soldiers who would have to deal with any large demonstrations.”

Secretary of State Hillary Rodham Clinton said that the pastor’s plans were outrageous, and along with Defense Secretary Robert Gates, urged Jones to cancel the event.

“It is regrettable that a pastor in Gainesville, Florida, with a church of no more than 50 people can make this outrageous and distrustful, disgraceful plan and get the world’s attention, but that’s the world we live in right now,” Clinton said in remarks to the Council on Foreign Relations.

Jones gained some local notoriety last year when he posted signs in front of his church declaring “Islam is of the Devil.” But his Koran-burning idea attracted wider attention. It drew rebukes from Muslim nations and at home as an emotional debate was taking shape over the proposed Islamic center near the ground zero site of the 2001 terrorist attacks in New York.