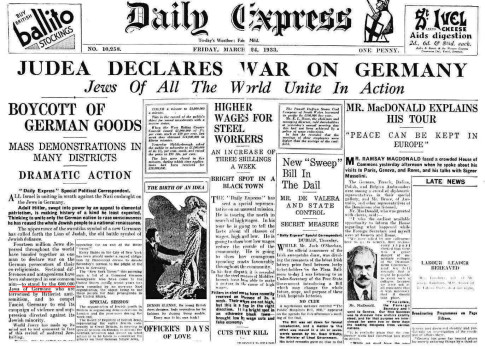 – How Jewish leaders forced jews to go to Israel:

With Hitler, Jewish leaders couldn’t have directly a massive immigration to Israel. But they were able to:

It wasn’t big. But it was a beginning.

Jesus called them the “synagogue of Satan”, sons of the devil and generation of vipers and was obviously really pissed of at the ‘banksters’ in the temple.

I wonder why they’ve killed him????

Nothing has changed, if you are aware of what s going on in the world today. 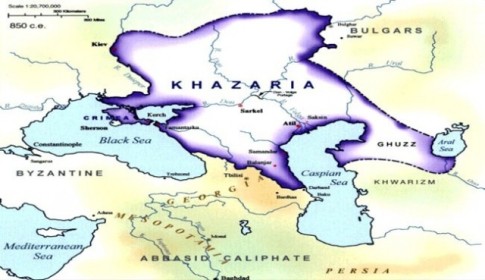 – Racial origin of the “Jews”; not Israelites, but descendants of Khazars, Edomites, Canaanites, Cain, and ultimately Satan:

“Strictly speaking it is incorrect to call an Ancient Israelite a Jew or to call a contemporary Jew an Israelite or a Hebrew.” (1980 Jewish Almanac, p. 3).

*Note: Edom is another name for Esau, the brother of Jacob/Israel

“And I hated Esau, and laid his mountains and his heritage waste for the dragons of the wilderness. Whereas Edom saith, We are impoverished, but we will return and build the desolate places; thus saith the LORD of hosts, They shall build, but I will throw down; and they shall call them, The border of wickedness, and, The people against whom the LORD hath indignation for ever.” (Malachi 1:3-4)

Yahshua speaking to the Jewish Pharisees:

“Ye serpents, ye generation of vipers, how can ye escape the damnation of hell?” (Matthew 23:33)

Read moreRacial origin of the “Jews”; not Israelites, but descendants of Khazars, Edomites, Canaanites, Cain, and ultimately Satan

– How The Ashkenazi Jews Conquered The West:

(If you do not know the origin of the Ashkenazim, you might want to do so before reading this article by clicking here.)

To conquer the West, the Ashkenazim applied a simple two-step process:

1) morph themselves into God’s Chosen People;

2) take over the issuance of money.

They fully understood that there are only two entities that most men on earth revere: God and Money.

“You cannot serve both God and money.” Matthew 6:24

So they succeeded in steering both to their advantage.

And that is why Jesus was constantly rebuking the Pharisees.

“You belong to your father, the devil, and you want to carry out your father’s desires. He was a murderer from the beginning, not holding to the truth, for there is no truth in him. When he lies, he speaks his native language, for he is a liar and the father of lies.” John 8:44

“You have let go of the commands of God and are holding on to human traditions.” Mark 7:8

“You serpents, you brood of vipers, how will you escape the sentence of hell?” Matthew 23:33

“Woe unto you, scribes and Pharisees, hypocrites! for ye compass sea and land to make one proselyte, and when he is made, ye make him twofold more the child of hell than yourselves.” Matthew 23:15

– The Word Jew Is NOT In The Bible:

But Blunt Publisher Manipulation Is

“A lie can travel halfway around the world while the truth is putting on its shoes.” – Mark Twain

Read moreThe Word Jew Is NOT In The Bible

Read moreIsrael Is The Problem

– Are Jews The Israelites Of The Bible?:

The Awkward Moment When Jews Realize They’re The Goyim