In the final stretch of the presidential race which has just a few days left, Wikileaks continues its ongoing broadside attack against the Clinton campaign with the relentless Podesta dump, by unveiling another 2,458 emails in the latest, Part 25 of its Podesta release, bringing the total emails released so far to exactly 41,969.

Last Friday, I published a post titled, John Podesta’s Sister-in-Law Lobbied For Raytheon While Hillary Was Secretary of State, which understandably got totally buried in the madness surrounding the latest FBI news. Here’s the first paragraph of that post:

The Podesta family seems particularly adept at earning extraordinary sums of money via selling out the American public. Earlier this year, I highlighted how John Podesta’s brother Tony was paid $140,000 per month by the medieval monarchy of Saudi Arabia. After all, who cares about women’s rights when the pay is good?

Indeed, it’s not just relatives of Podesta who know how to rake in the cash. John is no slouch either, as Politico explained in an article published earlier today. 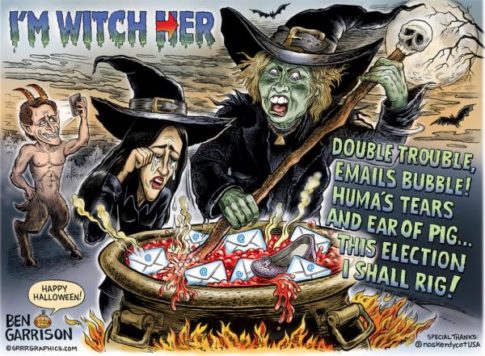 –  Jim Stone: Here is an incomplete list of reporters now confirmed to have been in Hillary’s back pocket:

This list has been compiled for easy reading, the original, from the Podesta mails, is Here

Now you know the type of things donations to the Clinton foundation really went to! Buying off these reporters would not be cheap!

Read moreJim Stone: Here is an incomplete list of reporters now confirmed to have been in Hillary’s back pocket

– John Podesta’s Best Friend At The DOJ Will Be In Charge Of The DOJ’s Probe Into Huma Abedin Emails:

Now that the FBI has obtained the needed warrant to start poring over the 650,000 or so emails uncovered in Anthony Weiner’s notebook, among which thousands of emails sent from Huma Abedin using Hillary Clinton’s personal server, moments ago the US Justice Department announced it is also joining the probe, and as AP reported moments ago, vowed to dedicate all needed resources to quickly review the over half a million emails in the Clinton case.

In the letter to Congress, the DOJ writes that it “will continue to work closely with the FBI and together, dedicate all necessary resources and take appropriate steps as expeditiously as possible,” assistant attorney General Peter J. Kadzik writes in letters to House and Senate lawmakers.

Wikileaks continues its ongoing broadside attack against the Clinton campaign with the relentless Podesta dump, by unveiling another 2620 emails in the latest, Part 24 of its Podesta release, bringing the total emails released so far to exactly 39,511.

– Doug Band To John Podesta: “If This Story Gets Out, We Are Screwed”:

“John, I would appreciate your feedback and any suggestions I’m also starting to worry that if this story gets out, we are screwed.“