The consortium in charge of restructuring the world’s most infamous private-security firm just added a new chief in charge of keeping the company on the straight and narrow. Yes, John Ashcroft, the former U.S. attorney general, is now an “independent director” of Xe Services, formerly known as Blackwater.

Ashcroft will head Xe’s new “subcommittee on governance,” its backers announced early Wednesday in a statement. The subcommittee is designed to “maximize governance, compliance and accountability” and “promote the highest degrees of ethics and professionalism within the private-security industry.”

In other words, no more shooting civilians in Iraq and Afghanistan, no more signing for weapons its guards aren’t authorized to carry in war zones, no more impersonations of cartoon characters to acquire said weaponry, and no more ‘roids and coke on the job. 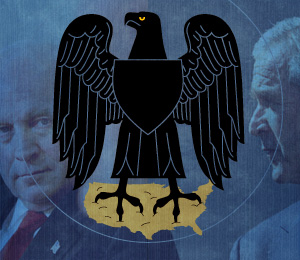 WASHINGTON – In 2002, as evidence of prisoner mistreatment at Guantánamo Bay began to mount, Federal Bureau of Investigation agents at the base created a “war crimes file” to document accusations against American military personnel, but were eventually ordered to close down the file, a Justice Department report revealed Tuesday.

The report, an exhaustive, 437-page review prepared by the Justice Department inspector general, provides the fullest account to date of internal dissent and confusion within the Bush administration over the use of harsh interrogation tactics by the military and the Central Intelligence Agency.

In one of several previously undisclosed episodes, the report found that American military interrogators appeared to have collaborated with visiting Chinese officials at Guantánamo Bay to disrupt the sleep of Chinese Muslims held there, waking them every 15 minutes the night before their interviews by the Chinese. In another incident, it said, a female interrogator reportedly bent back an inmate’s thumbs and squeezed his genitals as he grimaced in pain.

The report describes what one official called “trench warfare” between the F.B.I. and the military over the rough methods being used on detainees in Guantánamo Bay, Afghanistan and Iraq.

The report quotes passionate objections from F.B.I. officials who grew increasingly concerned about the reports of practices like intimidating inmates with snarling dogs, parading them in the nude before female soldiers, or “short-shackling” them to the floor for many hours in extreme heat or cold.

Such tactics, said one F.B.I. agent in an e-mail message to supervisors in November 2002, might violate American law banning torture.

More senior officials, including Spike Bowman, who was then the head of the national security law unit at the F.B.I., tried to sound the alarm as well.

“Beyond any doubt, what they are doing (and I don’t know the extent of it) would be unlawful were these enemy prisoners of war,” Mr. Bowman wrote in an e-mail message to top F.B.I. officials in July 2003.