A General Services Administration inspector general released a scathing letter Thursday accusing White House operatives of slow-walking open records requests and wrongly punishing conservative watchdog group Judicial Watch. Meanwhile, the watchdog group revealed on Thursday that the FBI had no plans to question Clinton’s aides in its “half-baked” email investigation until it was clear that Judicial Watch was going to, and then the FBI used JW’s own redacted FOIA documents to question them.

Via the Washington Times:

The GSA botched several high-profile open records requests, delaying them for months while political appointees got involved, Inspector General Carol F. Ochoa said. The findings were released while the administration was facing charges of slow-walking open records requests for Hillary Clinton’s emails, as well as other requests.In the case of Judicial Watch, the order to strip it of media status came from political operatives with long ties to Democratic causes — and even from the White House.

The inspector general said the decision came at the behest of Gregory Mecher, a former Democratic campaign fundraiser who at the time was liaison to the White House. He is married to Jen Psaki, a longtime spokeswoman with the Obama administration and its election campaigns.

In case you weren’t aware, Venezuelan authorities recently accused the U.S. of attempts to overthrow its government. In a press conference, U.S. State Department spokeswoman, Jen Psaki, vehemently denied such claims and then went ahead and spouted talking points so ridiculous, only a complete ignoramus could believe them. She said:

As a matter of long-standing policy, the United States does not support political transitions by non-constitutional means.

Interesting, because it seems to me that the primary role of U.S. foreign policy throughout my lifetime has been specifically to initiatepolitical transitions by non-constitutional means.

US State Department spokesperson Jen Psaki has been caught on a hot mic calling one of her prepared statements about the acquittal of Egypt’s ex-leader Hosni Mubarak “ridiculous.”

The State Department spokesperson attempted to dodge the question with a convoluted platitude. 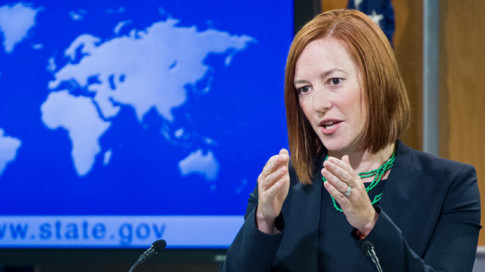 Let’s say for a moment that China is Israel and that the U.S. is Palestine.

Now imagine what we would do to China if they would try to do this to us:

Why are we expected to allow Israel to continually steal more land and oppress, brutalize and murder civilians? Why is Israel allowed to come in and occupy the West Bank and threaten the lives and health and well-being of Palestinians?

Why are we expected to allow Israel to continue a siege against Gaza? Click Here then Share Playlist: https://www.youtube.com/watch?v=rZI3U…

Why are we expected to stand by while Israel attacks Palestinians? Why is Israel allowed to terrorize innocent civilians in the West Bank and Gaza?

Read more‘Do Palestinians In Gaza Have The Right To Defend Themselves Against Israeli Aggression?’ Watch Jen Psaki Answer (Video)