– Janet Yellen: What A Horrifying Choice For Fed Chairman She Would Be

President Barack Obama nominated Janet Yellen to be the next chair of the Federal Reserve Board on Wednesday and said she is a proven leader who knows how to build consensus in managing the Fed’s dual mandate of controlling inflation and increasing employment.

At a White House event, Obama also paid tribute to current chair Ben Bernanke, whose term on the board ends in January. Obama urged the Senate to confirm Yellen as soon as possible.

Obama called Bernanke a voice of wisdom during a time of market volatility who helped repair the U.S. economy from the worst recession since the Great Depression. 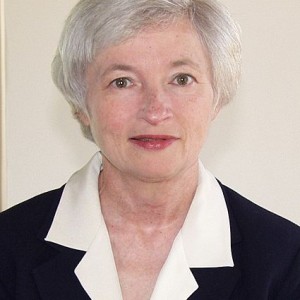 – Janet Yellen: What A Horrifying Choice For Fed Chairman She Would Be (Economic Collapse, Sep 18, 2013):

Are you ready for Janet Yellen?  Wall Street wants her, the mainstream media wants her and it appears that her confirmation would be a slam dunk.  She would be the first woman ever to chair the Federal Reserve, and her philosophy is that a little bit of inflation is actually good for an economy.  She was reportedly the architect for many of the unprecedented monetary decisions that Ben Bernanke made during his tenure, and that has many on Wall Street and in the media very excited.  Noting that we “already know that Yellen is on board with Bernanke’s easy money policies”, CNN recently even went so far as to publish a rabidly pro-Yellen article with this stunning headline: “Dear Mr. President: Name Yellen now!”  But after watching what a disaster Bernanke has been, do we really want more of the same?  It doesn’t really matter whether she is a woman, a man, a giant lizard or a robot, the question is whether or not she is going to continue to take us down the path to ruin that Bernanke has taken us.  As I have written about so many times, the Federal Reserve is at the very heart of our economic problems, and under Bernanke the Fed has created a mammoth financial bubble unlike anything that we have ever seen before.  If Yellen keeps us going down that road, financial disaster is inevitable.

Sadly, Yellen is not a woman that believes in free markets.  She had the following to say back in 1999:

Read moreJanet Yellen: What A Horrifying Choice For Fed Chairman She Would Be