Governor Jan Brewer continues to ignore the international attention paid to Quartzsite, Arizona over $5 million in corruption charges, while the Chief of Police suspended nine of the city’s 14 police officers with pay, ordering them not to leave their homes between the hours of 8 am and 5 pm.

All of the suspended officers blew the whistle on the chief, calling for an independent investigation into several serious charges, including false arrests and violating federal medical privacy laws.

In response to citizen demands for action, Brewer’s office wrote: 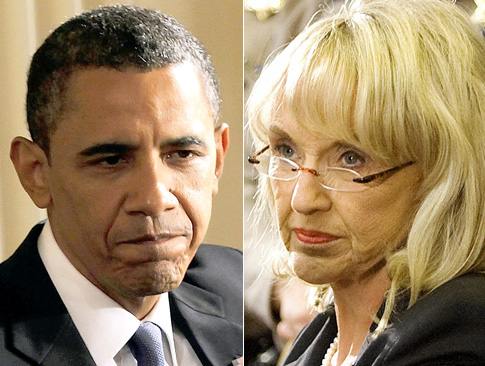 PHOENIX (AP) – Arizona is preparing to ask an appeals court to lift a judge’s ruling that put most of the state’s immigration law on hold in a key first-round victory for the federal government in a fight that may go to the U.S. Supreme Court.

Protesters in Phoenix went ahead with plans Thursday for a march to the state Capitol and a sit-in at the office of Sheriff Joe Arpaio. The sheriff said if protestors were disruptive, they’d be arrested, and he vowed to go ahead with a crime sweep targeting illegal immigrants.

Read moreArizona is preparing an appeal of immigration ruling