“We have shot an amazing number of people, but to my knowledge, none has ever proven to be a threat.”

A senior US general once criticised for saying it was “fun to shoot some people” has been picked to take over US Central Command, leading the military command running the wars in Iraq and Afghanistan. 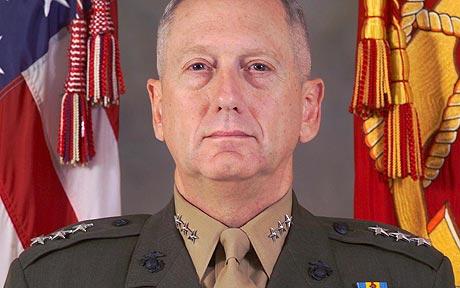 General James Mattis, the current head of the US Joint Forces Command and who previously led troops in Iraq and Afghanistan, had widely been tipped as the next head of Central Command. President Barack Obama must formalise the nomination, which then goes to Congress for approval.

Centcom, as it is known, oversees operations in a volatile swathe of the world that covers 20 countries and stretches from Egypt across the Middle East and into south and central Asia.

Robert Gates, the defence secretary, praised the four-star general as “one of the military’s most innovative and iconoclastic thinkers.”

Gen Mattis was reprimanded at the time by the Marine Corps for telling a conference in San Diego, California: “It’s fun to shoot some people. I’ll be right up front with you, I like brawling.”

During a discussion panel he said: “You go into Afghanistan, you got guys who slap women around for five years because they didn’t wear a veil.

“You know, guys like that ain’t got no manhood left anyway. So it’s a hell of a lot of fun to shoot them.”