“I was part of that strange race of people aptly described as spending their lives doing things they detest, to make money they don’t want, to buy things they don’t need, to impress people they don’t like.” – Emile Gauvreau 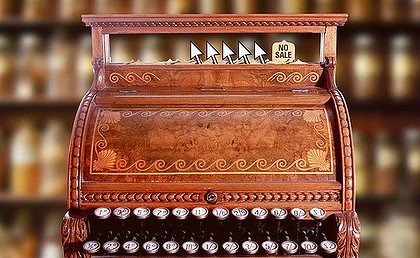 If ever a chart provided unequivocal proof the economic recovery storyline is a fraud, the one below is the smoking gun. November and December retail sales account for 20% to 40% of annual retail sales for most retailers. The number of visits to retail stores has plummeted by 50% since 2010. Please note this was during a supposed economic recovery. Also note consumer spending accounts for 70% of GDP. Also note credit card debt outstanding is 7% lower than its level in 2010 and 16% below its peak in 2008. Retailers like J.C. Penney, Best Buy, Sears, Radio Shack and Barnes & Noble continue to report appalling sales and profit results, along with listings of store closings. Even the heavyweights like Wal-Mart and Target continue to report negative comp store sales. How can the government and mainstream media be reporting an economic recovery when the industry that accounts for 70% of GDP is in free fall? The answer is that 99% of America has not had an economic recovery. Only Bernanke’s 1% owner class have benefited from his QE/ZIRP induced stock market levitation.

Two of the largest retailers in America are steamrolling toward bankruptcy.  Sears and J.C. Penney are both losing hundreds of millions of dollars each quarter, and both of them appear to be caught in the grip of a death spiral from which it will be impossible to escape.  Once upon a time, Sears was actually the largest retailer in the United States, and even today Sears and J.C. Penney are “anchor stores” in malls all over the country.  When I was growing up, my mother would take me to the mall when it was time to go clothes shopping, and there were usually just two options: Sears or J.C. Penney.  When I got older, I actually worked for Sears for a little while.  At the time, nobody would have ever imagined that Sears or J.C. Penney could go out of business someday.  But that is precisely what is happening.  They are both shutting down unprofitable stores and laying off employees in a desperate attempt to avoid bankruptcy, but everyone knows that they are just delaying the inevitable.  These two great retail giants are dying, and they certainly won’t be the last to fall.  This is just the beginning.