See it happen in real time: fast forward to 3:10 in the clip below to see an underwater power station explode. 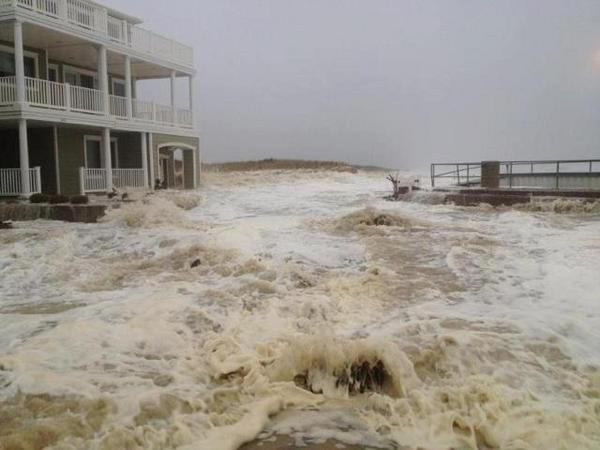 The biggest storm to ever hit the northeast United States is creating a tremendous amount of havoc up and down the eastern seaboard.  It is hard to describe how gigantic this storm actually is.  From end to end, Hurricane Sandy is more than 1000 miles across.  It is twice the size of the state of Texas, and meteorologists are calling this storm a “worst case scenario“.  It is currently coming ashore in New Jersey, but this is just the beginning.  A winter storm approaching from the west is going to combine with Hurricane Sandy, and the combined storm is projected to hammer the northeast with wind and rain all the way through the end of the week.  Meteorologists all over the nation are saying that they have never seen anything like this.  Hurricane Sandy is the biggest storm in modern U.S. history, and earlier today the storm pressure was recorded to be even lower than the Long Island Express Hurricane of 1938.  In fact, Hurricane Sandy has the lowest pressure ever recorded for any storm north of the state of North Carolina.  On Monday evening it was packing maximum sustained winds of about 90 miles per hour, and hurricane-force winds could be felt as far out as 175 miles from the center of the storm.  To say that this storm is a major disaster is a tremendous understatement.On Monday night, it is projected that wind speeds in New York City could reach 80 miles per hour.  But that is only part of the story.  The higher you go, the more intense the winds will be.  For example, if you live 30 stories above New York, a gust of wind at 80 miles per hour on the ground will be close to 100 miles per hour for you.

Read moreWorst Case Scenario: Hurricane Sandy Is The Biggest Storm Ever To Hit The Northeast