In a typical display of utter disregard for the general public, the Noda administration announced last night that there would be no more joint press conference where reporters could meet with TEPCO people and the government officials from the Cabinet Office and other relevant ministries and agencies, receive updates and ask questions.

The last night’s joint press conference is to be the last one, now that Fukushima I Nuclear Power Plant is officially in a “state of a cold shutdown” and the accident has been decreed by the government to be “over”.

Here’s what Minister in charge of the accident and Minister of the Environment Goshi Hosono had to say last night in the last joint press conference, as reported by Nifty News (12/16/2011):

Minister of the Environment Hosono expressed some concern that “No one knows where the fuel is until we open the reactors”, but he reaffirmed the cold shutdown, following the lead of his prime minister. He said, “No matter where the fuel is, it is being cooled”.

Trust us, take our word for it, he says.

Read moreJapan Government: Fukushima Nuclear Plant In State Of Cold Shutdown! – Minister Hosono: ‘No One Knows Where The Fuel Is’

“I think it’s remarkable that we’ve come this far,” Hosono said. “The situation at the beginning was extremely severe. At least we can say we have overcome the worst.”

The worst is yet to come:

A possible worst case scenario looks like this (Flashback):

– If Fukushima Reactor No. 4 Fuel Rods Spill On The Ground Tokyo And Yokohama Will Be Lost

– Excellent Arnie Gundersen Interview: Leave Tokyo If There Is A Severe Aftershock And The Unit 4 Building Collapses, Now That The Winds Have Turned 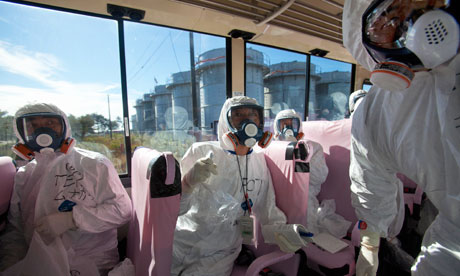 Tepco officials and journalists look at the crippled Fukushima Daiichi nuclear power plant from inside a bus. Photograph: Reuters

Conditions inside the Fukushima nuclear plant in Japan remain grim and shambolic eight months after the site was devastated by an earthquake and tsunami, according to the first journalists allowed inside since the disaster.

Officials showed reporters around the plant for the first time since March when the natural disasters triggered a meltdown in three of the plant’s reactors, the worst nuclear accident since Chernobyl 25 years ago.

He said: “There’s debris all around where the reactors are – twisted metal, crumpled trucks, large water tanks that have been dented and bent.

“You can see that this stuff has been strewn around and it has not been picked up and it’s been there for eight months.

“So I think that more than anything is a testament to how difficult a time they’ve had in trying to get those reactors under control.”

The visitors all wore full protective suits, double layers of gloves and plastic boot covers and hair nets, and carried respiration masks and radiation detectors, as the site remains highly radioactive. (Shaking my head in disbelief.)

Read moreTEPCO Opens Fukushima Nuclear Plant To Journalists – Prof. Hiroaki Koide: ‘Nobody Knows Where Exactly The Fuel Is, Or In What Condition’

The problem is that there are NO safe levels of radiation! See links here.

If you have visited those links, then you will agree with Hokkaido Cancer Center director Nishio Masamichi, a radiation treatment specialist:

‘I Just Cannot Feel Any Hope For Japan’s Future’

Nishio Masamichi’s article has been published on June 27 and since then things have gotten much worse.

“Up to a million people have already died from Chernobyl, and people will continue to die from cancer for virtually the rest of time. What we should know is that a millionth of a gram of plutonium, or less, can induce cancer, or will induce cancer. Each reactor has 250 kilos, or 500 pounds, of plutonium in it. You know, there’s enough plutonium in these reactors to kill everyone on earth.
…
You don’t understand internal emitters. I was commissioned to write an article for the New England Journal of Medicine about the dangers of nuclear power. I spent a year researching it. You’ve bought the propaganda from the nuclear industry. They say it’s low-level radiation. That’s absolute rubbish. If you inhale a millionth of a gram of plutonium, the surrounding cells receive a very, very high dose. Most die within that area, because it’s an alpha emitter. The cells on the periphery remain viable. They mutate, and the regulatory genes are damaged. Years later, that person develops cancer. Now, that’s true for radioactive iodine, that goes to the thyroid; cesium-137, that goes to the brain and muscles; strontium-90 goes to bone, causing bone cancer and leukemia. It’s imperative … that you understand internal emitters and radiation, and it’s not low level to the cells that are exposed. Radiobiology is imperative to understand these days.”

NHK has been quite busy recently spreading the good news that radiation exposure is somehow not what you’ve been led to believe by silly bloggers and tweets, if you only listen to the government experts and politicians.

In October, NHK did a program where the meals prepared in different households in different locations in Japan, including two in Fukushima Prefecture were analyzed for radiation. Surprise, surprise, the meals in a family in Koriyama City, Fukushima contained zero radioactive materials while other families in other locations had a small amount of radioactive materials in their meals. (NHK actually said “zero”, instead of “below detection limit”.) Well, the caveat was that the researcher’s equipment (germanium semiconductor detector) to analyze the radiation turned out to be broken, and NHK had to take down the test result page from the website. (If you read Japanese, the sorry story is related here, for example.)

But the program had been aired already, and probably it has convinced quite a few mothers not to worry about radiation any more when they go shopping for food for the families. NHK says so, it’s safe! I feel so bad for having avoided Fukushima produce!

Goshi Hosono, Minister in charge of nuclear accident, gave a lecture in Hamamatsu City [in Shizuoka Prefecture] and indicated that he would create a working group of experts to study the effect of low-level radiation of about 20 millisieverts per year on health, in the aftermath of the Fukushima I Nuclear Power Plant accident.

Minister Hosono said, “If the annual cumulative radiation level is 100 millisieverts and above, we know from the past nuclear plant accidents that there will be some effect on health. But other than that, nothing is confirmed.”