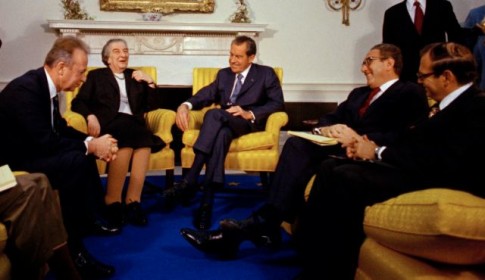 Documents reveal contacts between Washington and Jerusalem in late 1960s, when some Americans believed the nuclear option would not deter Arab leaders but would trigger an atom bomb race.

The Obama administration this week declassified papers, after 45 years of top-secret status, documenting contacts between Jerusalem and Washington over American agreement to the existence of an Israeli nuclear option. The Interagency Security Classification Appeals Panel (ISCAP), which is in charge of approving declassification, had for decades consistently refused to declassify these secrets of the Israeli nuclear program.

The documents outline how the American administration worked ahead of the meeting between President Richard Nixon and Prime Minister Golda Meir at the White House in September 1969, as officials came to terms with a three-part Israeli refusal – to sign the Non-Proliferation Treaty; to agree to American inspection of the Dimona nuclear facility; and to condition delivery of fighter jets on Israel’s agreement to give up nuclear weaponry in exchange for strategic ground-to-ground Jericho missiles “capable of reaching the Arab capitals” although “not all the Arab capitals.”

The officials – cabinet secretaries and senior advisers who wrote the documents – withdrew step after step from an ambitious plan to block Israeli nuclearization, until they finally acceded, in internal correspondence – the content of the conversation between Nixon and Meir is still classified – to recognition of Israel as a threshold nuclear state.

In fact, according to the American documents, the Nixon administration defined a double threshold for Israel’s move from a “technical option” to a “possessor” of nuclear weapons.