After the coming (planned) financial collapse it will get worse, much, much worse!

A SUSPECTED ISIS gunman was shot dead by cops after killing three and injuring a dozen others in a gun rampage and supermarket hostage attack.

The attacker, named as 26-year-old Redouane Lakdim, was killed in a hail of bullets after anti-terror cops stormed the Super U store in Trebes, south-east of Toulouse.

The Jupiter style governing of Macron isn't working out very well. At least the EU still loves him. pic.twitter.com/RH5IpVMiM0

"Refugees" attack trucks in an attempt to get to the UK on the road from Calais. pic.twitter.com/Lps4pUCOLk

What follows is a translation of the entire pamphlet, with the most notable segments highlighted:

“We are citizens with different opinions, and very often find ourselves opposing one another, who have agreed to express, regardless of what is currently in the news, their concern in the face of the rise of Islamism. It is not our similarities that bind us, but the feeling of the danger to freedom in general and not just the freedom of thought. What binds us today is of a more fundamental nature than that which will undoubtedly separate us tomorrow.

– France: Toward Total Submission To Islam, Destruction Of Free Speech:

Authored by Guy Milliere via The Gatestone Institute,

After the murders of much of the staff at the French satirical magazine Charlie Hebdo in Paris on January 7, 2015, the hostage-taking and slaughter at a kosher supermarket two days later confirmed what was already obvious: France was a target of Islamic terrorism. A huge demonstration, organized in Paris on January 11, brought together a million and a half people, with politicians from around the world in attendance.

For a brief moment, France seemed to be the country where the multitudes were ready to stand up for freedom of speech, and the government was ready to fight for Western values.

Unfortunately, that impression did not last long.

WATCH | French police suppress a demonstration by migrants and the far-left who desecrate the Basilique Cathédrale de #SaintDenis – the final resting place of French kings and queens. Total disregard for Western civilisation and its history!

An Islamic school teacher in France has been sentenced to one year in jail for brutally beating his 12-year-old student and for shaving off the boy’s “non-Koranic” hair, which was colored blonde.

The teacher, along with three other men, was convicted of kidnapping and violence against a minor by the Pontoise criminal court on Friday, French media report. The shocking incident occurred last April, when the boy showed up at his Arabic class at the Sablon mosque, in the municipality of Sarcelles, north off Paris.

– Sri Lankan Migrants Scalp Man and Cut Off His Arm in Paris Restaurant:

In what has been described as a dispute between rival Sri Lankan migrants, two men attacked another with a machete, scalping him and cutting off his arm in a Paris restaurant.

The attack occurred on Monday evening at a restaurant in the 10th arrondissement of the city not far from the heavily migrant populated area of La Chapelle in northern Paris, broadcaster RTL reports.

Two attackers, both wearing hoodies and covering their faces, were said to have stormed into the establishment at around 9:30 pm armed with a machete and a sabre. The pair immediately attacked the victim, cutting at his scalp as well as cutting off one of his hands and his arm.

– French children being taught migration is a “human right” and “we are all Africans”:

France is safe and prosperous only thanks to a ‘lifetime of open borders’, while mass migration is a “universal right”, according to literature being handed out in French classrooms.

The madness is complete. This brazen propaganda about France’s suicidal immigration policy is embarrassing, as is the fact that people actually buy into this irrationality. Most dangerous is that it is being taught in classrooms.

Despite French law requiring politics be kept out of state school classrooms, the material makes no attempt to hide its far-left bent, suggesting that any attempt to question the age of so-called unaccompanied minors is an affront to basic human rights.

Contrary to being “safe” due to open borders, France is in chaos due to mass Muslim migration, as are other European countries, and conditions are worsening. Ricard Abitbol, President of the Confederation of Jews in France, has already warned that “in a few decades, there will be no Jews in France” as a result of violent Islamic anti-Semitism related to the influx of Muslim migrants. Right before Christmas, France allowed Muslim street prayers, but banned a Christmas movie as “too Christian.” In November, a French academic, Professor Christian de Moliner, suggested the creation of a Muslim state within France in order to prevent a civil war. In an attitude of complete surrender, De Moliner stated that “we will never be able to eradicate the radical Islamism.” Then recently, in a stunning show of disrespect, Ahmet Ogras, president of the French Council of the Muslim Faith, warned French leader Emmanuel Macron not to meddle with Islam.

Many in France have already surrendered to the march of political Islam and are now in fact tacitly advocating it in the classroom, as we see in the distribution of propaganda by taxpayer-funded “Secular Solidarity,” which is not secular at all.

All in all, “France is no longer France,” and rather than try to salvage its peaceful society and democratic order, many leaders are now waving the banner of the House of Islam, declaring in the classroom that the hijrah as a “universal right.”

The French people however, have a different opinion, despite their passivity in electing Emmanuel Macron. Most believe that there are “too many foreigners in France and Islam not compatible” with French society.

The left betrayed the people and did nothing against colonisation of French town by Islamists https://t.co/tWIzLOToxx#islam,#muslims,#france,#islamization

Macron: "France Will Strike" If Chemical Weapons Used In Syriahttps://t.co/tD6VBmQ7yt

Well, that rapist certainly is not human.

A 29-year-old French (only in his passport!) man went on trial on Tuesday in a Paris suburb (sic!) accused of sexually abusing 11-year-old girl in a case that has rekindled debate about France’s age of consent.

France does not have a legal age under which a minor cannot agree to a sexual relationship – although the country’s top court has ruled that children aged five and under cannot consent. Lawyers for the suspect argued that the girl was consenting and aware of what she was doing, while lawyers for the girl have said she was simply too young and confused to resist.

In a decision that shocked many, the prosecutor’s office in the town of Pontoise decided to put the man on trial not for rape but on charges of “sexual abuse of a minor under 15”.

'It was like an explosion': Western France shaken by 4.8 magnitude earthquakehttps://t.co/TpJddQhyoP

Paris is predicted to get burnt completely to the ground.

Paris can't deal with all the migrants. The city of lights is becoming the city of migrant ghettos pic.twitter.com/f7cHt0yKEC

Do not make the mistake of booking accomodation near Parc de la Villette. It is just awful! It is basically a ghetto where people are getting mugged in broad daylight. Parts of the city are just like you'd expect in 3rd world slums.

France to pour $45bn into nukes as part of defense spending hike https://t.co/wTx080Sz6T

Hundreds of Africans and Asians armed with knives and iron rods fought running street battles in the northern port city of Calais on February 1, less than two weeks after French President Emmanuel Macron visited the area and pledged to crack down on illegal immigration.

The clashes plunged Calais — emblematic of Europe’s failure to control mass migration — into a war zone and reinforced the perception that French authorities have lost control of the country’s security situation.

The mass brawls, fought in at least three different parts of Calais, erupted after a 37-year-old Afghan migrant running a human trafficking operation fired gunshots at a group of Africans who did not have money to pay for his services. Five Africans suffered life-threatening injuries.

Within an hour, hundreds of Eritreans, Ethiopians and Sudanese took to the streets of Calais and attacked any Afghans they could find. More than a thousand police officers using batons and tear gas were deployed to restore order. Two dozen migrants were hospitalized.

French Interior Minister Gérard Collomb described the level of violence in Calais as “unprecedented.” He attributed the fighting to an escalating turf war between Afghan and Kurdish gangs seeking to gain control over human trafficking between Calais and Britain, which many migrants view as “El Dorado” because of its massive underground economy. Each day around 40 ferries depart Calais for Britain.

Four teenage migrants are in critical condition after being shot during a massive two-hour brawl in the French port city of Calais. The fight broke out between Afghani migrants and those from the northeast African country of Eritrea while waiting in line for food handouts. While the migrants primarily used sticks, stones and iron bars, it is unclear who shot four of the Eritreans aged between 16 and 18. 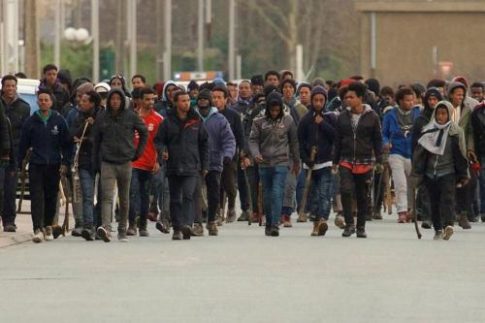 At least 13 more people were injured in the melee, with some suffering “blows from iron bars,” according to the local prosecutor’s office. 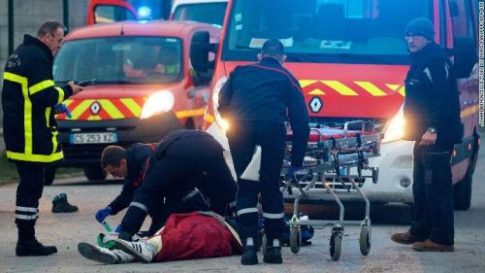 A second brawl broke out three miles away at an industrial site in the southern outskirts if Calais between approximately 20 Afghan migrants vs. 150-200 Eritreans before French police intervened.

Interior minister Gerard Collomb traveled to Calais by helicopter and may stay overnight.

“After today’s serious incidents I shall be heading for Calais tonight to take stock of the situation with the prefect, the mayor and local players,” including police, Collomb tweeted.