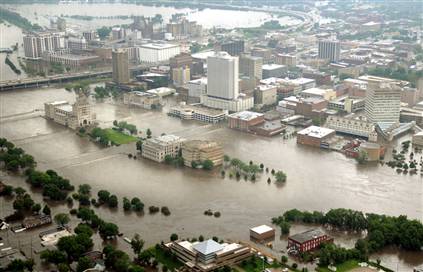 Downtown Cedar Rapids, Iowa, was submerged Thursday by the rising Cedar River. Around 100 blocks were under water, forcing some 10,000 people to flee.

CEDAR RAPIDS, Iowa – Officials evacuated patients from a Cedar Rapids hospital on Friday as the rising waters from the Cedar River confounded the city’s best efforts to secure the downtown area.

The hospital’s 176 patients, including about 30 patients in a nursing home facility at the hospital, were being evacuated to other hospitals in the region. The evacuation started late Thursday night and continued Friday morning in the city of 124,000 residents.

“Some are frail and so it’s a very delicate process with them,” said Karen Vander Sanden, a hospital spokeswoman.

Water was seeping into the hospital’s lower levels, where the emergency generator is located, said Dustin Hinrichs of the Linn County emergency operations center. “They proactively and preventatively started evacuation basically guessing on the fact they were going to lose power,” he said.

Dave Koch, a spokesman for the Cedar Rapids fire department, said the river will crest Friday at about 31.8 feet. It was at 30.9 feet early in the morning. In a 1993 flood, considered the worst flood in recent history, it was at 19.27 feet.

“We are seeing a historic hydrological event taking place with unprecedented river levels occurring,” added Brian Pierce, a meteorologist with the National Weather Service in Davenport. “We’re in uncharted territory — this is an event beyond what anybody could even imagine.”

100 blocks under water
By late Thursday, officials estimated that 100 blocks were under water, where several days of preparation could not hold back the rain-swollen river. Rescuers had to use boats to reach many stranded residents, and people could be seen dragging suitcases up closed highway exit ramps to escape the water.

Read more‘Beyond what anybody could even imagine’