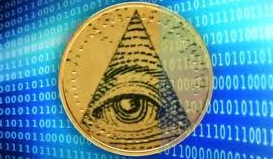 – The Washington Post Propagandizes Again: Says ‘Fedcoin’ Will Be ‘Bigger’ Than Bitcoin:

Fedcoin doesn’t even exist yet, and yet the Washington Post is already hyping it as the primary cryptocurrency that we will be using in the future.

Do they know something that they rest of us do not?

Just a few days ago I warned that global central banks could eventually try to take control of the cryptocurrency phenomenon, and so I was deeply alarmed to see the Post publish this sort of an article.  We want cryptocurrencies to stay completely independent, and we definitely do not want the Federal Reserve and other global central banks to start creating their own versions.  Because of course once they create their own versions they will want to start restricting the use of any competitors.

The one thing that could derail the cryptocurrency revolution faster than anything else would be interference by national governments or global central banks.  Unfortunately, now that Bitcoin, Litecoin, Ethereum and other cryptocurrencies are getting so much attention, it is inevitable that the powers that be will make a move.

On Monday, the Washington Post published an opinion piece by Professor Campbell R. Harvey of Duke University that was entitled “Bitcoin is big. But fedcoin is bigger.”  These days, there is an agenda behind virtually everything that the Washington Post publishes, and so it is not just a coincidence that they have published an article with “fedcoin” in the title.  Here is how that article begins…