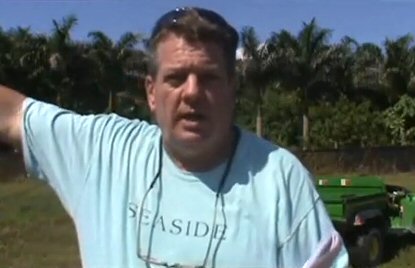 Bob Burton as seen in one of his YouTube.com videos that was not deleted.

JASPER, FLORIDA – Robert “Bob” Burton is a deadhead logger in the Florida panhandle.  In the course of his business, he stumbled upon some illegal activities carried out by the Florida Department of Environmental Protection (DEP), including state employees dumping toxic waste in Florida water reclamation areas.

On Friday, Hamilton County sheriff’s deputies and Florida Department of Law Enforcement (FDLE) agents, dressed in tactical gear and armed with assault rifles, served him with a search warrant.   Agents seized his computer, cell phone, and video camera.   However, Burton has not been charged with any crime.

He also reported that the DEP had seized a logger’s entire season harvest, even though the logger had the proper permits, and was violating no laws.  A judge later ruled that the logger in question had legally harvested the logs, valued at over $300,000, but the DEP has refused to return the logs.  He contends that public records regarding this case were intentionally destroyed.

Burton recorded a telephone conversation with Ryan Tyson, the Chief of Staff for State Senator Charles S. “Charlie” Dean, Sr.,  in which Tyson may have made incriminating statements regarding DEP activities.    Sen. Dean is the Chairman of the Senate Committee on Environmental Preservation and Conservation.   Burton published his conversation with Tyson, along with other evidence of corruption, on YouTube.com.

As of Friday evening, those videos have been deleted by YouTube.

All of that apparently led to deputies and FDLE agents in tactical gear with assault rifles paying him a terrifying visit.

On Friday, January 14 around 7:30 am, Burton got a knock on his door.  Standing there was a Hamilton County sheriff’s deputy and several heavily armed FDLE agents.  They presented a warrant.  Not an arrest warrant, but a warrant to seize Burton’s computer, video camera, cell phone, and documents.

No one was arrested — they just wanted the documents and recordings Burton had made of state officials engaged in what appears to be illegal activities.