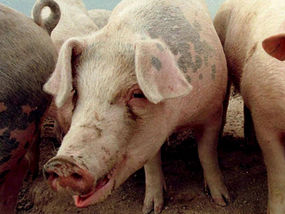 In a sign of bad economic times, more than 40,000 show up when a Weld family invites people to gather surplus produce.

Cars snaked around cornfields and parallel parked along Colorado 66 and 119 early in the morning to get free food from the Miller family, who farm 600 acres outside of Platteville, about 37 miles north of Denver.

As this prolonged Indian summer continued, the Millers had decided to give away produce because so much was left over at the end of their annual fall festival. Any day now, a few deep freezes would kill it off.

They expected between 5,000 and 10,000 people spread out over a couple of days. Instead, they found themselves on Saturday morning inundated with cars and people with sacks and wagons and barrels ready to harvest whatever was available.

Read moreWant one more palpable sign of a desperate economy? Down on the farm, a frenzy over free food

IF you’ve stood in line at a farmers’ market recently, you know that the local food movement is thriving, to the point that small farmers are having a tough time keeping up with the demand.But consumers who would like to be able to buy local fruits and vegetables not just at farmers’ markets, but also in the produce aisle of their supermarket, will be dismayed to learn that the federal government works deliberately and forcefully to prevent the local food movement from expanding. And the barriers that the United States Department of Agriculture has put in place will be extended when the farm bill that House and Senate negotiators are working on now goes into effect.

As a small organic vegetable producer in southern Minnesota, I know this because my efforts to expand production to meet regional demand have been severely hampered by the Agriculture Department’s commodity farm program. As I’ve looked into the politics behind those restrictions, I’ve come to understand that this is precisely the outcome that the program’s backers in California and Florida have in mind: they want to snuff out the local competition before it even gets started.