Back in April 2012, Zero Hedge pointed out something rather disturbing for the European banking sector and defenders of the European monetary myth: the “aggregate shortfall of required stable funding Is €2.78 trillion” which was the number estimated by the BIS’ Basel III rules needed to return to some semblance of balance sheet stability in Europe. More importantly, this was a number so big, it was obvious that there was only one way to deal with it: cover it up deeply under the rug and pray it never reemerged.

What happened next was inevitable: Basel III’s implementation was delayed as there was no way Europe’s banks could satisfy their deleveraging requirements, while the actual capital shortfall hole became bigger and bigger. Today, 16 months later, the FT discovers what Zero Hedge readers knew long ago in “Eurozone banks need to shed €3.2tn in assets to meet Basel III.” In other words, not only has Europe not fixed anything in the past year, but the liquidity tsunami injected by the central banks merely taped over the epic capital shortfall that just got epic-er, increasing from €2.8 trillion to €3.2 trillion, an increase of half a trillion to over $4 trillion in one short year.

Sadly, just like back in April 2012, so now, Europe has no hope of actually addressing this much needed deleveraging and so the can kicking will continue until the number rises to $5 trillion, $6, $7 etc until one day the market’s “head in the sand” strategy finally fails and every emperor around the world is found to be naked.

Europe’s biggest banks will have to cut €661bn of assets and generate €47bn of fresh capital over the next five years to comply with forthcoming regulations aimed at reducing the likelihood of another taxpayer funded bailout.

Read moreEurozone Funding Shortfall Rises To Over $4 Trillion, Increases By More Than $500 Billion In A Year

Submitted by Mark J. Grant, author of Out of the Box, Five Eurozone countries now have loans for half a trillion Euros.

These members of the Euro currency union are receiving loans from the one of two bailout funds which are financed by the other 12 Eurozone members. On top of that are the emergency loans from the International Monetary fund (IMF) and bilateral loans from the solvent countries to the bankrupt nations.

Optimism it seems is all that matters (or is all that is allowed) as we are battered by dismal data left, right, and center. Of course, a reflection on the markets tells any ‘smart’ person that it all must get better – or why would stocks or sovereigns, or EURUSD be where it is? However, the 6 out of 10 15-24 year olds in Greece (61.7% to be exact) would beg to differ with that view of the world (as their economy grinds to a halt) – and with Spain reaching new highs at 55.6% (as well as the Euro-zone over 24%), all the bureaucratic lip-service in the world won’t stop the revolt that is coming we fear. 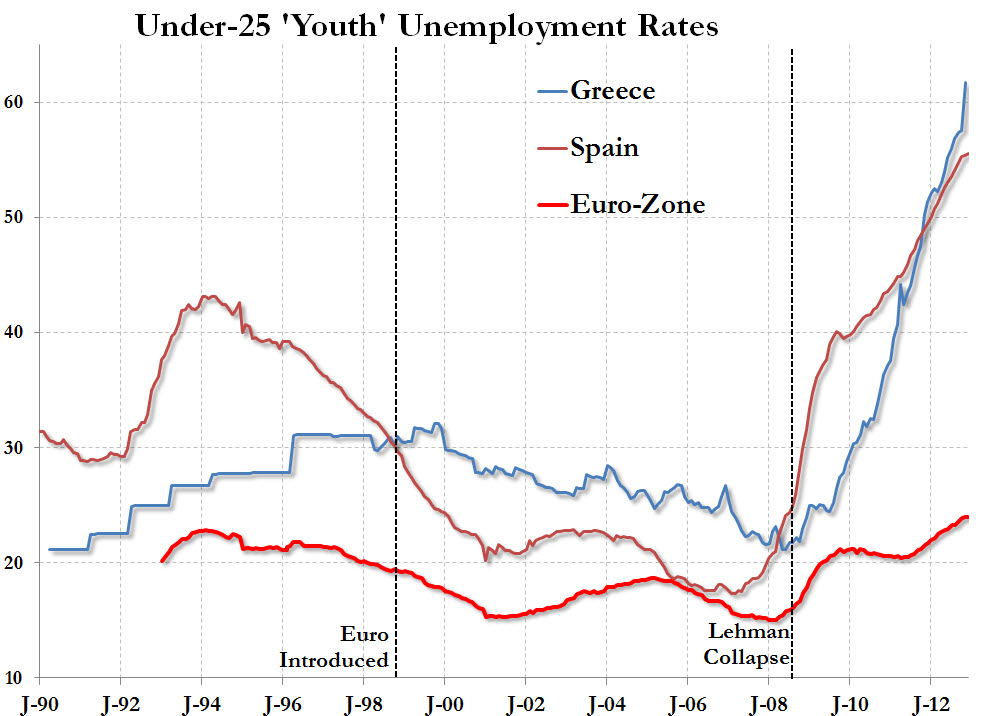 It was only a matter of time… Needless to say, this is obviously so wrong on so many levels, but what can you do. At this point the endgame is in play so at least we can all laugh about it.