For a brief period overnight, Ripple overtook Ethereum as the 2nd largest cryptocurrency (topping $71 billion in market cap) as the recent rotation from Bitcoin, Litecoin, and Ethereum into Ripple continued overnight.

– 3 Cryptocurrencies to Consider Buying Over Bitcoin:

There’s a good reason why Ethereum is the second-largest cryptocurrency by market cap: It has a really popular blockchain. Formed earlier this year, the Enterprise Ethereum Alliance is comprised of 200 organizations that are currently testing a version of Ethereum’s blockchain in demo, pilot, and small-scale projects. These testers include governments, financial-service companies (which are expected to be the biggest benefactor of blockchain technology), and tech and energy companies.

Another cryptocurrency that’s been very impressive of late is Ripple. Its token, the XRP, has galloped higher by more than 12,000% since the year began.

Sticking with the theme that blockchain is king, one under-the-radar cryptocurrency you should be following is Stellar (formerly Stellar Lumens), and its coin, the XLM. This is a virtual currency that holds true to its name, as the XLM has been “stellar” this year with a 10,400% year-to-date gain.

Despite all the hype surrounding bitcoin, there are virtual currencies that have seen an even more astounding rise in value. Rival cryptocurrency ethereum has just reached an all-time high, and is now up 8,000 percent this year.

The second-most valuable digital currency broke through the $500 and $600 price milestones before setting a new record of $707 at 17:20 GMT on Wednesday. It has been an amazing ride for ethereum, which began the year trading at $8.34.

Launched in 2015 by Canadian computer programmer Vitalik Buterin, ethereum’s market value is currently above $68 billion, according to Coinmarketcap.com.

One month ago, a chart from Convoy Investments went viral for showing that among all of the world’s most famous asset bubbles, bitcoin was only lagging the infamous 17th century “Tulip Mania.” 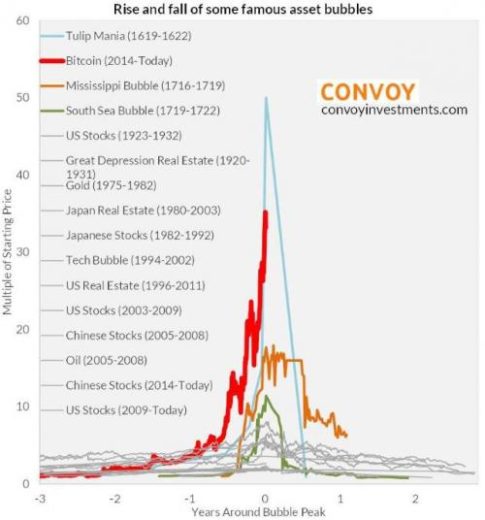 One month later, the price of bitcoin has exploded even higher, and so it is time to refresh where in the global bubble race bitcoin now stands, and also whether it has finally surpassed “Tulips.”

Conveniently, overnight the former Bridgewater analysts Howard Wang and Robert Wu who make up Convoy, released the answer in the form of an updated version of their asset bubble chart. In the new commentary, Wang writes that the Bitcoin prices have again more than doubled since the last update, and “its price has now gone up over 17 times this year, 64 times over the last three years and superseded that of the Dutch Tulip’s climb over the same time frame.”

That’s right: as of this moment it is official that bitcoin is now the biggest bubble in history, having surpassed the Tulip Mania of 1634-1637. 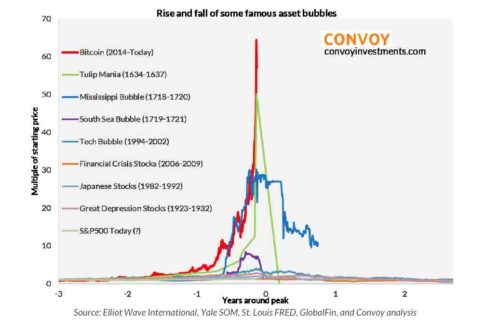 And with that we can say that crypto pioneer Mike Novogratz was right once again when he said that “This is going to be the biggest bubble of our lifetimes.” Which, of course, does not stop him from investing hundreds of millions in the space: when conceding that cryptos are the biggest bubble ever, “Novo” also said he expects bitcoin to hit $40,000 and ethereum to triple to $1,500.

– Ethereum Soars Above $600 – Bigger Than GM, As Crypto-Mania Spreads

– JPMorgan Has Some Bad News For Bitcoin Bears:

If JPMorgan is right, the implications are staggering:  contrary to expectations that bitcoin’s market cap is a rough reflection of its inflows, JPM’s calculations reveal that a mere $6 billion in net inflows since 2009 has resulted in a market cap of $330 billion. This goes to what Mike Novogratz said last week when he said that cryptos are unique, because unlike all other asset classes, there is no corresponding increase in supply when prices surge.

This also means that as new capital flows into the crypto space as more retail and institutional investors scramble for “a piece of the pie”, the potential market cap gains are unprecedented.

Putting this number in context, so far in 2017, there has been $283BN in global equity inflows ($402BN in ETF inflows and $120BN in mutual fund outflows), and $346BN in bond inflows, as this BofA table reveals:

If only a fraction of these institutional and retail flows were redirected toward bitcoin, then the next, and even more parabolic leg higher would be upon us, inviting even more bubble comparisons, even more skeptics and even more converts… just like none other than Jamie Dimon humself. In other words, shorts, beware, especially now that shorting – and short squeezes – is about to get much easier thanks to bitcoin futures.

Update: Bitcoin and Ethereum are holding at the lows of the day, but following ECB comments earlier (see below), The Fed’s vice chariman of supervision, Randy Quarles, warns that digital currencies like bitcoin pose “serious financial stability issues” as they grow…

Today, the vast majority of our payments by volume and value are processed by regulated financial institutions. In the U.S. payment system, digital currencies are a niche product that sometimes garners large headlines.

While these digital currencies may not pose major concerns at their current levels of use, more serious financial stability issues may result if they achieve wide-scale usage.

Perhaps most ironic is Quarles’ description of the ‘drawbacks’ of cryptocurrencies…

But from the standpoint of analysis, the “currency” or asset at the center of some of these systems is not backed by other secure assets, has no intrinsic value, is not the liability of a regulated banking institution, and in leading cases, is not the liability of any institution at all. Indeed, how to treat and define this new asset is complicated.

So because it’s not backed by ‘other secure assets’ – analysing its value is complicated… like the dollar.

It’s a bloodbath in cryptocurrency markets this morning… 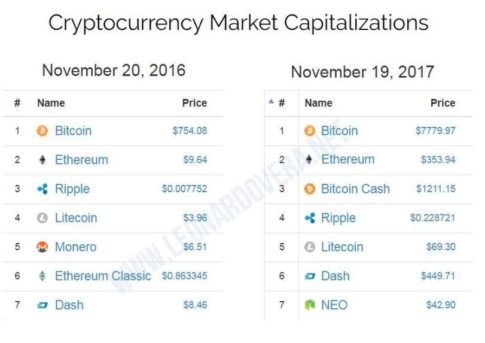