The threat of global warming is so great that campaigners were justified in causing more than £35,000 worth of damage to a coal-fired power station, a jury decided yesterday. In a verdict that will have shocked ministers and energy companies the jury at Maidstone Crown Court cleared six Greenpeace activists of criminal damage.

Jurors accepted defence arguments that the six had a “lawful excuse” to damage property at Kingsnorth power station in Kent to prevent even greater damage caused by climate change. The defence of “lawful excuse” under the Criminal Damage Act 1971 allows damage to be caused to property to prevent even greater damage – such as breaking down the door of a burning house to tackle a fire.

The not-guilty verdict, delivered after two days and greeted with cheers in the courtroom, raises the stakes for the most pressing issue on Britain’s green agenda and could encourage further direct action.

Separate earthquakes hit off the coasts of northern Japan and Indonesia, but neither ultimately produced damaging waves and there were no reports of damage or casualties.

The most powerful tremor, with a preliminary magnitude of 7.0, hit off the coast of Hokkaido, Japan at a depth of 12 miles at 9.21am local time. 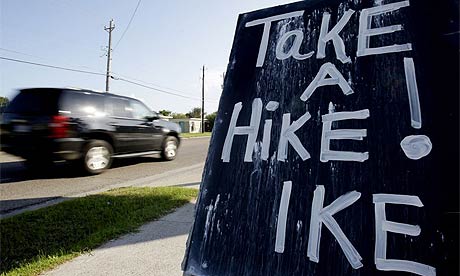 More than a million people in Texas have been warned they should leave their homes as hurricane Ike heads across the Gulf of Mexico towards the Texan coast, home to America’s largest concentration of refineries and chemical plants.

Tens of thousands of people fled coastal areas of Texas on Wednesday after Hurricane Ike spun off Cuba, roared into the Gulf of Mexico and headed toward the state with growing strength.

After pummeling Haiti, Cuba and other parts of the Caribbean, Ike refueled in the Gulf of Mexico and headed toward landfall near Corpus Christi, where it is expected to hit early Saturday as a Category 4 hurricane with winds exceeding speeds of 131 miles per hour.

At 2 p.m., Ike’s eye had moved back over water off Cuba’s southern coast. Ike was a Category 2 hurricane, with steady 100-mph (160-kph) winds and higher gusts, according to the National Hurricane Center in Miami, Florida.

Ike’s eye is expected to move back over Cuba on Tuesday, then move into the Gulf of Mexico and grow again in intensity.

MIAMI, Florida (CNN) — Hurricane Ike moved past the southern Bahamas on Sunday, carrying high winds and heavy rain as the Category 4 storm surged forward on a track that could take it toward the U.S. Gulf Coast.

Obenson Etienne walks to his house Sunday in Providenciales, one of the isles in the Turks and Caicos.

The possibility prompted state and local officials in Florida and Louisiana to prepare for what may be the third major storm to affect the Gulf Coast in less than a month.

“Let’s hope it’s all a false alarm,” Louisiana Gov. Bobby Jindal said Sunday as he pre-emptively issued a state of emergency. His state is still recovering from Hurricane Gustav; more than 370,000 people there are still without power, nearly a week after Gustav made landfall, he said.

“There continues to be much uncertainty about the predicted track,” he said of Ike.

On Sunday, President Bush declared a state of emergency in Florida. The hurricane’s outer bands could start affecting the Florida Keys by Monday afternoon. 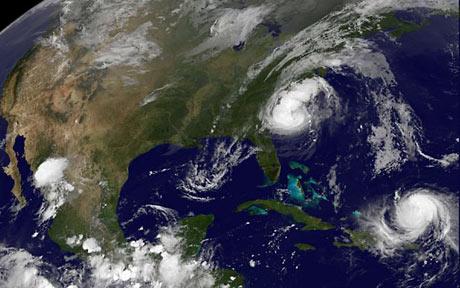