No one is sure how to safely dispose of millions of gallons of highly radioactive water at the Fukushima Daiichi nuclear plant. ‘There is nothing like this, on this scale, that we have ever attempted to do before,’ a U.S. expert says.

Tokyo Electric Power Co.’s Fukushima Daiichi Nuclear Power Plant’s No.1, No.2, No.3 and No.4 reactors, from right to left, in this photo taken March 31 and released by Japan’s Defense Ministry on April 1.
Reporting from Tokyo and Los Angeles—For nearly four weeks, Japanese emergency crews have been spraying water on the damaged Fukushima Daiichi nuclear reactors, a desperate attempt to avert the calamity of a full meltdown.

Now, that improvised solution to one nuclear nightmare is spawning another: what to do with the millions of gallons of water that has become highly radioactive as it washes through the plant.

The water being used to try to cool the reactors and the dangerous spent fuel rods is leaking through fissures inside the plant, seeping down through tunnels and passageways to the lowest levels, where it is accumulating into a sea of lethal waste.

No one is sure how to get rid of it safely.

“There is nothing like this, on this scale, that we have ever attempted to do before,” says Robert Alvarez, a former assistant secretary of the U.S. Energy Department.

Japanese officials estimate that they already have accumulated about 15 million gallons of highly radioactive water. Hundreds of thousands of gallons are being added every day as the plant’s operator, the Tokyo Electric Power Co., continues to feed coolant into the leaky structures.

Ultimately, the high-level radioactive substances in the water will have to be safely stored, processed and solidified, a job that experts say will almost certainly have to be handled on a specially designed industrial complex. The process of cleaning up the water could take many years, even decades, to complete. The cost could run into the tens of billions of dollars.

NEW YORK — Stocks fell Thursday after a 7.4-magnitude earthquake struck off the coast of northern Japan. The losses moderated slightly after a tsunami warning was lifted.

The Dow Jones industrial average fell as many as 96 points in morning trading before recovering some of its losses. Japan’s stock market had already closed by the time the earthquake struck.

The quake rattled investors, partly since it struck near the same area as the massive earthquake that triggered devastating tsunami on March 11. Stock indexes pared their losses after the impact of the latest quake appeared to be less than initially feared.

ES just took a big leg lower. It is unclear if this is due to breaking news of a new 7.4 earthquake hitting Tokyo and a subsequent Tsunami alert.

Then again, there may be no reason whatsoever: this is a self-aware SkyNet after all. Follow the latest developments on NHK here. 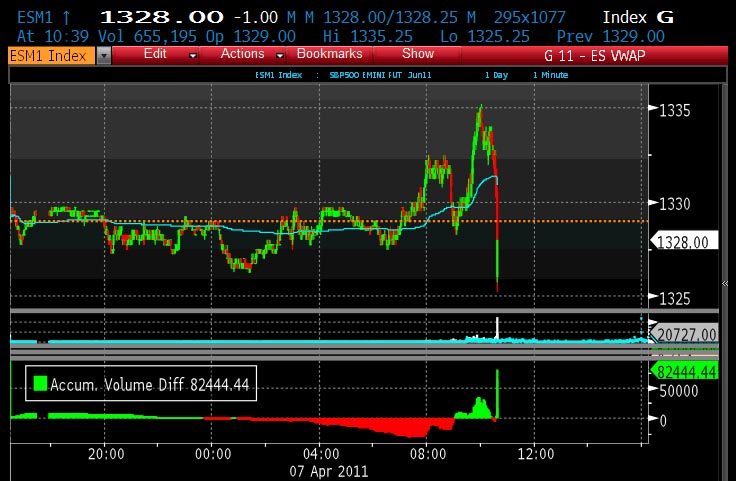 And location of the Earthquake: 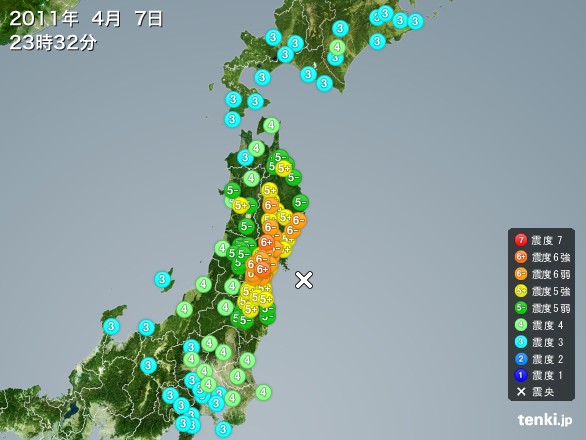 MANILA–Fruits and herbs can help combat the effects of radiation, a doctor said Wednesday.

Dr. Romeo Quijano of the Department of Pharmacology and Toxicology at UP Manila told the Senate committee on health that eating uncontaminated fruits and vegetables high in anti-oxidants can help people who have been exposed to radiation. These include berries, guavas, guyabanos, and soy beans.

The senate committee hearing was called to address concern that radiation from the Fukushima nuclear plant in Japan.

“Fukushima is really a big problem,” Quijano said, adding that the effects may be worse than those suffered in the 1986 Chernobyl nuclear emergency.

He said the International Atomic Energy Agency puts radiation released by the Chernobyl accident at around 50 million curies. Figures from the Union of Concerned Scientists put the figure at up to 9 billion curies. Fallout from that incident spread throughout the world.

And again the propaganda kicks in that those radiation levels are minute and safe.

I told you several times before that a radioactive particle inhaled or ingested becomes 1 billion times worse than outside your body.

There are no safe limits!

Yet, nobody seems to care about American schoolchildren: 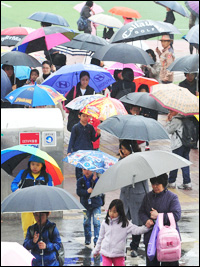 Parents have their children use umbrellas on their way home from school at Shinyongsan Elementary School, central Seoul, Thursday, amid fear of “radioactive rain.” The authorities said the amount of radioactive material in the rain was negligible.

From parents of kindergartners to office workers, the entire nation was gripped by concerns over “radioactive rain,” Thursday, when traces of radioactive material were detected in rainwater on Jeju Island.

The authorities went all out to allay public fears, but the detection, albeit minuscule, made people nervous as they braced themselves for rainfall nationwide. They went to schools and offices armed with umbrellas, raincoats and boots.

The Korea Institute of Nuclear Safety (KINS) said radioactive iodine and cesium were found in rainwater collected in the early morning at a checkpoint on the island. The concentration level of iodine-131 was 2.02 becquerels per liter (Bq/l), that of cesium-137, 0.538 Bq/l, and that of cesium-134, 0.333 Bq/l.

KINS officials said the levels were too low ― almost negligible ― to pose any serious health risks. “Even if a person drinks 2 liters of such rainwater every day for a year, the exposure concentration level will be 0.037 millisievert (mSv), far lower than the 1 mSv government safety standard,” a KINS official said.

An earlier article considered whether Haiti’s January 2010 quake was engineered. Despite no corroborating proof, technologies exist to do it. More information below.

On March 11 at 14.46 JST, the earth shook around 81 miles east of Japan’s Oshika Peninsula of Tohoku near Sendai, its hypocenter about a 20 mile depth. Measured at 9.0, it triggered a 33-foot high tsunami in minutes, compounding the destructive damage over a wide area.

Of greatest concern is damage to four or more nuclear reactors at Tokyo Electric’s (TEPCO) Fukushima Daiichi plant. So far (besides many thousands injured and homeless), those dead or missing number almost 30,000, a total to rise exponentially if the worst Fukushima’s fears materialize.

According to some experts, it’s no longer speculation. It’s reality, though government and media reports deny it, concealing the disaster’s magnitude, affecting the entire Pacific rim and Northern Hemisphere.

Plutonium traces in soil and increasing hazards for plant workers “forced government officials to confront the reality that the emergency measures they have taken to” contain the disaster haven’t worked. In fact, conditions are worse, not better, suggesting perhaps nothing can contain this monster, threatening to make northern Japan (the size of Pennsylvania) an uninhabitable dead zone, though it’s still too early to tell.

“The radioactive core in a reactor at the crippled Fukushima nuclear power plant appears to have melted through the bottom of its containment vessel (onto) a concrete floor, experts say, raising fears of a major release of radiation at the site.” It’s already major and increasing.

“The indications we have, from the reactor to radiation readings and the materials they are seeing, suggest that the core has melted through the bottom of the pressure vessel in unit two, and at least some of it is down on the floor of the drywell. I hope I am wrong, but that is certainly what the evidence is pointing towards.”

“The reason we are concerned is that they are detecting water outside the containment area that is highly radioactive and it can only have come from the reactor core.” Lahey added that it won’t be as bad as Chernobyl. In fact, it’s multiples worse from:

— spreading them catastrophically across the entire Northern Hemisphere, especially over wide parts of Japan;

According to Dr. Tom Burnett:

“Fukushima is going to dwarf Chernobyl. (Its) reactions are getting worse. I suspect three nuclear piles are in meltdown….When the molten mass (reaches) the water table, (it) will explode (releasing) more radioactive particulate matter. The concrete will melt and the problem will get worse.”

It’ll continue for months. The only solution is bad; namely, “detonat(ing) a 10 kiloton fission device inside each reactor containment vessel and hope to vaporize the cores.”

Nuclear core meltdowns are self-sustaining. Only halting the reaction can stop them. That “require(s) a nuclear weapon….in each containment vessel….(b)ut it will be messy.”

The operator of the disaster-stricken Fukushima Daiichi nuclear power plant has detected 5 million times higher than the legal limit of radioactive iodine in seawater around the plant.

Tokyo Electric Power Company says it detected 300,000 bequerels of iodine-131 per 1 cubic centimeter, or 7.5 million times higher than the legal limit in samples taken around the water intake of the No. 2 reactor at 11:50 AM on Saturday.

It also found 200,000 bequerels or 5 million times higher than the limit in samples taken at 9AM on Monday. 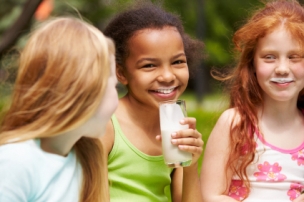