What does it take for the Spanish “first amendment” journalistic override to kick in? Apparently, in the case of local media leader El Pais, putting up the following in print: “Merkel, como Hitler, ha declarado la guerra al resto del continente, ahora para garantizarse su espacio vital económico.” For the Spanish-challeneged this translates as follows: “Merkel, like Hitler, has declared war on the rest of the continent now to secure their economic living space.” Ah yes, the touchy verboten topic of German “Lebensraum” – its invocation, and ostensibly the unflattering Merkel comparison (seen so often in Greece) were enough to get the article by Juan Torres López in the Andalusia version of El Pais titled simply enough “Alemania contra Europa” taken down.Is it perhaps because unlike in Greece, where articles like that are a daily occurrence, Spaniards still have something to lose should they also lose the good graces of the German chancellor? Something that is more than one Spiderman towel per depositor in the nation’s just as insolvent banking system, where apparently unlike in Cyprus, the ESM actually does work to preserve liquidity and stability?…

A cached version of the article: 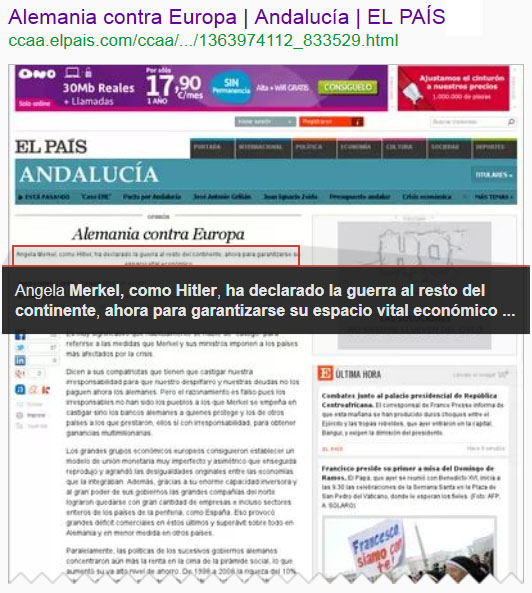 In its place one only now sees the following: