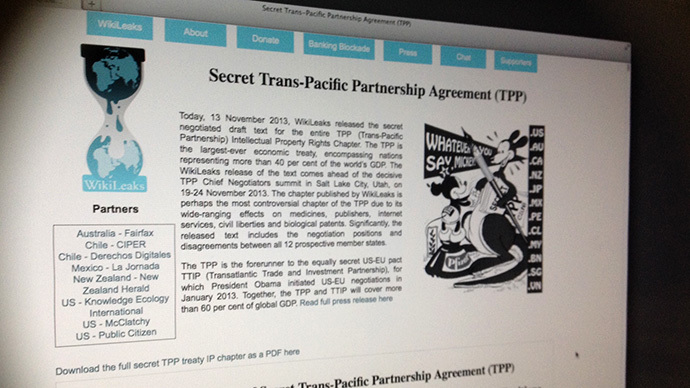 Details of a highly secretive, multi-national trade agreement long in works has been published by WikiLeaks, and critics say there will be major repercussions for much of the modern world if its approved in this incarnation.

The anti-secrecy group published on Wednesday a 95-page excerpt taken from a recent draft of the Trans-Pacific Partnership, or TPP, a NAFTA-like agreement that is expected to encompass nations representing more than 40 percent of the world’s gross domestic product when it is finally approved: the United States, Japan, Mexico, Canada, Australia, Malaysia, Chile, Singapore, Peru, Vietnam, New Zealand and Brunei.

Today, 13 November 2013, WikiLeaks released the secret negotiated draft text for the entire TPP (Trans-Pacific Partnership) Intellectual Property Rights Chapter. The TPP is the largest-ever economic treaty, encompassing nations representing more than 40 per cent of the world’s GDP. The WikiLeaks release of the text comes ahead of the decisive TPP Chief Negotiators summit in Salt Lake City, Utah, on 19-24 November 2013. The chapter published by WikiLeaks is perhaps the most controversial chapter of the TPP due to its wide-ranging effects on medicines, publishers, internet services, civil liberties and biological patents. Significantly, the released text includes the negotiation positions and disagreements between all 12 prospective member states.

The TPP is the forerunner to the equally secret US-EU pact TTIP (Transatlantic Trade and Investment Partnership), for which President Obama initiated US-EU negotiations in January 2013. Together, the TPP and TTIP will cover more than 60 per cent of global GDP. Read full press release here.