– East Ukraine Votes For Independence: Turnout Reported “Off The Charts” (ZeroHedge, May 11, 2014):

The most significant geopolitical event of the day is the east Ukraine independence referendum taking place in various cities across the region, less than two months after the Crimean case study which saw the region split away from Ukraine and join Russia, despite the fervent warnings by Kiev and the west that the result of the “rigged election” would not be accepted by anyone. As it turned out then, it only needed to be accepted by Russia which promptly took over the Black Sea territory.

Today’s vote is a carbon copy of what happened in Crimea, with the locals almost certain to vote in Independence from Kiev (even over Putin’s “objections” who has managed to distance himself from the vote if quite willingly will accept its outcome), followed by another vote that annexes east Ukraine (and subsequently Transnistria) to Russia which may be held as soon as May 18, promptly followed by the adoption of the Ruble as the regional currency.

Read moreEast Ukraine Votes For Independence: ‘The Turnout Is Not Just High, It’s Off The Charts’

Despite denouncements from the West (how did that work out in Crimea?) and diplomatic calls for postponement from Putin, tomorrow appears to be setting up for the next crucial catalyst in the ever-escalating civil (and not so civil) war in Ukraine. As RIA reports, Referendum organizers printed about 1.7 million ballots and on the day of voting in the region there will be more than 1,600 polling stations. The referendum will ask voters to answer the simple question: “Do you support the act of state independence of the People’s Republic of Luhansk.” and will take place from 8am to 8pm local time. Organizers claim that “the willingness to vote is almost total,” which makes the decision of the People’s Mayor that “after the referendum… gradually, we will move to the Russian ruble,” even more economically significant for the IMF-supported nation.

The referendum poll is happening:

Read moreUkraine: Donetsk Region May Shift To Rubles After 1.7 Million Vote In Referendum

Hours ahead of Donetsk’ planned referendum this weekend, Russia’s President Vladimir Putin – speaking from a recently reclaimed Sevastopol (and denounced for being their by Ukraine’s acting government) – has made anything but the market’s much-needed diplomatic comments…

In other words, while he publicly asked for the referendum to be postponed; the people are demanding it and he will live by their will… and if they choose independence, he will enforce it. On a day when 20 have already died in clashes, is it any wonder event risk concerns this weekend are surging.

Ukraine is not happy about his visit…

Yesterday we correctly predicted that while the world is distracted by this and that, the next real short-term catalyst is the east Ukraine referendum vote on Sunday, whose results would be available as soon as May 11, indicating that, almost with 100% certainty, the Ukraine region would vote to become independent. 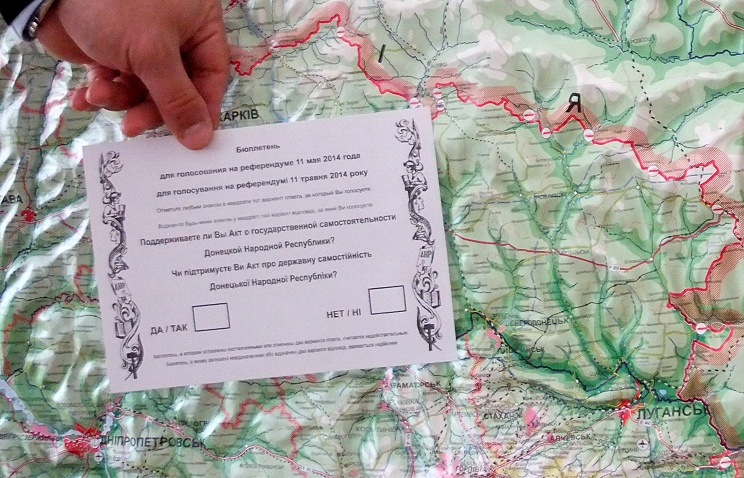 This was promptly followed by a skillful diplomatic gambit by Putin who, knowing full well Donetsk would just say no, suggested the referendum be postponed thus giving himself cover when the western press attacked him for using Crimean tactics for the second time in two months. This was confirmed this morning when the Donetsk “separatists” indeed politely thanked Putin for his concern, but decided to proceed with this weekend’s referendum anyway.

The irony is that as we also explained yesterday, the Crimea scenario is fully in play once more. Confirming precisely that was news from News of Donbass which reported moments ago that in the aftermath of the new certain May 11 referendum, a week later east Ukraine will formalize the Russia annexation process and on May 18 there will be a “second round of the referendum where you will be asked to support accession to the Donestk region of Russia.”

Andriy Parubiy, the National Security and Defense Council boss of the junta in Kyiv, announced on Sunday the Ukrainian military will expand the “active stage of the operation in towns where extremists and terrorists are carrying out illegal activities.”

The renewed effort to assert control and defeat anti-junta activists and paramilitaries in Donetsk, Sloviansk, Kramatorsk, Kostyantynivk and other towns in eastern Ukraine coincides with news the CIA and FBI will work with the regime to put down popular uprisings against the government in Kyiv.

On Monday, coup Interior Minister Arsen Avakov said the failure of police in Odessa, where violence claimed the lives of dozens of people over the last few days, has resulted in the formation of “Kiev-1,” a paramilitary comprised of “civil activists” who previously worked with the fascist Right Sector and Svoboda to overthrow Ukraine’s elected president in February.

National Security and Defense Council boss Parubiy was the founder of the Social National Party of Ukraine, a fascist political party fashioned after the Nazis. It became Svoboda, a nationalist party led by Oleh Tyahnybok, a prominent member of the Verkhovna Rada, the Ukrainian Parliament.

– Caught On Tape: Another Ukraine Helicopter Shot Down (ZeroHedge, May 5, 2014):

Just 2 days after the first Ukrainian military helicopter was shot down, Ukraine’s defense ministry confirms an Mi-24 chopper was shot down in the eastern region of Donetsk. As the following clip shows, it appears the helicopter came under large-caliber machine gun fire, a flash is seen, and then the chopper falls from view. The Defense Ministry confirms the pilots survived as the chopped crashed into a nearby river. One wonders how many more helicopters (that are in working condition and still have a full gas tank) Kiev, i) has; and ii) can afford to lose to eastern separatists as the Ukraine conflicts becomes an all out civil war?

Ukraine’s National Guard is reportedly storming the eastern town of Kramatorsk. Meanwhile, the army has resumed its special operation in Slavyansk, where two soldiers have been killed.

“The assault is starting now,” a Kramatorsk self-defense activist has told RIA Novosti by phone. Another activist told the news agency that the National Guard opened fire on self-defense forces. 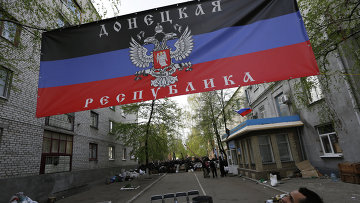 As we showed in the map earlier, the spread of pro-Russian-held cities is rapid across eastern Ukraine and it seems things are reaching a very dangerous head very quickly. As RIA reports, the Central Election Commission of the “Donetsk People’s Republic” has agreed to hold a referendum (covering 55 territorial election commissions, more than two thousand polling stations, and more than two million ballots) on May 11th. Citizens will answer one simple question, “Do you support the act of the proclamation of independence of the Donetsk State People’s Republic?” As RIA adds, leadership have stated that region of Donetsk will not vote in the May 25 presidential election in Ukraine if the majority of residents support independence.

– Presenting Russian East Ukraine: These Are The Cities Controlled By “Separatists” (ZeroHedge, April 30, 2014):

Vladimir Putin ‘confirmed’ yesterday that there were no Russian forces ‘boots on the ground’ in Ukraine and so it seems the daily growing list of cities that are falling to pro-Russian separatist forces throughout Eastern Ukraine – as the following chart shows – suggests an ever more divided nation is verging on civil war, despite the best efforts of the West to sanction their way to a fix. As Turchinov warned this morning, there is “real danger of the Russian Federation beginning a land war against Ukraine… our armed forces are on full military readiness.” 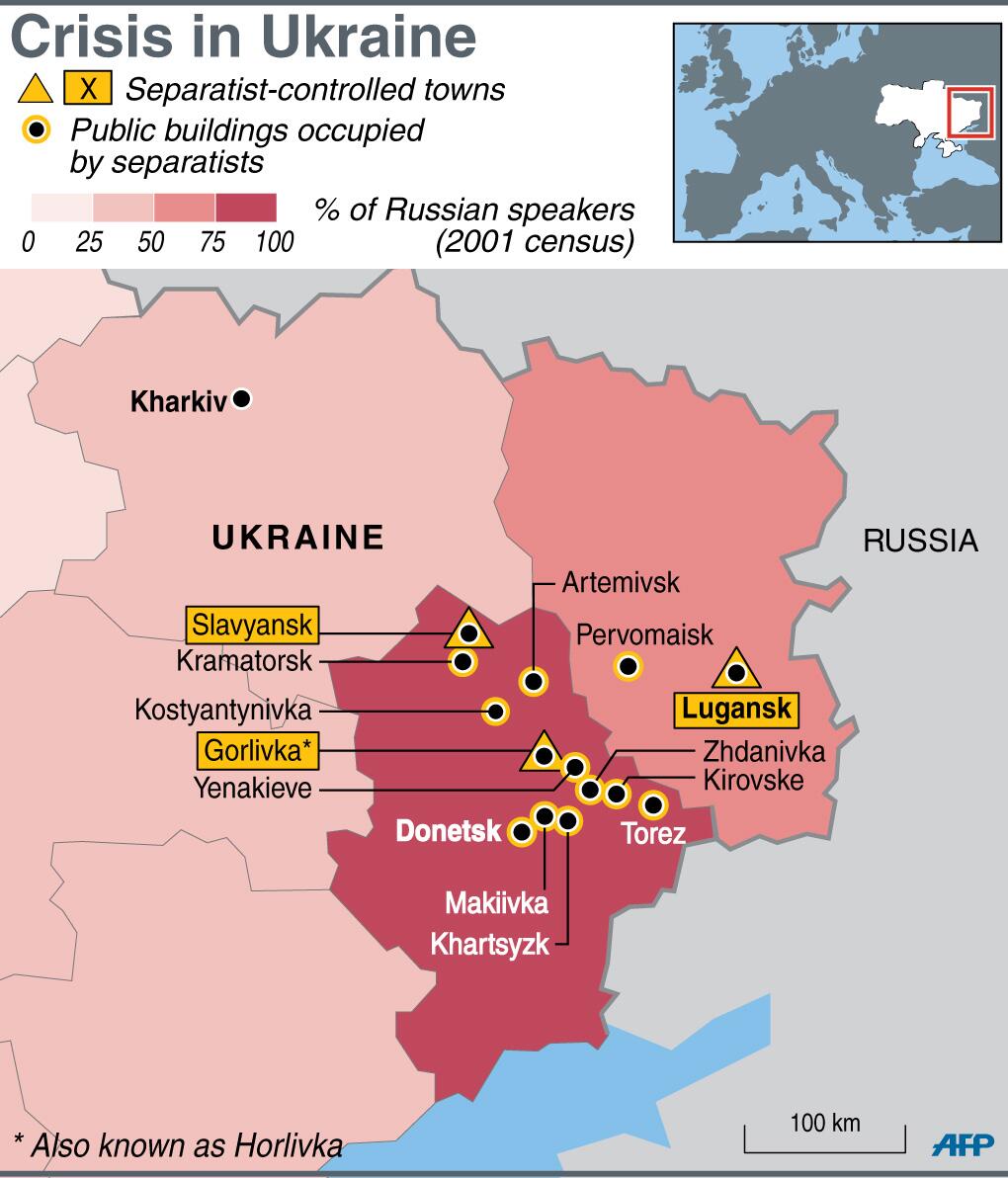 Read morePresenting Russian East Ukraine: These Are The Cities Controlled By “Separatists”

It seems the US and EU sanctions escalation has done nothing to calm the tensions between Ukrainians and pro-Russian forces in Donetsk, where according to report ultranationalists from Kiev are involved in a skirmish with local riot police. As the following clip suggests… “rocks and missiles are being thrown from both sides – there are injuries and scenes of absolute brutality as both sides clash.”

There are injuries, and scenes of absolute brutality as both sides clash with each other here in #Donetsk pic.twitter.com/EvGYZOf6M8

Not as simple in #Donetsk as ‘pro-Russia’ attacked. There were members on both sides here looking for a fight. That’s Ukraine right now. 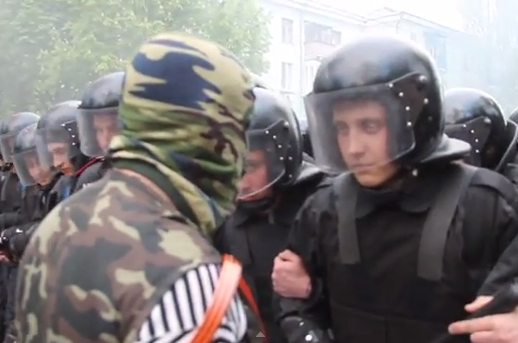 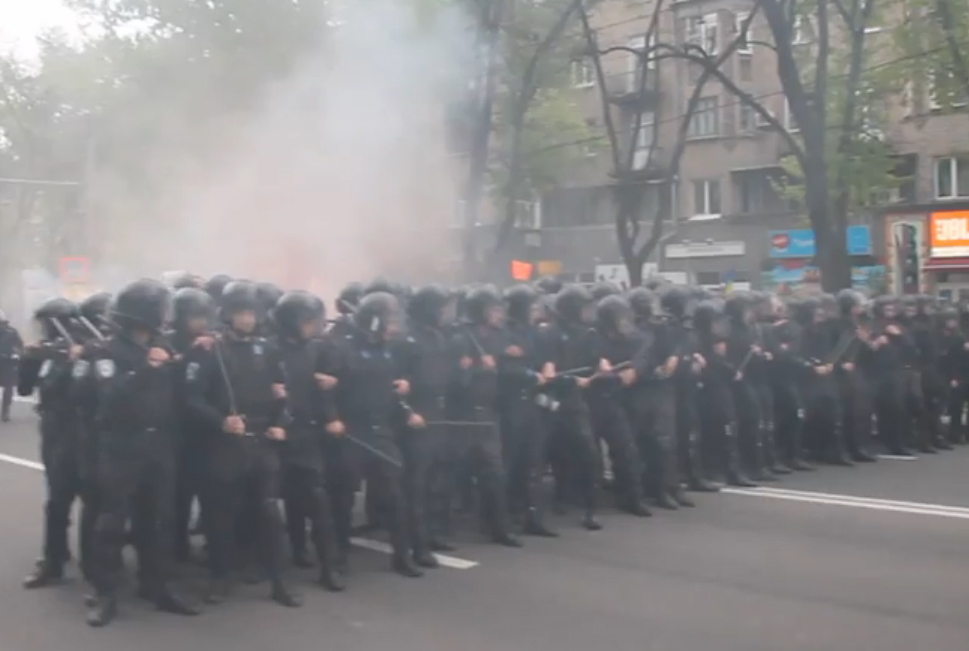 Minutes before the violence erupted…