As we reported earlier, Bitcoin brushed off the weekend sell-off and blasted above the $14,000 level as the Asian trading session got underway. There was no news to catalyse the move higher, although excitement and debate over the upcoming launch of Bitcoin futures on 10 December continues. One Bitcoin-related story did peak our interest, however.

It might be a sign that Bitcoin is becoming mainstream when blackmailers are prepared to accept the cryptocurrency as payment.

German tabloid, Bild, is reporting that this has befallen logistics company, Deutsche Post DHL. However, the recipients of two deliveries containing explosive devices had a lucky escape, as Bloomberg explains. 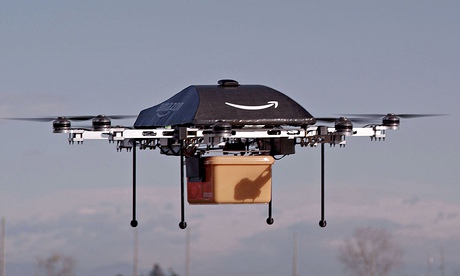 The Prime Air unmanned aircraft that Amazon is working on that could deliver packages in 30 minutes or less. Photograph: Rex Features

Amazon is planning to test drones in Cambridge, England, as the battle to offer consumers same-day deliveries heats up.

The US company announced with considerable fanfare late last year that it was considering using drones as a way of dramatically reducing the time it takes to deliver orders to customers. At the time there was speculation that the move was little more than a publicity stunt. But Amazon said in July that it had sought permission from the US Federal Aviation Administration to test drones that could fly as fast as 50 miles per hour for up to 30 minutes at a time to deliver packages weighing up to 2.3kg (5lb).