HEAVY FIRE POWER WAS USED IN FALLUJAH IN 2004: U.S. Marines fire Nov. 11, 2004, on Fallujah with a 155 mm Howitzer. One of the weapons originally designed for this artillery piece was a tactical nuclear weapon (that could include a neutron warhead) designed by Samuel Cohen, to be fired in eastern Europe on Soviet troops during President Ronald Reagan’s term in office. [Photo: Lance Cpl. Samantha L. Jones] 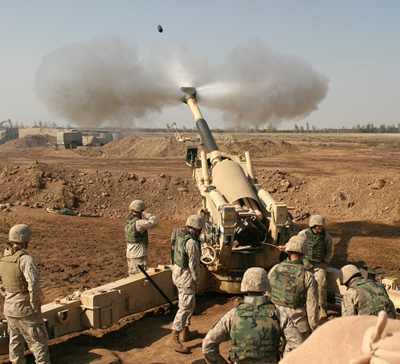 Heavy firepower was used in Fallujah in 2004

On Friday, 28 October 2011, it was my honor to host Leuren Moret and Christopher Busby as my guests on “The Real Deal”, an internet radio program broadcast on M/W/F from 5-7 PM/CT over revereradio.net. Leuren Moret is an independent geoscientist who has done expert studies on the Fukushima disaster, radiation problems around the world including depleted uranium. Dr. Christopher Busby is a visiting biomedical studies professor at the University of Ulster and is the co-author of reports about the effects of depleteed uranium in Iraq especially in relation to Fallujah. What Busby found much to his surprise was not DU but enriched uranium instead.

The interview was extraordinary on many counts. During the first hour, Leuren reported on the lastest research about Fukushima and laid out a background for understanding the issues that she and Busby and I would discuss during the second hour. It has become apparent from Busby’s research that a new kind of bomb–which seems to be a neutron bomb–has been used in Fallujah, but also in other areas, including Lebanon. As though that discovery were not astonishing enough, listening to him, it struck me that this same weapon may have been used to destroy the Twin Towers, an explanation for which has remained elusive and where alternative theories about the possible use of mini-nukes, directed energy weaponry, and other causal mechanisms have been widely discussed–or, in some cases, actually suppressed.

So there are linkages of evidence and causation that tie together the commission of war crimes in Iraq with mechanisms of destruction that may have brought about the near-total conversion of two massive, 500,000 ton buildings into millions of cubic yards of very fine dust. We know that nanothermite does not have the capacity to bring about these effects, even though it has many staunch advocates. So what we have to learn from Christopher Busby may not only expose the existence of a new weapon of mass destruction but also provide a key to understanding what happened on 9/11. The transcription of the second hour of the program (published here) was done by Jeannon Kralj, to whom we are indebted for the excellence of her work. The images and captions were courtesy of Leuren Moret. I plan to have the first hour published tomorrow and will provide a link to the audio file as soon as it becomes available, which it has just become.

Jim Fetzer: This is Jim Fetzer, your host on “The Real Deal”, continuing my conversation with Leuren Moret and now we have been joined by Professor Christopher Busby who is a visiting biomedical studies professor at the University of Ulster and is the co-author of reports about the effects of depleteed uranium in Iraq especially in relation to Fallujah.

Chris, welcome to “The Real Deal”.