Adam Cohen, a lawyer, is a former TIME writer and a former member of the New York Times editorial board.

Government agents can sneak onto your property in the middle of the night, put a GPS device on the bottom of your car and keep track of everywhere you go. This doesn’t violate your Fourth Amendment rights, because you do not have any reasonable expectation of privacy in your own driveway – and no reasonable expectation that the government isn’t tracking your movements.

That is the bizarre – and scary – rule that now applies in California and eight other Western states. The U.S. Court of Appeals for the Ninth Circuit, which covers this vast jurisdiction, recently decided the government can monitor you in this way virtually anytime it wants – with no need for a search warrant. (See a TIME photoessay on Cannabis Culture.)

It is a dangerous decision – one that, as the dissenting judges warned, could turn America into the sort of totalitarian state imagined by George Orwell. It is particularly offensive because the judges added insult to injury with some shocking class bias: the little personal privacy that still exists, the court suggested, should belong mainly to the rich.

Industrial hemp can be grown with a small amount of fertilizer and without pesticides
that pollute the environment and cause serious damage to your health. 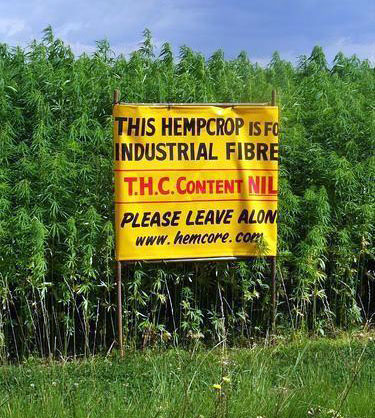 (NaturalNews) You can buy hemp products in America, including textiles, nutritional supplements, soaps and ropes. You just can’t grow hemp in America. So all the hemp used in these products purchased by Americans is grown somewhere else: China, Canada, India, Chile and many other countries. Meanwhile, Americans farmers suffer under increasing debt and decreasing revenues from stalled crop prices. What’s wrong with this picture?

What’s wrong, it turns out, is that the U.S. Drug Enforcement Agency (DEA) makes no differentiation between industrial hemp and marijuana. To the DEA, it’s all the same crop (never mind that smoking industrial hemp will only make you vomit, not high) and anyone caught planting hemp will be arrested and prosecuted using the same laws that were really only intended to halt hard-core street drug pushers.

As anyone who isn’t smoking crack has already figured out (and even a few who are), America’s drug policy is a scandalous failure. Not only has the so-called “War on Drugs” utterly failed to stop the flow of recreational drugs in America, it has criminalized struggling farmers who seek to grow industrial hemp as a profitable, renewable crop that’s in high demand across multiple industries.

The War on Drugs has accomplished one thing, though: It has filled the nation’s prisons with small-time “offenders” who got caught with an ounce or two of weed in their pockets. America’s drug policy, it seems, is a boon for the prison industry, but a curse upon our nation’s farmers.

Evidence has emerged that the Texan who bankrolled English cricket may have been a US government informer.

Sir Allen Stanford, who is accused of bank fraud, is the subject of an investigation by the BBC’s Panorama.

Sources told Panorama that if he was a paid anti-drug agency informer, that could explain why a 2006 probe into his financial dealings was quietly dropped.

Sir Allen vigorously denies allegations of financial wrongdoing, despite a massive shortfall in his bank’s assets.

Related information:
– Kucinich: Who Told SEC to “Stand Down” on Stanford Probe?
– US authorities had been investigating Allen Stanford for 15 years! (Times)
– FBI tracks down Texas financier in $8 billion fraud case (AP):
Stanford is not under arrest and is not in custody.
– Past probes sought to tie Stanford to drugs (Houston Chronicle)
– Former Assistant Secretary of Housing: The U.S. is the Global Leader in Illegal Money Laundering

But the British receiver of his failed Stanford International Bank – based in Antigua – told Panorama that the books clearly show the deficit.

The $6.7bn (£4.4bn) black hole in Sir Allen’s off-shore bank affects 28,000 depositors – 200 of whom are British, who have collectively lost $80m (£53m) – and raises serious questions for the British Foreign Office and the American authorities.

Secret documents seen by Panorama show both governments knew in 1990 that the Texan was a former bankrupt and his first bank was suspected of involvement with Latin American money-launderers.

Read moreBBC: Allen Stanford may have been a US government informer

MINNEAPOLIS (AP) – In a frustrating quirk in government policy, the most tightly controlled drugs – like painkilling narcotics prone to abuse – are the ones that most often elude environmental regulation when they become waste.

Many would like to send controlled substances to landfills or incinerators to keep them out of waterways as much as possible. Instead, they are nearly always dropped into sinks and toilets by hospitals, nursing homes and other long-term care facilities.

The problem is huge, because more than 365 medicines are controlled by the U.S. Drug Enforcement Administration – almost 12 percent of all prescriptions, the agency says. They include widely used narcotics, stimulants, depressants and steroids – drugs like codeine, morphine, oxycodone, diazepam (often sold as Valium) and methylphenidate (often sold as Ritalin). 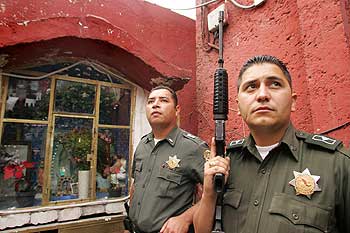 Two representatives have urged Congress to take action to address the worsening situation on the southern border which has been described by reporters and activist groups as “an all out war.”

Rep. Ted Poe, R-Humble, has urged the Congress to take action regarding the frequent incursions of military style Mexican commandos into the U.S. that has seen over 6000 deaths in the past two and a half years according to conservative estimates.

The Houston-area Republican told the House Foreign Affairs Committee that members of Mexico’s elite counter-narcotics teams, trained at Fort Benning, Ga., have defected and are now in the pay of drug cartels.

Poe highlighted the fact that the guerrilla-style commandos are regularly crossing the border into the U.S. and have been involved in violence and killings as far north as Dallas.

The San Francisco Chronicle has picked up the story:

He said the Department of Homeland Security had documented “over 250 incursions by suspected military forces” into the United States over the past decade.

“I was surprised to hear that the United States has trained Mexican forces and some of those have deserted and become the reason for these attacks,” Poe said.
Congressman Poe criticized the lack of oversight on current programs to assist law enforcement in Mexico and central America:

“It seems as though the United States has a history in some cases of giving support (to Mexico) and that support turns around and is used against the very people we’re trying to protect, in this case, us,” Poe said. “We have no assurance that the equipment we’re sending to Mexico won’t be turned over to the drug cartels and used against us.”

Another Congressman, Rep. Michael McCaul, R-Austin, called border drug violence “an imminent security threat right on our doorstep” and compared the urgency of situation to that of the wars in Iraq and Afghanistan.

Of the 96 people arrested, 75 were students. Eighteen of the students were arrested Tuesday when nine search warrants were executed at various locations including fraternities, said Jesse Rodriguez, San Diego County assistant district attorney.

The undercover probe, dubbed Operation Sudden Fall, was sparked by the cocaine overdose death of a student in May 2007, authorities said. As the investigation continued, another student, from Mesa College, died Feb. 26 of a cocaine overdose at an SDSU fraternity house, the DEA said.

Those arrested included a student who was about to receive a criminal justice degree and another who was to receive a master’s degree in homeland security.