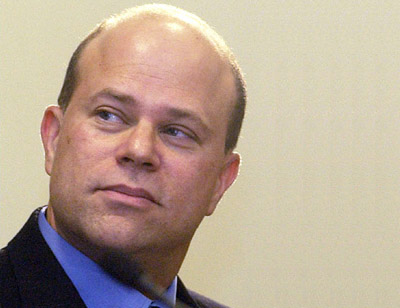 At the start of Q4 2014, Appaloosa’s David Tepper made a series of statements – dismissing Bill Gross as irrelevant (nope – turmoil caused by PIMCO unwinds roiled credit markets), calling the end of the bond bull market (nope – yields went on make lower and lower lows), and finally proclaiming that stocks were inexpensive and multiples not high. So, one wonders, if stocks were inexpensive and multiples not high, why did Appaloosa dump 40% of its US equity exposure in that quarter (only to end the quarter with even more exuberance proclaiming that stocks could rise another 10% in 2015)? It appears that when David Tepper says “buy”, he means “buy… from me.”

It has been a while since Tepper warned of “nervous time” and told his hedge fund pals “don’t be too freakin’ long.”

Since then the manipulated equity market bubble has gone straight up with every single dip bought massively by the algos, in the process surely eliminating any nervous thoughts Tepper may have had. So in a world starved for pundit philosophy, Bloomberg just reported that the bond market bubble is about to pop, at least according to the folicularly challenged billionaire. The reason, paradoxically enough, the ECB’s decision to monetize private assets and cut rates.

Read moreDavid Tepper Is Back, Sees “Beginning Of The End” Of Bond Bubble

For everyone curious how the market’s favorite “balls to the wall” barometer did in the second quarter (which ended 45 days ago), here is the full breakdown.

First the notable liquidations: in the three months ended June 30, Tepper closed his SPY and QQQ Call positions, which had a total notional equivalent of over $1.5 billion, as well as liquidating his stakes in QCOM, JPM, Metlife, Trinity, Delphi, Hess, Valmont, Ingersoll-Rand, Omincom and Beazer.

When it comes to returns, 2013 will be best remembered as the fifth consecutive year in which the S&P 500, lead by Chief Risk Officer and Portfolio Manager Ben Bernanke (replaced by Janet Yellen in 2014 following a bumper 30%+ year), outperformed over 90% of all hedge funds, which as the recent beta blow up has shown, have virtually no original “alpha” ideas, and all merely piggyback on the same high beta “greater fool”, hedge fund hotel trades and/or lever on beta as much as their Prime Broker will allow them (in many cases quite a lot).

And yet, hedge fund investors were perfectly happy to keep handing over 20% of their upside and paying a 2% management fee when they could have generated the same returns for free by simply buying the SPY ETF.

According to a just released ranking by Institutional Investor magazine, The 25 top earners of 2013 raked in a total of $21.15 billion. That’s roughly 50 percent more than the 25 best-paid managers reaped in each of the previous two years. Four managers earned more than $1 billion, while a fifth just missed that distinction. To qualify for the list, a manager needed to have earned at least $300 million in 2013, or 50 percent more than the 2013 cutoff.