David Cameron has disclosed that Barack Obama “tucked him up in bed” aboard Air Force One during his recent trip to the United States. 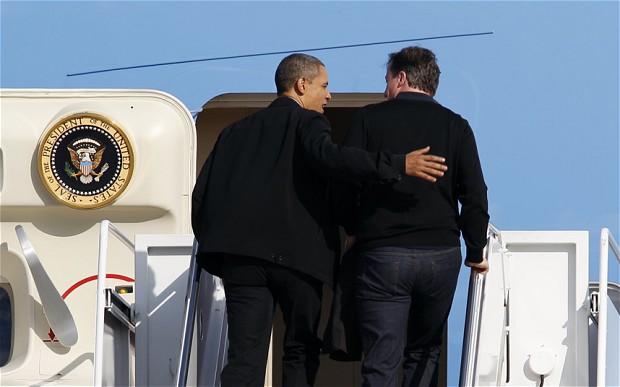 The Prime Minister said the US President offered him use of his bed on the plane as the pair flew back to Washington after watching a basketball match in Dayton, Ohio last week.

Mr Cameron said: “On the way back, it was about 4 o’clock in the morning UK time, so he said ‘David, why don’t you use my bed and put your feet up’.

“So I duly did and Barack went to the back of the plane and explained to my private secretary and the team, he said ‘Don’t worry, the British Prime Minister is fine, I’ve just tucked him up in bed’.

“I don’t think that’s happened before.”

Speaking at a business awards ceremony in his Oxfordshire constituency filmed by Witney TV, Mr Cameron likened the anecdote to amusing situations Sir Winston Churchill and Baroness Thatcher experienced alongside their US counterparts.

He said: “I think all Prime Ministers and Presidents like to think they bring something to the special relationship … a special anecdote.

“We remember the story of Winston Churchill when he stayed in the White House and he was in the bath. Roosevelt walked into the bathroom and Churchill stood up and said ‘The British Prime Minister has nothing to hide from the President of the United States’.

The Euro’s future has been dealt a severe blow at eleventh hour talks in Brussels, as the UK refused to sign up to new EU treaties, leaving the rest of Europe to figure out a different approach. Marathon overnight talks mean the core Eurozone states will now make any further agreements among themselves, while other European countries can still join in to work out budget rules and changes. Max Keiser, financial analyst and the host of the ‘Keiser Report’ here on RT, says PM Cameron wants the whole world tolerate London as capital of fraud and sponsor it.

But after 11 hours of bad-tempered talks, Mr Cameron said that he had blocked the changes because France and Germany had refused to agree to a “protocol” giving the City of London protection from a wave of EU financial service regulations related to the eurozone crisis.

Britain was left isolated this morning with just three other countries, Sweden, Hungary and the Czech Republic, as an exultant Nicolas Sarkozy hailed a “historic” breakaway “euro plus” bloc that would pursue fiscal and economic union via a new treaty outside the EU.

The Prime Minister insisted that he had been prepared to support treaty change among all 27 of the EU’s members to allow the 17-strong eurozone to take measures to tackle its debt crisis and to enforce tough new fiscal rules for the single currency.

But after 11 hours of bad-tempered talks, Mr Cameron said that he had blocked the changes because France and Germany had refused to agree to a “protocol” giving the City of London protection from a wave of EU financial service regulations related to the eurozone crisis.

It is not Germany who is calling the shots here, but the same elitists that control the US, the UK etc. and brought Hitler to power.

The name of their organizations may change, but the elite families ruling them from behind the scenes and their goals are still the same.

A HUGE European superstate is the only solution to the economic crisis engulfing the continent, the President of the European Commission declared today.

Britain will have to abandon the pound and join the single currency “faster than people think”, Germany’s finance minister has said.

Wolfgang Schäuble said that, despite the current crisis in the eurozone, the euro will ultimately emerge as the common currency of the entire European Union. He said he “respects” Britain’s decision to keep the pound, but insisted that the survival and eventual stabilisation of the euro will convince non-members to join the currency club. “This may happen more quickly than some people in the British Isles currently believe,” he added.

Mr Schäuble also said Germany will stand firm on its call for a financial transaction tax that Britain believes would badly harm the City of London.

Meanwhile, a leaked document seen by The Daily Telegraph yesterday showed Berlin has drawn up radical plans for an intrusive new European body which will be able to intervene directly in beleaguered countries.

Sir John Major, the former prime minister, warned last night that the growing integration of the eurozone nations threatens democracy in those countries. He told Al Jazeera television that richer euro members led by Germany and France will “insist on moving towards what we call fiscal union. By that I mean common control over budgets and fiscal deficits”.

Sir John, who advises David Cameron on foreign policy issues, also described the banking transaction tax as “a heat-seeking missile proposed in continental Europe, aimed at the City of London”.

BRITAIN will soon be forced to scrap the pound and join the euro, one of Germany’s most senior figures said yesterday.

In a chilling threat to UK sovereignty, German finance minister Wolfgang Schauble predicted that all Europe would one day use the single currency. “It will happen perhaps faster than some in the British Isles currently believe,” he said.

His sinister warning followed the emergence of a secret German plan to build a powerful new economic government for the eurozone and block an EU referendum in Britain.

A leaked German foreign ministry memo detailed plans for a new European Monetary Fund. It also claimed the EU’s treaty could be altered to centralise more power without triggering a vote.

In a further sign of growing German supremacy within the EU, David Cameron was yesterday rebuffed by Chancellor Angela Merkel in talks over how to tackle the euro crisis.

The killing of Muammar Gaddafi at the hands of NATO-backed, Al Qaeda-linked forces marks the end of a campaign expressly aimed at the assassination of a head of state and overthrow of a sovereign country in direct violation of international standards that have held sway since the Nuremberg trials at the end of World War II and the establishment of the Geneva Conventions.

The NATO campaign, known as “Operation Unified Protector,” was a continuation of the US-led Operation Odyssey Dawn. It formally began on March 23rd, 2011 and was ostensibly an operation to enforce United Nations Security Council resolution 1973. From the outset, the NATO coalition partners insisted that the aim of the mission was not to assist a rebel insurgency in overthrowing the Gaddafi government, but to “protect civilians” in accordance with UN resolutions.

The real intention of the operation was revealed shortly thereafter, however, in a joint op-ed in the pages of the International Herald Tribune penned by Obama, Cameron and Sarkozy:

Read moreThe Assassination of Gaddafi & The Destruction Of Libya (Video)

﻿Lord Hesketh says he lost faith in the party after the Prime Minister reneged on his promise to hold a referendum on the Lisbon Treaty.

Before the general election, Mr Cameron gave a ‘cast iron’ pledge to hold a referendum on the Lisbon Treaty.

– Awareness of Bilderberg Cabal Explodes in 2011 (The New American):

Anecdotal evidence also suggests the group plays an important part in the seemingly unexplainable rise to power of national leaders. Bill Clinton, for example, attended the conference in 1991 as a virtually unknown state governor. The following year he became President. Then-presidential candidate Barack Obama was reportedly there in 2008. British Prime Minster David Cameron and former PM Tony Blair both went to Bilderberg before rising to the top as well. So did a multitude of global power brokers too long to list.

David Cameron has rejected calls for a referendum on Europe ahead of a Commons debate on the subject next week.

At Prime Minister’s Questions, he said he shared MPs’ frustrations with how the European Union worked but would oppose calls for a vote on whether to quit the EU as it was “not our policy”.

Up to 50 Tory MPs could potentially rebel against the government.

Remember that the Irish people had to vote twice on the Lisbon Treaty, because their first vote was ‘wrong’ and NOT in favor of the elitists’ agenda.

– What part of Ireland’s ‘no’ does the EU not understand?:

Asking the Irish to vote again on the Lisbon treaty is arrogant, insulting and undemocratic

As soon as the Irish people’s ballots were counted in June, their rejection of Lisbon was treated as the “wrong” answer, as if they had been taking part in a multiple-choice maths exam and had failed to work out that 2+2=4. Now, they will be given a chance to sit the exam again, “until [they] come up with the right answer,” says George Galloway, attacking EU elitism. The notion that the Irish “got it wrong” exposes gobsmacking ignorance about democracy in the upper echelons of the EU. The very fact that a majority of Irish people said no to Lisbon made it the “right answer”, true and sovereign and final. “No” really does mean no.

– I’m quitting the Tories for UKIP, says ex-treasurer Lord Hesketh after he loses faith in the party (Daily Mail, Oct. 11, 2011):

A former Tory treasurer has defected from the Conservatives to the UK Independence Party over David Cameron’s handling of Europe.

Lord Hesketh says he lost faith in the party after the Prime Minister reneged on his promise to hold a referendum on the Lisbon Treaty.

In an interview with the Daily Mail, the former Conservative fundraiser said he would now devote his efforts to drumming up funds for UKIP.

Before the general election, Mr Cameron gave a ‘cast iron’ pledge to hold a referendum on the Lisbon Treaty.

In this edition of the show, we are have secured the Bolivian Ambassador to the UK to talk about double standards in US foreign policy.

She will also talk about the expulsion of the US Ambassador from Bolivia.

A series of severance payments were made to former News of the World editor Andy Coulson for several months after he began working for the Tories, according to the BBC.

The instalments totalled the full entitlement under his two-year contract as editor of the now defunct tabloid which was published by News International, the BBC claimed.

Two men in Britain have been sentenced to four years in jail for trying to stir up last week’s rioting using Facebook. Both men posted messages on the social networking site calling for their friends to join in the unrest. They later said it was just a joke and no rioting broke out as a result of their posts. RT talks to investigative journalist Tony Gosling.