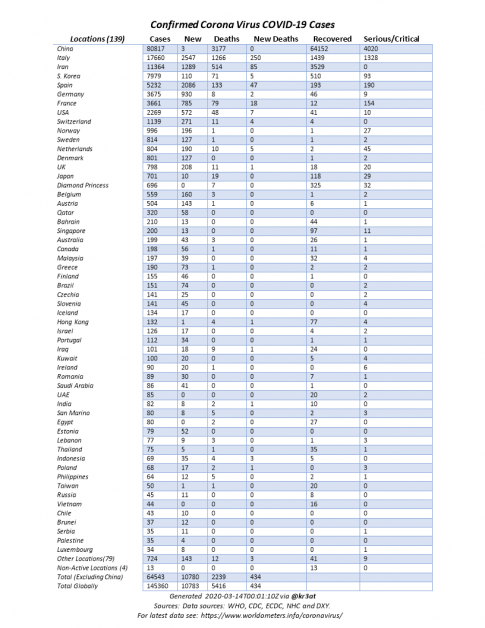 #Spain Declares National Emergency As PM Warns 'We Could Have 10,000 Cases By Next Week'

She and the Prime Minister will be self-isolating for 14 days.https://t.co/pQWIWJ6leg#BreakingNews #Coronavirus #CoronavirusOutbreak #COVID19 #COVIDー19 #COVID_19 #COVID2019 #Collapse

How bad can it get if the rest of the world does not go full-China in terms of authoritarian crackdowns?https://t.co/S3bx7Yk1uA#BreakingNews #Coronavirus #CoronavirusOutbreak #COVID19 #COVIDー19

#BREAKING: #Miami Mayor @FrancisSuarez tested positive for the new #Coronavirus in a case linked to the #Brazilian delegation that spent time in the state over the weekend.

The government will continue running, Suarez said. He will lead the city remotely. https://t.co/Qlfj760g6s

Brazilian Presidency: Bolsonaro Has Tested Negative For Covid-19 After Widespread Reports Of Positive

Bolsonaro's office pushing back hard after major Brazilian newspapers said he was confirmed for coronavirus.https://t.co/rmepE0iiAj#BreakingNews

Exclusive: A spike in #coronavirus cases could overwhelm U.S. hospitals by the end of March, Defense Department monitoring shows https://t.co/pU0QNUYDvu

"We're Pulling Out All The Stops": #Trudeau Promises To Help Canadians With Their Bills As He Leads Nation From Home

He's doing everything in his power…except closing borders and stopping flights.https://t.co/dhJXYk5eRZ#BreakingNews #Canada

Yes, and confirmed cases will rise by the tens of thousands in no time…

Fauci 'Optimistic' #Coronavirus Testing System Will Be Fixed Within 'The Next Week Or Two'https://t.co/sg7uswSD8l#BreakingNews #CoronavirusOutbreak #COVID19 #COVIDー19 #COVID_19 #COVID2019 #Collapse

When Will Authorities 'Lockdown' America (& How Long Will Quarentine Last)? Here's What The Patterns Show Us

France will, from next week, close all nurseries, schools and universities to try to curb the spread of #coronavirus, President Emmanuel Macron said in a televised address https://t.co/8yogGkheXQ pic.twitter.com/BACDWklT3E

Boris Johnson says the #coronavirus outbreak "is the worst public health crisis in a generation" and that it's wrong to compare it to seasonal flu.

Serbian President struggles to answer a question about #coronavirus as he can't stop coughing pic.twitter.com/DYfZVmTbRN

Read more‘US Army Behind Covid-19 In Wuhan’: China’s Foreign Ministry Levels Bombastic Charge – Trump Bans All Travel From Europe For 30 Days; Tom Hanks Infected; NBA Suspends Season – France will, from next week, close all nurseries, schools and universities to try to curb the spread of coronavirus, President Emmanuel Macron said in a televised address – “Many more families are going to lose loved ones before their time”: Boris Johnson says the coronavirus outbreak “is the worst public health crisis in a generation” and that it’s wrong to compare it to seasonal flu – Serbian President struggles to answer a question about coronavirus as he can’t stop coughing – Italy closes Catholic churches, Slovakia closes all borders, international airports – NCAA Cancels “March Madness”, NYC Declares “State Of Emergency 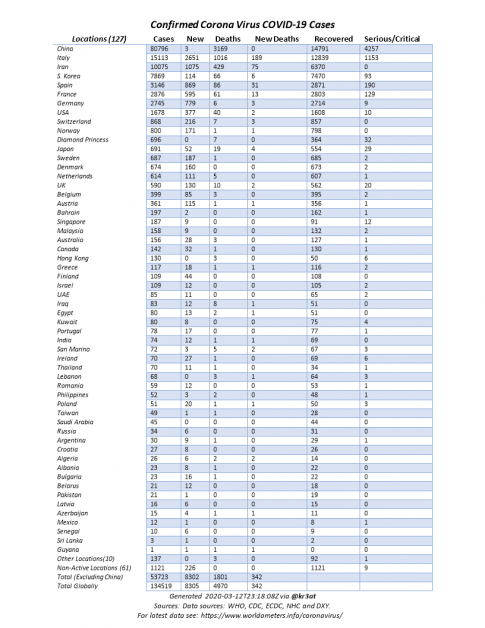 Must-read: From The Coronavirus Crisis Area: “Tsunami That Overwhelmed Us”… The Desperate Report Of An Italian Doctor

– Dr. Fauci Warns “Worst Is Yet To Come”: Coronavirus Is “10x More Lethal Than The Flu,” Could Infect “Millions” Of Americans

To date a total of 4,585 deaths and 124,968 total #covid19 cases have been confirmed worldwide.#CoronaVirusOutbreak pic.twitter.com/gC05dFI8vL

#WHO Declares #COVIDー19 A Pandemic, Deeply Concerned At "Alarming Level Of Inaction"

…we are deeply concerned both by the alarming levels of spread and severityhttps://t.co/dRuEdLvcJU#BreakingNews #Coronavirus #CoronavirusOutbreak #COVID19 #COVID_19 #COVID2019 #Collapse

Here’s how Trump can end the coronavirus epidemic in just 30 days… (Hint: You won’t like it, and our republic may not survive)https://t.co/fcvJv0F9MK#BreakingNews #Coronavirus #CoronavirusOutbreak #COVID19 #COVIDー19 #COVID_19 #COVID2019 #USA #Collapse #Collapse

The victim was a woman over the age of 60 who died after contracting the virus…https://t.co/JMmS4wX0fF#BreakingNews #Coronavirus #CoronavirusOutbreak #COVID19 #COVIDー19 #COVID_19 #COVID2019

US Senators To Ask Trump To Issue National Emergency Declaration For Cor… https://t.co/sLahxq4ykN via @YouTube

Coming to a country near you…

Google translation down below.

Google translation of the article:

– From the Corona Virus Crisis Area: “Tsunami that overwhelmed us” – the desperate report of an Italian doctor

Daniele Macchini works in a hospital in Bergamo in northern Italy. He sends a warning to his compatriots: do not underestimate the virus.

On Friday, Daniele Macchini had enough. The resident in the coronavirus risk region of Lombardy , in which the city of Milan is located, did not want to remain silent.

His reality in the “Humanitas Gavazzeni” hospital in Bergamo was too different from that of many people “outside”, he found. He means those who complain about restrictions on their everyday life on social media or ignore the advice to leave the house only in an emergency.

Macchini, actually a general surgeon, wrote a detailed entry on his Facebook page about how he experienced the pandemic in the hospital. The post had been shared almost 30,000 times by Tuesday noon.

“The war has literally exploded and the battles are ongoing, day and night,” Macchini writes. The war he means is the fight against the coronavirus-induced disease Covid-19.

“A week ago our current enemy was still in the shade”

The corona virus has hit Italy worst in Europe so far; freedom of movement is now restricted across the country, and it is no longer just the regions in the north of the country that are particularly affected that are blocked.

A week ago he was amazed at the reorganization of the entire hospital, Macchini writes. At that time, “our current enemy was still in shadow”.

The wards were slowly literally “emptied”, non-acute measures were interrupted, the intensive care unit released to create as many beds as possible. Containers for infected arrivals were set up in front of the emergency room to avoid possible infection. In the corridors of the clinic there was “an atmosphere of surreal silence and emptiness”.

The doctors had been waiting for a war “that had not started yet and of which many (including myself) were not so sure whether it would ever come so wildly.”

He remembers the night shift in which he did nothing except wait for the test result of the first suspected coronavirus case. “When I think about it, my excitement about a possible case seems almost ridiculous and unjustified now that I’ve seen what happens,” he writes in retrospect.

And then it just exploded, the war. “One by one, the unfortunate poor come to the emergency room. You have anything but the complications of a flu. Let us stop saying that it is bad flu, ”Macchini writes.

“In the two years here I have learned that people in Bergamo don’t come to the emergency room for nothing. They did it well this time too. They followed all the advice given: a week or ten days at home with a fever, without going out and risking infection from others. But now they can’t take it anymore. They don’t breathe enough, they need oxygen. “

Read moreFrom The Coronavirus Crisis Area: “Tsunami That Overwhelmed Us”… The Desperate Report Of An Italian Doctor