In a unanimous ruling, the United States Supreme Court ruled today that human genes cannot be patented. The ruling invalidates the thousands of patents that have already been granted on human genes, including the patent by Myriad Genetics on the BRCA breast cancer genes which the company says no one else can research or even detect without paying it a royalty. Click here to read the complete ruling.

“Myriad did not create anything,” said Justice Clarence Thomas. “To be sure, it found an important and useful gene, but separating that gene from its surrounding genetic material is not an act of invention.”

Well, exactly. This point should have been obvious to the lower courts, too, but in today’s world of corporate domination over seemingly everything, gene industry lawyers were able to argue that patent protection would somehow inspire more innovation and research. “The biotechnology industry had warned that an expansive ruling against Myriad could threaten billions of dollars of investment,” wrote Reuters.

Throw Clarence Thomas Off the Bench 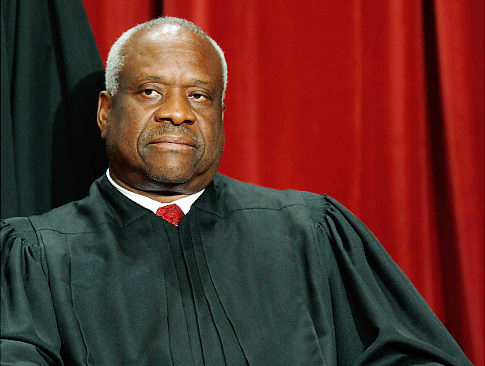 NEW YORK – The Supreme Court justice broke the law by not disclosing his wife’s $700K think-tank payday. Paul Campos on Clarence Thomas’ “preposterous” defense and why he likely won’t be punished.

The criminal-law scholar George Fletcher once quipped that the maxim “ignorance of the law is no excuse” is one of the few fundamental principles of law that most people actually know. As harsh as this principle may sometimes be when applied to ordinary citizens, applying it to justices of the Supreme Court seems only reasonable.

Thus it’s difficult to feel sympathy for Clarence Thomas, as he finds himself embroiled in a controversy over his failure to reveal the sources of his wife’s non-investment income (or indeed that she even had any such income). The 1978 Ethics in Government Act requires all federal judges to fill out annual financial-disclosure forms. The relevant question on the disclosure form isn’t complicated: Even if Justice Thomas wasn’t a lawyer, he shouldn’t have needed to hire one to explain to him that the box marked NONE next to the phrase “Spouse’s Non-Investment Income” should only be checked if his spouse had no non-investment income.

In fact Ginni Thomas was paid nearly $700,000 by the Heritage Foundation, a “conservative think tank,” between 2003 and 2007, as well as an undisclosed amount by another lobbying group in 2009. Justice Thomas’ false statements regarding his wife’s income certainly constitute a misdemeanor, and quite probably a felony, under federal law. (They would be felonies if he were prosecuted under 18. U.S.C. 1001, which criminalizes knowingly making false statements of material fact to a federal agency. This is the law Martha Stewart was convicted of breaking by lying to investigators.)

Thomas’ defense is that he didn’t knowingly violate the law, because he “misunderstood” the filing requirements. This is preposterous on its face. Bill Clinton was impeached—and subsequently disbarred—for defending his false statements about his affair with Monica Lewinsky with an excuse that wasn’t as incredible as the one Thomas is now employing.

Bill Clinton was impeached—and subsequently disbarred—for defending his false statements about his affair with Monica Lewinsky with an excuse that wasn’t as incredible as the one Thomas is now employing.

Appropriately, a complaint has been filed with the Missouri Bar Association, of which Thomas is a member, demanding that Thomas be disbarred for lying to the federal government about his wife’s financial dealings.

It’s unlikely that Thomas will be disbarred, and even less likely that he’ll be prosecuted, even though his conduct has been outrageous. That Thomas failed to disclose his wife’s sources of income is not a trivial technicality: His wife’s employment created excellent grounds for requiring him to excuse himself from hearing the Citizens United case, which overturned federal campaign-finance laws—much to the delight of Ginni Thomas’ right-wing paymasters, who are now freer than ever before to purchase the best laws money can buy. (Federal judges are required to recuse themselves from hearing any case in which they or their spouses have any financial interest.)