On Feb. 18, Israel’s Prime Minister along with his Foreign and Defence Ministers hatched a plot to keep Libyan strongmen Muammar Gaddafi in power and his opponents dead or wounded. The big three would use Israeli taxpayers’ money to hire mercenaries to slaughter any Libyan who wanted anew leader. 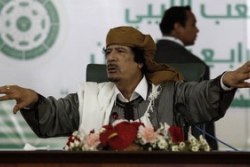 (ANSAmed) – ROME, MARCH 1 – With approval from the government in Tel Aviv, an Israeli security firm is responsible for sending groups of African mercenaries to Libya to fight the protestors who have been calling for the fall of the Gaddafi regime for the last two weeks, reports Al Jazeera’s website, citing a source in the Israeli press. The journalist from Israeli daily Yediot Ahronot, who prefers to remain anonymous, said that according to speculation in the security sector, Israel looks at Libya from a strategic perspective and in terms of security. The fall of Gaddafi would open the door for an Islamic regime in Libya, accordingto speculation. In a meeting on February 18, Prime Minister Netanyahu, Defence Minister Barak and Foreign Minister Lieberman decided to recruit African mercenaries to fight alongside Gaddafi, according to the journalist. During the meeting, they decided to let General Israel Zef, the director of security firm Global CST, which is active in many African countries, to make a group of paramilitary mercenaries from Guinea, Nigeria, Central Africa, Mali, Senegal, Darfur and Southern Sudan available to Abdullah Assinousi, one of the heads of Libya’s intelligence agency.

In just a few weeks, Libya was crawling with guns for hire, many without knowledge that their paychecks originated at the Bank of Israel. How could Israel justify the ongoing massacre of Libyan civilians by its hired guns? Because Ghaddafi’s defeat would mean an Islamist government, though it’s anybody’s guess if that is even the case. Meanwhile in Israel, the police shot 15 Jews at Havat Gilad with experimental crowd-control bullets, while most of the population was too shell-shocked by never-ending poverty and debt to even care. Would they care if they knew their taxes were paying hundreds of mercenaries $300 to $2000 bucks a day to shoot Libyans? Nah, not when there’s the mortgage to be paid and children to feed. Israelis are too worn down and out to care that their government is risking huge international censure for prolonging the Libyan civil war.

Gaddafi is said to have lured some 25,000 mercenaries to quash a popular revolt against his regime. The head of the Libyan Human Rights League Ali Zeidan says Chad is leading this group of foreign fighters including citizens from Niger, Mali, Zimbabwe and Liberia who are being paid between $300 and $2,000 a day. While most of these governments have denied their nationals are fighting as mercenaries in Libya, Mali officials have confirmed hundreds of young Tuaregs from Mali and Niger have been recruited by Gaddafi.

There are fears that Libya’s uprising against Muammar Gaddafi’s rule is turning into a protracted civil war. Witnesses say government forces have recaptured the town of Bin Jawad from the rebels.

Anti-government fighters claim to be in control of Zawiyah just 50 kilometres west of the capital Tripoli, but forces loyal to the Libyan leader have been counter-attacking with considerable power.

Rebel leaders said they fought off three assaults by government tanks and infantry over the weekend, each one bigger than the last.

Greece should have defaulted on its debt and have the banksters and stupid investors eat the losses.

Instead the people in Greece and the EU will be presented with the bill of this crisis, that was created by corrupt elite criminals.

The people of Greece know this:

The entire bailout was totally unconstitutional.

Greece’s austerity measures cannot prevent default and will lead to a breakdown of the political order if continued for long, a leading German economist has warned.

“This tragedy does not have a solution,” said Hans-Werner Sinn, head of the prestigious IFO Institute in Munich.

“The policy of forced ‘internal devaluation’, deflation, and depression could risk driving Greece to the edge of a civil war. It is impossible to cut wages and prices by 30pc without major riots,” he said, speaking at the elite European House Ambrosetti forum at Lake Como.

“Greece would have been bankrupt without the rescue measures. All the alternatives are terrible but the least terrible is for the country to get out of the eurozone, even if this kills the Greek banks,” he said.

Dr Sinn said Greece is an entirely different case from Spain and Portugal, which still have manageable public debts and can bring their public finances back into line with higher taxes.

“Greece would have defaulted in the period between April 28 and May 7, had the money not been promised by the European Union,” he said, describing the failure of the EU’s bail-out strategy to include a haircut for the banks as an invitation to moral hazard.

“There should be a quasi-insolvency procedure for countries. Creditors have to accept a haircut before any money flows for rescue plans, otherwise we’ll never have debt discipline in the eurozone,” he said.

Do you really think that anyone who’s ever made a loan or grant to any dictator, anywhere in the world, has any doubt about what is going to happen with the money?

Sure, Bono is an idiot, people will say. Woops. Silly Bono.

While there are lots of idiots in the world, not many of them just happen to be A) responsible for genocide, directly, indirectly or otherwise and B) an honorary Knight Commander of the Most Excellent Order of the British Empire.

It’s all a coincidence, of course. As usual.

London-based Napoleoni, in Auckland to appear at the Writers & Readers Festival, has written two books, Terror Inc: Tracing the Money Behind Global Terrorism and Insurgent Iraq: Al-Zarqawi and the New Generation, on the economics of terrorism.

Her latest book, Rogue Economics, studies the destabilising effect of economic globalisation, focusing in part on why more than half a trillion dollars worth of aid sent to Africa since the 1960s failed to reach the intended destination – developing the nations’ economies.

That huge amount of aid, which includes money from the United Nations and donations generated by Live Aid for Ethiopia, organised by Geldof, and the Live 8 concert in 2005, organised by Bono, has instead “served as a rogue force, notably as an important form of terrorist financing” in countries such as Ethiopia, Somalia, Sudan, Zimbabwe, Tanzania and Kenya. Ethiopia, for example, received $1.8 billion in foreign aid between 1982-85, including a large contribution from Live Aid; $1.6 billion of that, she points out, was spent on buying military equipment.