There are going to be civil wars all across the Western world before #WW3. In the USA they'll likely have the worst revolution of all time. https://t.co/DP0XPYS9G5

Alois Irlmaier foresaw this in around 1950:

Prepare for civil war in in Europe …

After the coming financial collapse civil war and revolutions will break out in Germany, Italy, France, the UK, the U.S. …

The imminent US civil war is predicted to be so bad that not even return of troops from abroad will keep the peace.https://t.co/7gjIbNKlry

As predicted by Nicolaas “Siener” van Rensburg (born 1864 – 1926), who foresaw WW1, WW2, the migrant crisis and a white President (Donald Trump) taking over from a black President (Barack Obama) many years ago.

– White South Africans Are Preparing For “Removal of All Whites Within Five Years”:

Back in March, the President of South Africa made a shocking suggestion, which left many white landowners fearing that they may face a race war in the near future. In a speech, Jacob Zuma announced that he wanted the government to begin confiscating white owned lands, before redistributing them to black South Africans.

Zuma wants a “pre-colonial land audit of land use and occupation patterns” to help decide which lands need to be taken, and has said that “We need to accept the reality that those who are in parliament where laws are made, particularly the black parties, should unite because we need a two-thirds majority to effect changes in the constitution.”

If you have read his predictions, the only logical conclusion is that he has meant the US.

An enormous amount of people will die …

US seer John Koyle also seems to have seen this. From the article: "two out of every three would die or be killed".https://t.co/ou2KQmmzco

I try to help you to prepare for what is (probably) coming.

Please support my work, so that I can better prepare myself, because when the SHTF it is probably too late to do so.

– The Simple Reason Why a Second American Civil War May Be Inevitable:

America has always had its divisions, and Americans have never really been a monolith. We’ve always been a nation of many nations. The culture of New England is different from the culture of the Deep South, which is different from the cultures in the West Coast or the Midwest. People living in the cities have different beliefs than people who live in the countryside. Within those areas, there are ethnic, linguistic, and religious enclaves. It’s always kind of been like that (probably to a lesser degree in the past), and somehow we’ve been able to find enough common ground to keep this country together for more than a century.

However, something has changed. You can feel it in the air. Our nation has clearly never been this divided since the Civil War. A lot of people noticed it after the last election, but the truth is that these divisions have been deepening for decades, and they’re just now reaching a very noticeable breaking point. That’s obvious enough when you look at how the left and the right have been going at each other. It used to be a war of words, but it’s turning into something very dark.

Turkish migrants opposed to the Erdogan regime in their homeland and now living in Europe are increasingly concerned about the radicalisation of their fellow migrants, and the potential for a “civil war” in Europe.

Speaking to best-selling Austrian newspaper Kronen Zeitung, a number of Turkish migrants living in Europe have spoken out against the fermenting political and social climate among Turks influenced by the Islamist and increasingly hardline president of Turkey, Recep Tayyip Erdoğan. Speaking ahead of the April 16th referendum which if passed would see Erdoğan’s executive powers significantly strengthened, one Turkish migrant said freedom of expression was being stamped out in Turkey and those sentiments were spreading to Europe. 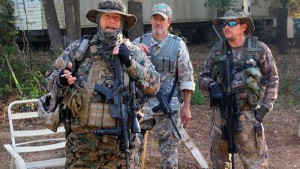 – The New New Left’s Calls for Civil War in America:

Not long ago many conservatives predicted an American “melt-down” if Hillary Clinton won the White House. Today, the Democrats who are backed by massive corporate interest, they have our nation on the brink of civil war. Radical thugs at Berkley and elsewhere openly attack anyone uttering support for the new president. Making use of an entitled generation of left extremists, the globalists make their move on American regime change.