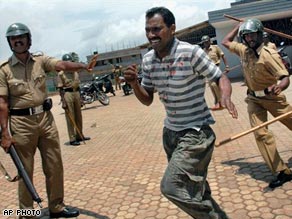 WASHINGTON, July 9 (UPI) — A 23-year-old U.S. soldier says he’s suing the Department of Defense for allegedly discriminating against him because he’s an atheist.

Army Spc. Jeremy Hall, now serving in Iraq, says he lost his Christian faith while serving two tours of duty in Iraq, causing him to be ostracized, denied promotions and almost getting him killed, CNN reported Wednesday.

Hall contends there is a pattern of discrimination against non-Christians in the military, saying, “I think it’s utterly and totally wrong. Unconstitutional.”

He told CNN that other troops threatened his life and the military assigned a full-time bodyguard to protect him, fearing for his safety.

CNN said Hall filed a federal lawsuit against the Department of Defense in March, claiming his rights to religious freedom under the First Amendment were violated. Some former military men agree, saying the Pentagon is tacitly encouraging evangelical Christian proselytizing within its ranks to create a “godly army.”

But Deputy Undersecretary Bill Carr told the broadcaster that complaints of evangelizing are “relatively rare” and that the Pentagon isn’t pushing one faith among troops.

Televangelist Rod Parsley, a key McCain ally in Ohio and his spiritual adviser, has called for eradicating Islam as a ‘false religion’.

Senator John McCain hailed Parsley, as the Ohio megachurch pastor called upon Christians to wage a “war” against Islam to destroy it.